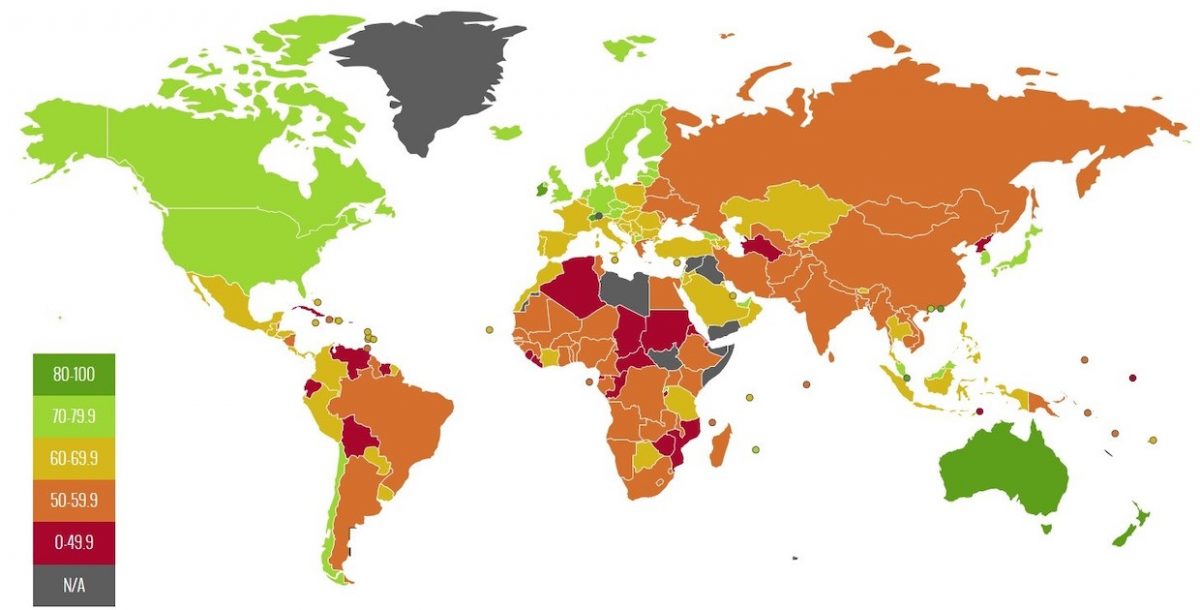 My favorite annual publication from the Heritage Foundation, the Index of Economic Freedom, has just been released.

Like the Fraser Institute’s Economic Freedom of the World and, to a lesser extent, the World Economic Forum’s Global Competitiveness Report (U.S. #1 as of 2018), the Heritage Foundation survey is filled with interesting data on economic liberty in various nations.

We’ll start by sharing the global map. It’s good to be green, especially dark green. But it’s bad to be orange and even worse to be red.

Sadly, there are only six “free” jurisdictions.

Unsurprisingly, Hong Kong and Singapore are at the top, and I’m also not surprised to see New Zealand and Switzerland in the next two positions.

What’s especially impressive is that four of the six jurisdictions managed to increase their score.

Note how the Nordic nations all get reasonably good scores. As I’ve repeatedly explained, they have onerous welfare states, but they largely compensate by being very pro-free market in other policy areas (one interesting quirk is that Iceland ranks #11 in the Heritage Index but only #59 in the Fraser rankings).

The United States, for what it’s worth, improved its score but still doesn’t crack the top 10.

Since a majority of readers are from the United States, let dig into the details.

Here’s a breakdown of America’s score. I am befuddled at how the U.S. improved on government spending, but all the other variables make sense.

Pay special attention to the decline in trade freedom.

Now let’s look at a few other countries that merit special attention.

Here’s data for the past 15 years on Iceland, Taiwan, and Chile.

I include Iceland merely because I’m intrigued by the wide divergence in how the country is ranked by Heritage and Fraser.

And I include Chile because I’m worried about the decline in recent years.

Taiwan, meanwhile, deserves mention because it continues to slowly but surely improve – a process that hopefully won’t stop, thus allowing Taiwan to eventually converge with Hong Kong and Singapore.

I’ve been a big fan of Estonia, Latvia, and Lithuania, but I’ve been worried about a recent drift in the wrong direction.

And that’s apparent in the Heritage data. This worries me since those countries should be further liberalizing and reforming to help counteract grim demographic trends.

By the way, I have similar concerns about Slovakia, though that nation’s drift in the wrong direction started several years sooner

Let’s close our discussion by looking at the unfortunate nations in the bottom category.

If you guessed the North Korea was the most repressed of the “repressed” nations, congratulations. It’s not just that it’s in last place, it wins that dubious distinction by a wide margin.

Though at least the North Koreans are trending in the right direction, albeit with an almost-too-small-to-measure improvement of just 0.1.

Cuba is #178 out of #180, yet still managed to go from absolutely awful to breathtakingly terrible with a -4.1 change in its score.

Speaking of awful and terrible, Venezuela is next to last. It remains even below Cuba, notwithstanding a small increase of 0.7.

The Best and Worst Cities in the United States