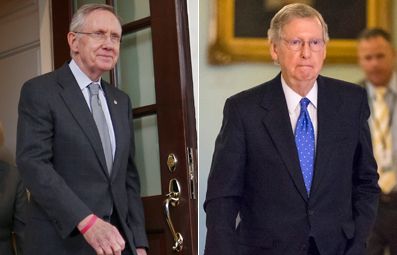 When comparing a new March 2014 WaPo with a March 2010 WaPo poll, it would seem apparent that it is likely Democrats will be in for a long night come Election Day in the 2014 midterm elections.

I have been beating the drum for weeks regarding what is either an inability or unwillingness by media pundits to acknowledge the political reality of the upcoming 2014 midterm elections. A lot can happen between now and Election Day, as is often the case in politics, but all of the data point to a long, dark night for the Democratic Party. The new ABC News/WaPo poll is just the latest piece of data that spells big, big trouble for Democrats in 2014.

On its surface it doesn’t look all that bad. In fact, the ABC News/WaPo poll found a near even split with 46 percent of registered voters saying they would vote for the Democrat and 45 percent saying they would vote for the Republican. When we look at individual issues tested in the poll, it gets even rosier for Democrats. On health care, the one issue the Establishment GOP wants the midterm elections to focus on, Democrats enjoy a supposed 44 percent to 36 percent advantage. Voters by a margin of 68 percent to 28 percent say the Republican Party is out of touch, while they are split evenly at 48 percent over Democrats.

So, what can account for the tightness of the overall race and what would appear to be a large Democratic advantage inside the numbers?

Looking back at this pollster’s particular record, the answer seems dubious. Just one month before Republicans made historic gains in 2010, in their own words, “this indicator still showed narrow support for the Democrats.” At this point in 2010, Democrats led the March WaPo poll by 47 percent to 43 percent (a 4-point lead as opposed to 1-point now), and also led Republicans on every major issue. Let’s take a look at data from that poll in the table below.

I hardly think I have to go line-by-line to make my point, but I will note the 13-point lead Democrats had on health care. In fact, the WaPo poll found just a 47 percent to 51 percent disapproval margin for ObamaCare, and shockingly all of the enthusiasm was on the side of reform. Thus, when we see the recent survey found that 36 percent say they are less likely to support a candidate who favors ObamaCare, while 34 percent say they are more likely to support such a candidate, we can make a grim conclusion about Democrats’ prospects.

As far as the House, because of the amount of congressional districts held by members of one party that voted for the other party’s presidential nominee, and due to the fact Republicans’ gains in 2010 mean there are fewer opportunities in 2014, Republican pickup opportunities are likely to be limited. As of now, Democrats lead on the PPD average of generic ballot polling by just .2 percent, and according to our model, Democrats would need a national lead somewhere in the neighborhood of 12 to 14 points to even be competitive (you can view our averages and model simulations here).

The Senate data, on the other hand, suggest we will likely see fairly dramatic Republican gains. According to the model used to assign ratings to our 2014 Senate Map Predictions, the Republican Party is favored to win control of the U.S. Senate, with a likely net gain of at least 6 — 9 seats, and a less likely net gain of as many as 9 — 13 seats. In the new ABC News/WaPo poll, testing the 34 states with Senate races, 50 percent of voters say they will vote for the Republican candidate and only 42 percent say they’ll vote Democrat.

This is getting a bit warmer to actual reality. Reality, itself, is up for sale in these polls. And the American people should never forget it. When we draw closer to Election Day, pollsters typically begin to poll more accurately, which is no coincidence. From now until then, however, they will attempt to use survey findings to shape the elections, or create an “air of inevitability” for Democratic control.

For instance, while the media made a huge poll push showing support for amnesty or a “path to citizenship” when the Senate bill was being debated, now 38 percent say they are less likely to vote for someone who favors a path to citizenship, while just 30 percent say they would be more likely. We have reported on the support for “immigration reform” bottoming out recently on PeoplesPunditDaily.com, but it is just one of the many issues this method has been applied to in an effort to sway public opinion.

Perhaps, we could say that the most beautiful aspect to the 2010 midterm elections, historically, was that the American people forced the liberal “mainstream” media to release poll findings, albeit late, which would comport with public opinion, rather than release findings to shape it. If the data holds, which there is nothing right now to suggest it won’t, then it will again be the case in 2014.

And that spells big trouble for Democrats.