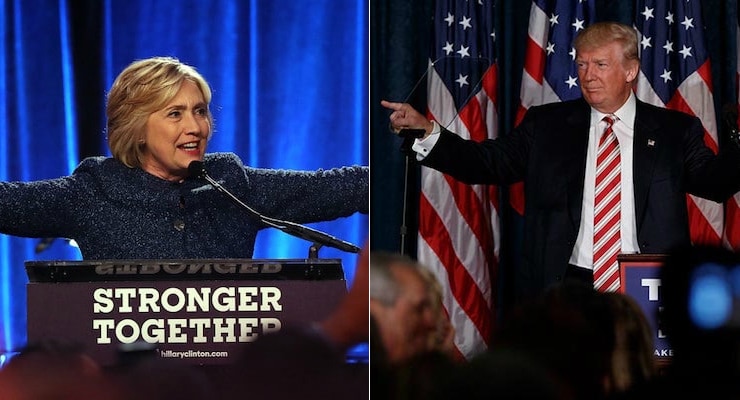 The PPD U.S. Presidential Election Daily Tracking Poll finds likely voters who back Donald Trump are more enthusiastic than those backing Hillary Clinton, helping to fuel his 2-point lead. Mr. Trump has led Mrs. Clinton in PPD polling post-Labor Day during all but one day this week. This is largely the result of an increased reluctance among his supporters to change their minds, compared both to last week and to voters who support Mrs. Clinton and third-party candidates.

Mr. Trump, the Republican presidential candidate, now leads his Democratic rival Mrs. Clinton 44.5% to 42.2%. Libertarian Party candidate and former Gov. Gary Johnson is now polling at just 6.5%, down from a high of 10.6% at the end of August. Green Party candidate Dr. Jill Stein has also fallen from the previous week to 2.8%, down from 3.3%. Among Trump voters, 88% now say they “strongly support” him for president and “won’t change my mind,” compared to just 78% who say the same for Mrs. Clinton. Nearly 7 in 10 (69%) say the same about Gov. Johnson and 6 in 10 (61%) say the same about Dr. Jill Stein, which could present an opportunity for Mrs. Clinton.

However, turnout in a close election will likely decide the winner of the race and, even though Mrs. Clinton definitely has the larger GOTV operation, her supporters are markedly less enthusiastic than Trump voters. A whopping two-thirds (66%) say they are “Extremely Enthusiastic” about voting for Mr. Trump in November, while less than half (45%) say the same about voting for Mrs. Clinton. Another roughly one-fifth (22%) of Trump voters say they are “Very Enthusiastic” juxtaposed to 28% for Mrs. Clinton.

Speaking of turnout, there are clearly two groups of pollsters emerging in the 2016 U.S. presidential election cycle. The first group appears not to believe the “new” voters polled who say they are coming out to vote for Mr. Trump in November, while the other group (we fall into) believe them. These voters, who either say they’ve never voted before or haven’t in the last ten years, are among the most enthusiastic voters in the sample. Thus, we are simply reporting what they are telling us and the other group–to include those (i.e. Chuck Todd) slamming a recent CNN/ORC Poll–are making assumptions that are very likely to be proven false.

The bright spot for Mrs. Clinton, which should be of great concern to Mr. Trump and his supporters, is that voters still expect her to win the presidential race, 54% to 41%. That margin has tightened significantly since the prior week when it was 61% to 29%, but still remains wide. The “expectations” question historically tracks with the election outcome.

Meanwhile, Republicans now hold a slight 2-point lead (48% to 46%) on the 2016 Generic Congressional Ballot, a change of 5 points from last week when the Democrats held a 3-point lead. Support for the Republican candidate ticked up slightly from 46% to 48%, while Democrats fell from 49% to 46%.

The above survey results are taken from the responses of 1402 likely voters interviewed via Internet panel from September 8 to September 10, 2016. The topline results represent the 3-day rolling average. Learn more about how we conduct interviews for the People’s Pundit Daily U.S. Presidential Election Daily Tracking Poll and survey methodology here.