US President Donald Trump hosts a meeting with business leaders in the Roosevelt Room of the White House in Washington on Monday January 23, 2017. (Photo: Reuters)

The U.S. Economic Confidence Index conducted by Gallup is the highest ever measured the week after the inauguration of President Donald J. Trump. The index reached +13 for the week ending Jan. 22, the highest ever in Gallup tracking and the weekly average is higher than it has been since the Great Recession. 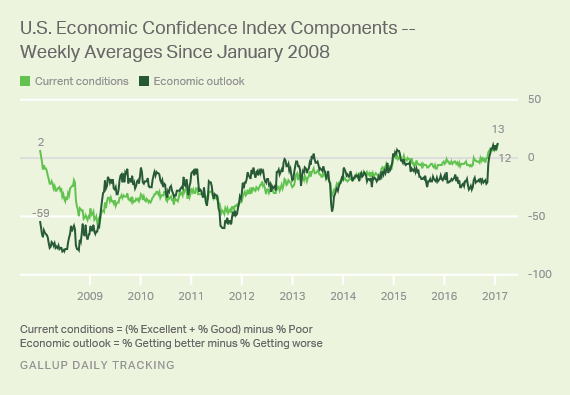 Thirty-three (33%) percent of Americans rated the economy as “excellent” or “good,” and 21% rated it as “poor.” The economic outlook score was +13, based on 53% of Americans saying economic conditions in the country were “getting better,” and 40% saying they were “getting worse.”

Results for this Gallup poll are based on telephone interviews conducted Jan. 16-22, 2017, on the Gallup U.S. Daily survey, with a random sample of 3,044 adults, aged 18 and older, living in all 50 U.S. states and the District of Columbia. For results based on the total sample of national adults, the margin of sampling error is ±2 percentage points at the 95% confidence level. All reported margins of sampling error include computed design effects for weighting.