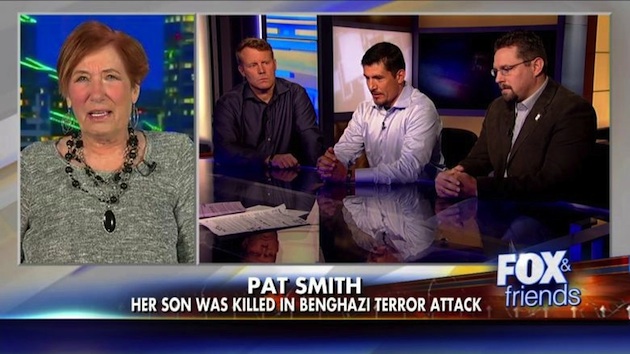 In an emotional interview on Fox and Friends Thursday morning, the mother of one of the Benghazi attack victims spoke to three American security operatives who tried to save her son’s life for the first time.

Pat Smith questioned who gave the stand down order to the CIA operative only identified as “Bob.”

“Who’s the stupid idiot that we have in our government that would order something like that?!” she asked, questioning the role the White House and then-Secetary of State Hillary Clinton played in that giving the order that resulted in the death of her son.

Smith said she wanted to travel to meet the three men in person, and hopes to do that soon.

“I want to do things for you. I don’t want to vent to you. You guys are wonderful. You’re the son that I don’t have anymore. … I want to give you all a big kiss and a hug,” she said.

Kris Paronto, dubbed “Tanto” by his brothers-in-arms, said that they all want to sit down with her in private to answer all of her questions.

“Please know that … your son said prayers when we found him and we did say our prayers over him,” said Paronto

Smith tearfully thanked the men, saying she has a “million questions” to ask.

Pat Smith has been a vocal critic of the administration and was pivotal in discovering the length White House officials were willing to go to mislead the American people over the Benghazi attack. On the tarmac where the plane carrying her son’s body had landed, Hillary Clinton vowed to Smith’s mother they “would get the man who made that hateful video.”

Of course, we know now that the video had nothing to do with what was a well-planned, premeditated attack that was meant to mark the 11th anniversary of the September 11, 2001 terror attack on the World Trade Center, the Pentagon among other failed targets.

The committee Chair Rep. Trey Gowdy (R-SC) wrote in an op-ed that month in USA Today that “Benghazi matters because Americans deserve to know the truth from those entrusted to lead and govern.” The investigation is aimed at answering the many questions about what happened before, during and after the terror attack that killed four Americans.

The House voted 232-186 to approve the panel, with 7 Democrats joining the 225 Republicans voting in favor, while 186 Democrats voted against the committee.

9/11 Flashback: A Look Back As It Happened