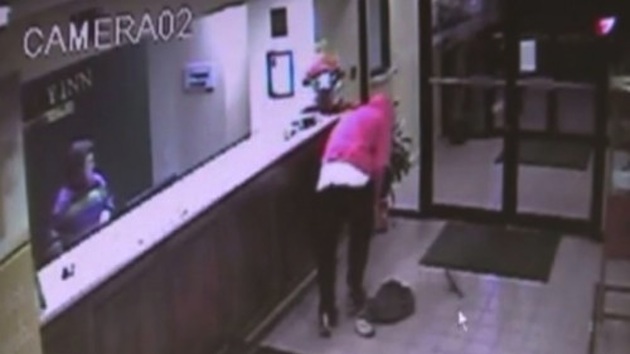 Friday Bradley Parrish, 25, and David Dempsey, 27, robbed a Comfort Inn, a Holiday Inn, and tried to rob a Checkers in North Augusta, South Carolina, before hitting a Quality Inn in Aiken. However, shortly after Dempsey is seen on surveillance video entering the hotel lobby about 10:30 p.m., the robbery suspect shoots himself in the leg.

“All of a sudden he goes, ‘Give me all your money,’ so I started pulling out bills and everything,” Pat Coats told WRDW-TV. “I didn’t want to get shot.”

But as Demspey was making his way to the door with some $300.00 in cash, something happened.

“On the way out I hear a pop, and the gun had gone off,” Coats told WRDW. “He screams then starts limping.”

Police told the Associated Press that they were at the hotel within minutes of the incident. Dempsey actually stopped a deputy and asked for help for his gunshot, who quickly discerned he and Parrish were the hotel robbers. With the pair were Autumn Cooper, 19, and Breanna Dudley, 21. All four were arrested and taken to the Aiken County jail.

“Fortunately they didn’t get away with it and we’ll just have to see how much time they spend in jail,” Coats added to WRDW.