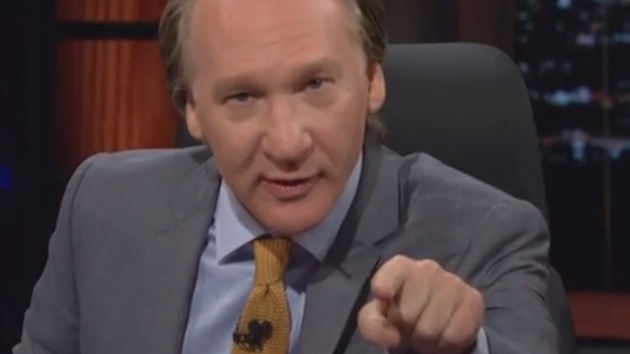 In the “New Rule” segment of Friday’s broadcast of HBO’s Real Time, host Bill Maher ripped the out-of-control political correctness coming from the Left. Maher specifically named two examples, including the ridiculous outrage that followed from the Left after one half of the fashion duo Dolce & Gabbana made a comment that babies created via in vitro fertilization (IVF) are “chemistry children and synthetic children.”

“Don’t through the synthetic baby out with the bathwater,” Maher said, by attacking “people who are 95% on your side.”

Maher also called out the left-leaning media watchdog Media Matters for America for complaining about a recent cover of the magazine The Economist which used jalapeños to make up the red and white in the American flag for a story about Latinos in America.

“For example, The Economist last week drew the wrath of the liberal website Media Matters who said that their jalapeño flag cover was “the sort of stereotype that ignores Latinos as a multi-faceted community and relegates them to chili-pepper-consuming constituency,” Maher explained.

“Hey, Media Matters, can I say one thing to you?” Maher asked. “Shut the fuck up.”

BILL MAHER: Don’t through the synthetic baby out with the bathwater. Last week you may have seen that the iconic designers Dolce & Gabbana caused a raucous when they said that even though they are proudly gay, but when it comes to how you make bambino, they’re old school Italians who don’t approve of what they said is “synthetic children,” because you know synthetic, they just don’t breath like cotton…

Yes, we joke about everybody here and that’s something that a lot of liberals have forgotten about how to do. For folks who take such pride in their love of diversity liberals seem to tolerate none in their own ranks. I don’t necessarily agree with Dolce & Gabbana, but what is the point of attacking people who are 95% on your side? Give them a break. They’re from Sicily — the same place Justice Scalia comes from and if you want to protest someone who doesn’t support gays, start with him.

But no, it’s easier to get all faked outrage over the hateful anti-gay speech from two men who bedazzle codpieces for a living. Ellen, Martina [Navratilova], they were all furious. Courtney Love said she planned to burn her Dolce & Gabbana, and then breath in the melting polyester because, hey, you never know might get you high.

But Dame Elton John was the angriest of all, tweeting, ‘How dare you refer to my children as synthetic? My hair yes, but my children.’ He recorded a protest song called “I Won’t Let My Son Go Down On You.” And called for a boycott. Really? You can’t sell handbags now if you only agree with Elton John almost all the time. In Syria ISIS is throwing gay people off buildings. Maybe there are bigger battles to fight?

We liberals always talk about how the right needs to rein in its crazies but the left has some crazy reining in to do too. Unless you think I am creating a false equivalency, I’m not. Because on the right, unlike the left, they have actually been able to carve out a place for their crazies; unfortunately, that place is elected government.

All the more reason not to drive people into their arms with crazy political correctness. For example, The Economist last week drew the wrath of the liberal website Media Matters who said that their jalapeño flag cover was “the sort of stereotype that ignores Latinos as a multi-faceted community and relegates them to chili-pepper-consuming constituency.” Hey, Media Matters, can I say one thing to you? Shut the fuck up. No Hispanic looked at this cover and said, “I’ve been wronged.” They looked at it and said, “Mmm, yum, jalapeños.”

Asst. Dean At Cornell University Caught On Video Advising How To Start Pro-ISIS Group On Campus