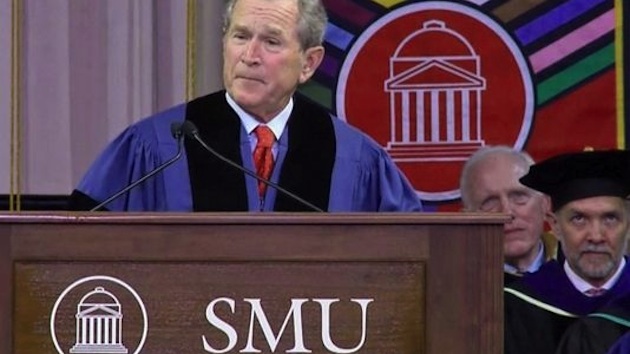 Former President George W. Bush offered a message of optimism and hope during the 100th Spring Commencement address at Southern Methodist University (SMU). After being introduced by SMU President R. Gerald Turner, the former president preceded to use the keynote speech offer 3 reasons younger generations of Americans — in fact, all Americans — should be optimistic and hopeful about the future.

Thank you. Thank you very much. President Turner, thanks. Members of the Board of Trustees, Provost Ludden, faculty, staff, distinguished guests, parents, and—most importantly—the Class of 2015. (Applause.) Thank you for your warm welcome, and I appreciate the invitation to be with you.

You know, when I mentioned this speech to some pals, they were surprised I was going to give it. (Laughter.) I haven’t given a commencement address since leaving office. You know, my decision is quite practical. So I got a call from my landlord – (laughter) – Gerald Turner. (Laughter.) Rather than raising the rent or threatening to withhold our security deposit – (laughter) – I was relieved to hear President Turner ask if I believed in free speech. (Applause.) I said yeah. He said, “Perfect. Here’s your chance to give one.” (Laughter and applause.)

As a proud member of the SMU community, I am honored to be here – truly honored – to deliver the 100th Spring Commencement address. I admire President Turner’s persuasiveness – (laughter) – and leadership. He runs a fantastic university. (Applause.) It is dynamic, diverse, and destined for continued excellence. He has assembled a strong administrative team. He is supported by engaged alumni, and he has an outstanding Board of Trustees.

I’m fortunate to know many of the trustees. (Laughter.) Well, for example I’m good friends with the Chairman, Mike Boone. And there’s one trustee I know really well – (laughter) -a proud graduate of the SMU Class of 1968 who went on to become our nation’s greatest First Lady. (Applause.) Do me a favor and don’t tell Mother. (Laughter.) I know how much the trustees love and care for this great university. I see it firsthand when I attend the Bring-Your-Spouse-Night Dinners. (Laughter.)

I also get to drop by classes on occasion. I am really impressed by the intelligence and energy of the SMU faculty. I want to thank you for your dedication and thank you for sharing your knowledge with your students.

To reach this day, the graduates have had the support of loving families. Some of them love you so much they are watching from overflow sites across campus. (Laughter.) I congratulate the parents who have sacrificed to make this moment possible. It is a glorious day when your child graduates from college — and a really great day for your bank account. (Laughter and applause.) I know the members of the Class of 2015 will join me in thanking you for your love and your support. (Applause.)

Most of all, I congratulate the members of the Class of 2015. You worked hard to reach this milestone. You leave with lifelong friends and fond memories. You will always remember how much you enjoyed the right to buy a required campus meal plan. (Laughter.) You’ll remember your frequent battles with the Park ‘N’ Pony Office. (Laughter.) And you may or may not remember those productive nights at the Barley House. (Laughter and applause.)

You were founding members of the mighty SMU Mob, bouncing like mad and watching in wonder as your then-Student Body President, Señor Lobster – (laughter) – danced with joy after all those Pony victories right here in Moody. (Applause.) And you’ll think back to those carefree fall game days on the Boulevard – though I don’t recall seeing too many of you in the football stadium. (Laughter.)

To those of you who are graduating this afternoon with high honors, awards, and distinctions, I say, “well done.” And as I like to tell the “C” students: You, too, can be President. (Laughter and applause.)

After four years of sitting through lectures, I have a feeling you’re not in the mood for another one. (Laughter.) What I have learned about graduation speeches is that they’re too long and rarely remembered. So I’ll keep this short. I just can’t attest to how memorable it will be.

I’ve also learned that it’s important to refer to someone associated with the University. So I picked one, an SMU trustee (who by the way is not here), Reverend Mark Craig. Now, I asked Mark to deliver the sermon at the First United Methodist Church in Austin before my second inauguration as Governor of Texas. I still remember his Fort Worth twang as he talked about Moses. God called Moses to action, and Moses repeatedly found excuses not to act. “Who am I that I should go to Pharoah, and bring the sons of Israel out of Egypt? Oh, my Lord, I pray, send some other person. I have sheep to tend. And the people won’t believe me — I’m not a very good speaker.”

Moses wasn’t the only one who could mangle his language. (Laughter.) [Inaudible.]

Fortunately, Moses recognized the call to serve something greater than himself. He answered the call, led his people, and history was made.

One, you are graduating from a great university. Your SMU degree will open the door to a wide variety of career options. Millions will never have had this opportunity. SMU has laid a foundation so you can reason, and continue to learn throughout your life. It has given you the tools to be productive citizens.

One of the great strengths of America is our active public square. Issues are influenced by the will of the people. That is why an educated citizenry is so important to the success of our country. As SMU graduates, you are well-equipped to participate in these vital debates. My hope is that you speak out on the issues that matter to you. Participate in your Nation’s civic life as citizens, not spectators. You’ll come to learn that who you are is more important than what you have—and that you have responsibilities to your fellow citizens, your country, and your family. By taking part in American democracy, you will make our country stronger.

Secondly, you are blessed to live in the greatest Nation – ever. (Applause.) Here you can strive and succeed as far as you dare to dream. It says something about our country that millions around the world are willing to leave their homes and families and risk everything to come here and realize the American dream. Their pursuit of that dream invigorates our national soul. It renews our country’s character. And it adds vitality to our culture.

You live in a land that is compassionate and decent. Because we believe in the rights and dignity of our own citizenry, we are committed to defending the rights and dignity of people everywhere. America has liberated millions around the world from tyranny and terror. We’ve helped turn the tide against deadly disease in places like Africa. In our hearts we believe all are created equal under God. The liberty we prize is not America’s gift to the world, it is Almighty God’s gift to humanity.

At home, there are thousands of platoons in the Army of compassion working to honor those beliefs. No matter what your career path, enlist. When you help another, you enrich your heart, and you strengthen the fabric of our collective goodness.

Many of you have already made service a priority in your lives by volunteering during winter, spring, and summer breaks; and completing more than one-hundred community projects through Engaged Learning. I thank you for recognizing the timeless truth: of those to whom much is given, much is required.

As you serve others, you can inspire others. I’ve been inspired by the examples of many selfless servants. Winston Churchill, a leader of courage and resolve, inspired me during my Presidency—and, for that matter, in the post-presidency. Like Churchill, I now paint. (Laughter.) Unlike Churchill, the painting isn’t worth much without the signature. (Laughter.)

In 1941, he gave a speech to the students of his old school during Britain’s most trying times in World War II. It wasn’t too long, and it is well-remembered. Prime Minister Churchill urged, “Never give in … in nothing, great or small, large or petty. Never give in except to convictions of honor and good sense.”

I hope you’ll remember this advice. But there’s a lesser-known passage from that speech that I also want to share with you:

“These are not dark days. These are great days. The greatest our country has ever lived; and we must all thank God that we have been allowed, each of us according to our stations, to play a part in making these days memorable in the history of our race.”

When Churchill uttered these words, many had lost hope in Great Britain’s chance for survival against the Nazis. Many doubted the future of freedom. Today, some doubt America’s future, and they say our best days are behind us. I say, given our strengths—one of which is a bright new generation like you—these are not dark days. These are great days.

And finally, you can be hopeful because there is a loving God. Whether you agree with that statement or not is your choice. It is not your government’s choice. It is essential – (applause). It is essential to this nation’s future that we remember that the freedom to worship who we want, and how we want—or not worship at all—is a core belief of our founding.

I have made my choice. I believe that the Almighty’s grace and unconditional love will sustain you. I believe it will bring you joy amidst the trials of life. It will enable you to better see the beauty around you. It will provide a solid foundation amidst a rapidly changing, somewhat impersonal, technologically-driven world. It will show you how to love your neighbor, forgive more easily, and approach success with humility—and failure without fear.

It will inspire you to honor your parents and eventually be a better spouse and parent yourself. It will help you fully grasp the value of life—all life. It will remind you that money, power, and fame are false idols. And I hope and believe that God’s love will inspire you to serve others.

I want to thank you for letting me share this special day with you. I wish you all the very best. Stay in touch with your friends. Love your family. Treat this day as a step toward a lifetime of learning. And go forth with confidence. May God bless you.