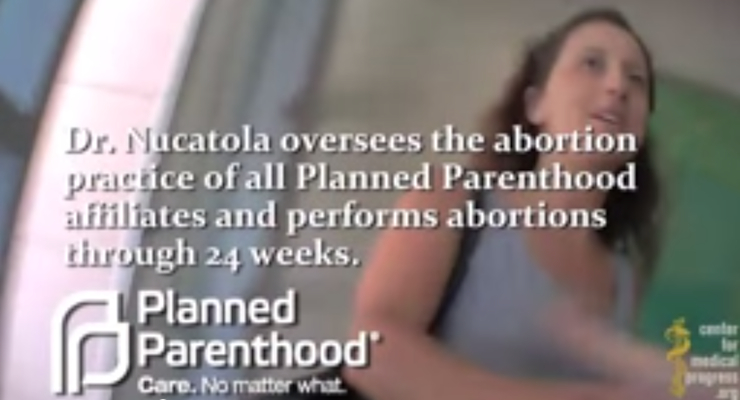 In the video titled, “Planned Parenthood Uses Partial-Birth Abortions to Sell Baby Parts,” which was released by the Center for Medical Progress, a group concerned with medical ethics, Nucatola is at a business lunch with actors posing as buyers from a human biologics company. As head of PPFA’s Medical Services department, Nucatola has overseen medical practice at all Planned Parenthood locations since 2009. She also trains new Planned Parenthood abortion doctors and performs abortions herself at Planned Parenthood Los Angeles up to 24 weeks.

“Planned Parenthood’s criminal conspiracy to make money off of aborted baby parts reaches to the very highest levels of their organization,” said David Daleiden, who oversaw a nearly 3-year-long investigative journalism study of Planned Parenthood’s illegal trafficking of aborted fetal parts. “Elected officials must listen to the public outcry for Planned Parenthood to be held accountable to the law and for our tax dollars to stop underwriting this barbaric abortion business.”

When asked by buyers, “How much of a difference can that actually make, if you know kind of what’s expected, or what we need?” the answer and optics are equally disturbing.

“It makes a huge difference,” Nucatola replies. “I’d say a lot of people want liver. And for that reason, most providers will do this case under ultrasound guidance, so they’ll know where they’re putting their forceps. The kind of rate-limiting step of the procedure is calvarium. Calvarium—the head—is basically the biggest part.”

This is not the first time Planned Parenthood has been excused or caught operating outside of the respected laws. But, in the past, the organization’s leaders have always attempted to paint those caught as rogue. However, not this time, as the video not only stars the senior director of medical services, but the president and CEO. 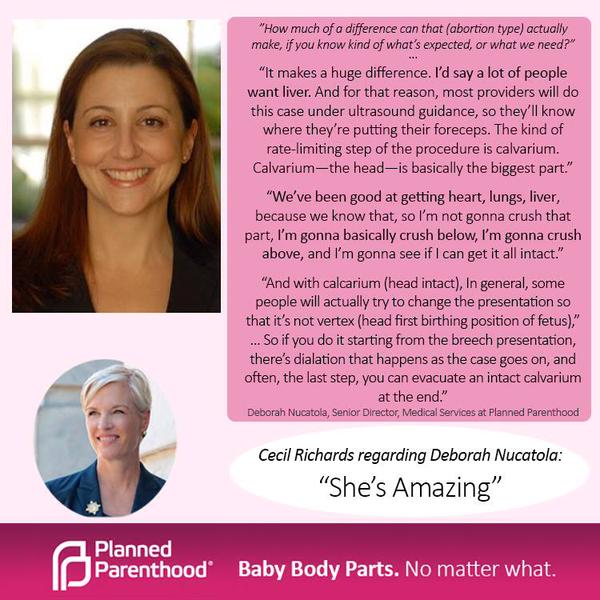 “We’ve been very good at getting heart, lung, liver, because we know that, so I’m not gonna crush that part, I’m gonna basically crush below, I’m gonna crush above, and I’m gonna see if I can get it all intact,” the good doctor adds. “And with the calvarium, in general, some people will actually try to change the presentation so that it’s not vertex,” she continues. “So if you do it starting from the breech presentation, there’s dilation that happens as the case goes on, and often, the last step, you can evacuate an intact calvarium at the end.”

Using ultrasound guidance to manipulate the fetus from vertex to breech orientation before intact extraction is the hallmark of the illegal partial-birth abortion procedure (18 U.S.C. 1531), according to the Center for Medical Progress.

Nucatola also reveals that Planned Parenthood’s national office is concerned about their liability for the sale of fetal parts, but they are speaking with affiliate locations “behind closed doors” until they have a Supreme Court leftwing enough to deem their activities legal and constitutional.

“At the national office, we have a Litigation and Law Department which just really doesn’t want us to be the middle people for this issue right now,” she says. “But I will tell you that behind closed doors these conversations are happening with the affiliates.”

A separate clip at the end of the video stars none of than Planned Parenthood President and CEO Cecile Richards, herself, who praises Nucatola’s work to facilitate connections for fetal tissue collection.