Anderson Cooper to Hillary Clinton: “Will You Say Anything To Get Elected?” 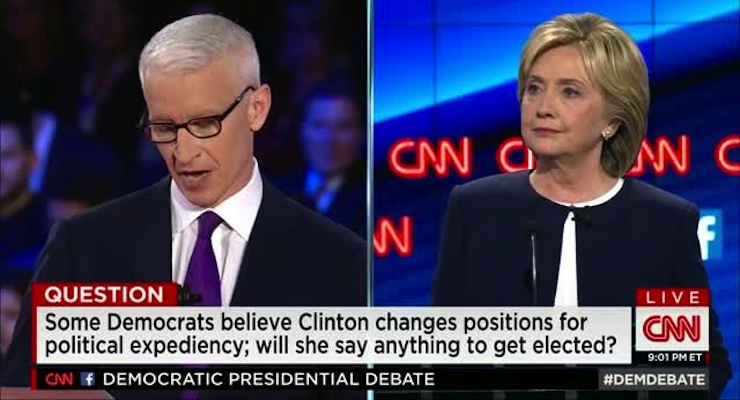 CNN Democratic debate moderator Anderson Cooper pressed Hillary Clinton on whether she “would say anything to get elected,” citing numerous flip flops.

ANDERSON COOPER, CNN: I want to begin with concerns that voters have about each of the candidates here on the stage that they have about each of you. Secretary Clinton, I’ll start with you. Some Democrats believe you changed your positions based on political expediency. You’re against same-sex marriage. You defended President Obama’s immigration policy. You supported his trade deal and called it the gold standard. Suddenly last week you’re against it. Will you say anything to get elected?

HILLARY CLINTON: I have been consistent over the course of my entire life. I have always fought for the same values and principles, but like most human beings, including those of us who run for office, I do absorb new information, I do look at what’s happening in the world.

You know, take the trade deal. I did say when I was Secretary of State three years ago, that I hoped it would be the gold standard. It was just finally negotiated last week. In looking at it, it didn’t meet my standards. My standards for more new good jobs for Americans, for raising wages for Americans and I want to make sure that I can look into the eyes of any middle class American and say this will help raise your wages and I concluded I could not.

COOPER: Secretary Clinton, with all due respect, the question is about political expediency. In July, New Hampshire, you told the crowd you take a back seat to no one when it comes to progressive values. Last month in Ohio you say you pled guilty to being kind of moderate and center. Do you change your political identity based on who you’re talking to?

CLINTON: No. I think like most people that I know, I have a range of views. But they are rooted in my values and my experience. And I don’t take a back seat to anyone when it comes to progressive experience and progressive commitment…

COOPER: Just for the record, are you a progressive or a moderate?

CLINTON: I am a progressive who likes to get things done.

Sanders: "The American People Are Sick and Tired of Hearing About Your Damn Emails"

Fiorina: Trump And Carson Afraid Of Debating, "Sound A Lot Like Politicians"