HomeVideoKatrina Pierson vs. S.E. Cupp on Trump Ban: “So What? They’re Muslim!”

Katrina Pierson vs. S.E. Cupp on Trump Ban: “So What? They’re Muslim!” 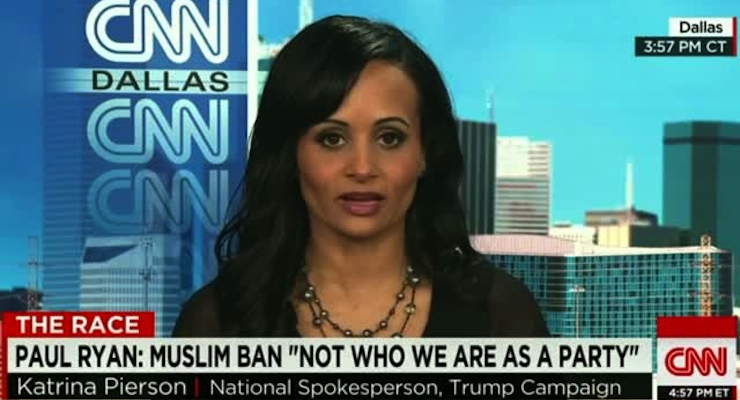 Katrina Pierson, a national spokeswoman for Donald Trump, bluntly responded to conservative pundit S.E. Cupp while defending the controversial proposal to ban Muslims from entering the U.S. on CNN.

Katrina Pierson told S.E. Cupp while defending the Republican frontrunner’s controversial proposal to ban Muslims from immigrating to the U.S. Cupp appeared on CNN Tuesday and slammed Trump’s plan as “un-American” and “Unconstitutional.”

“I don’t see a shred of what Donald Trump is suggesting that is conservative by nature,” Cupp said. “So I’m not really sure what his supporters are turned on here. He can’t deliver on half the promises he’s made, because they will either need Congress to go bananas and go crazy or to change the Constitution.”

Pierson shot back at Cupp, pointing out Trump’s proposal to ban a specific religious group from entering the U.S. was “nothing new” in history, which triggered a smirk from Cupp. Pierson characterized opponents of Trump’s plan as being in favor of allowing “insurgents” to immigrate to the U.S.

“No one is talking about insurgents!” Cupp quipped. “Who wants insurgents to come over?”

“Yes, from Arab nations,” Pierson responded. “You know what? So what? They’re Muslim!”

So what? That’s not the America we live in, Pierson!” she said.