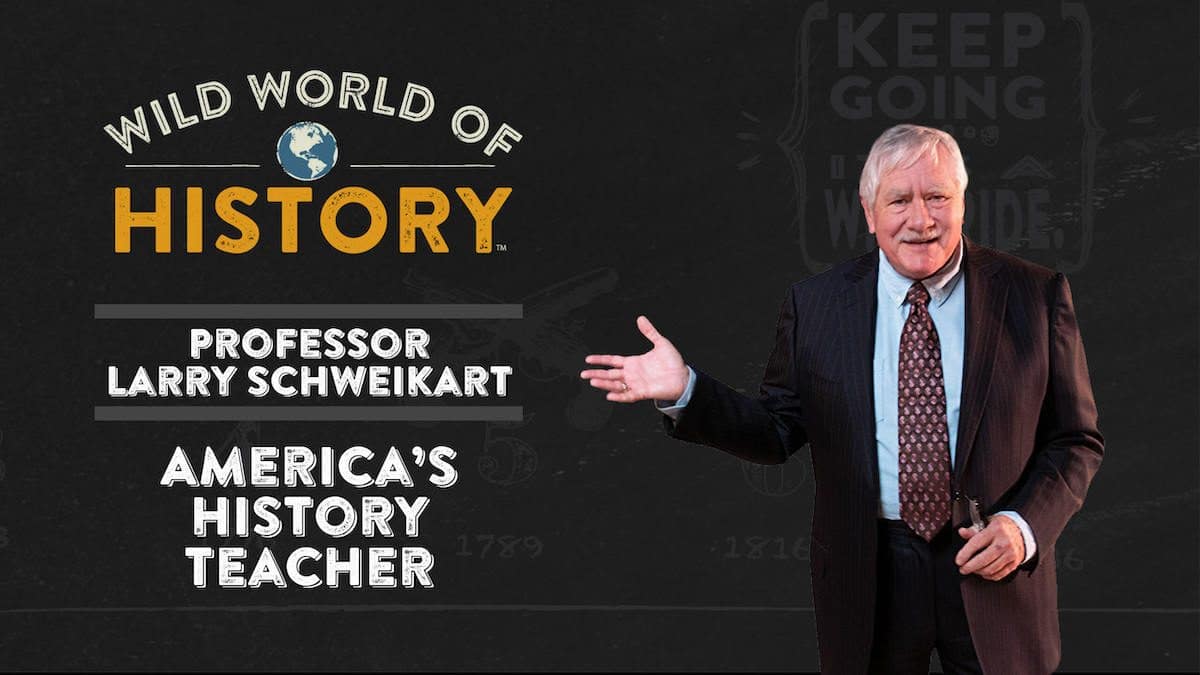 PPD interviewed Schweikart to discuss his work on the man he calls the most important president of the 20th century, and his new website, Wild World of History.

“I’ve been pressured to do a curriculum for many years. But I just didn’t have the digital or marketing support to do it,” Schweikart said. “After I moved to Arizona, I met Scott Mitchell at Luke Logic and Kathy, and we finally had a team. It really came together.”

The website offers subscribers video lessons from his prior work Patriot’s History of the United States in curriculum form. Eventually, all 22 lessons will be available, and a course on President Reagan.

Part 1 covers up to the Civil War and Reconstruction. Part 2 covers the American West to the 45th President of the United States, Donald Trump.

The second is scheduled to be available before August.

In the curriculum, Schweikart identifies the Four Pillars of American Exceptionalism. The first two alone make the United States of America different than any other nation in the history of the world.

“It’s totally lacking in the level of analysis that I provide that I think a lot of homeschoolers want to see,” he said. “There’s no other curriculum out there that promotes ‘America is exceptional because’ of these reasons.”

We asked for a few examples, and he gave us a taste of Part 1 and of what is to come in Part 2. Channeling Reagan, the lessons take a holistic approach to explaining how things were, and why they led to future events.

“You get that kind of deep analysis and yet it’s presented in an accessible manner,” he said.

Who Saved the Buffalo?

Take the chapter on the West. We have a section on the buffalo. The traditional version of history you hear in your grade school class is that the Native Americans lived in harmony with the buffalo until the white man nearly exterminated them.

Three studies came out in the early 2000s, all three of them about the Indians and the buffalo. All agreed given death rates the Indians were already hunting the buffalo to extinction. They didn’t use all the buffalo at one time. Blood for paint, bones for teepees. In fact, they’d kill an entire herd and only take the part they needed at the time. The way we know this is that there were countless missionaries, scouts, settlers would come up on fields of rotting buffalo. All found the Indians were hunting them to extinctions. When the whites showed up, they did accelerate it but often used all parts of the buffalo.

White philanthropists like JP Morgan are who saved the buffalo. Charles Goodnight captured calves and began raising them before donating to Wood Buffalo National Park, and the population grew. By 1900, there was more buffalo on private reserves being raised for meat than in government preserves.

Starting in 1961, a record number of baby boomers were entering colleges and met with a flood of federal money from Sputnik to fund science and math. But money in universities doesn’t stay where it’s put, which resulted in Liberal Arts funding. Leftwing (Marxist) professors were brought in as a backlash against McCarthyism in the late 1950s. All met the wave of money and students.

The counter-culture was occurring all throughout the world. Racial tensions were bubbling over completely unrelated as a side, unique to America. In the 1950s, paramount concerns were race relations, the atomic bomb, and a migration like never seen before. Americans saw society unraveling.

Yet the 1950s are portrayed as a period of stability.

In Reagan: The American President, Schweikart takes a new direction juxtaposed to previous biographers, developing the argument that Ronald Reagan was a holistic thinker.

“As inflation came down, it undercut gold sales for the Soviet Union,” he told PPD. “Look how it played out. What was keeping South African afloat? Gold sales. Western inflation from liberal governments propped them, postponed their decline.”

In the book, he also cites the 1981 sale of AWACS aircraft to Saudi Arabia, which historians have previously portrayed as the result of a balanced approach in the Middle East.

Schweikart argues the quid pro quo for the Saudis to cut prices and increase oil production was just one in a series of policy objectives that included “lowering prices for Americans thereby increasing economic productivity; reducing inflation and thereby strengthening American family purchasing power; and driving down the price of Russian oil, which in turn meant depriving the USSR of a major source of hard currency at the most critical time.”

“Other than perhaps Calvin Coolidge and Franklin D. Roosevelt, no other American president in the twentieth century had such scope to his thinking.”