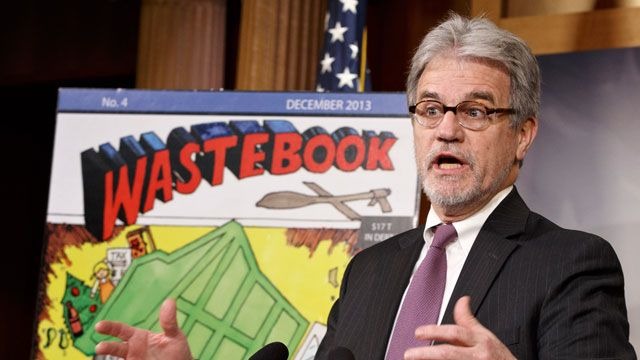 Senator Tom Coburn, a champion in the battle against government waste, fraud and abuse in Washington, announced Thursday he would be stepping down at the end of 2014.

The Oklahoma senator previously announced he would not seek reelection, however, his new comments reveal that he will be leaving Congress a full 2 years earlier than planned.

It is well-known Coburn has been battling a recurrent case of prostate cancer, and was suggesting early retirement during an interview with reporters last week.

“Serving as Oklahoma’s senator has been, and continues to be, one of the great privileges and blessings of my life,” said Coburn, who is now 65. “But after much prayer and consideration, I have decided that I will leave my Senate seat at the end of this Congress.”

Senator Tom Coburn rode in to Washington on the 1994 “Republican Revolution” wave, where he served in the House, as he previously promised he would, for just 3 terms. In other words, Colburn term-limited himself and actually stuck to it, unlike many others who have reneged on their campaign promises over the years.

Coburn didn’t return to politics until he was elected to the Senate in 2004. Since then, he has been a fierce critic of what he described as excessive government spending, and was a pioneer in opposing the earmarking of special projects, known as pork, which was brought to the public’s attention every year in his annual “Wastebook” report.

Coburn, who is a licensed physician specializing in family medicine, obstetrics and allergy treatment, has long been battling prostate cancer. In the past, he also suffered from colon cancer and melanoma. However, he said he was retiring to honor his pledge to serve no more than 2 terms in the Senate, even though he will be stepping down two years before his term expires.

Indeed, there have been few to no lawmakers who have courageously and repeatedly proposed a quarter-trillion dollars in cuts, a result of his tedious combing through of GAO reports outlining fraud, waste and abuse.

“As a citizen, I am now convinced that I can best serve my own children and grandchildren by shifting my focus elsewhere,” Coburn said in his announcement. “In the meantime, I look forward to finishing this year strong. I intend to continue our fight for Oklahoma, and will do everything in my power to force the Senate to re-embrace its heritage of debate, deliberation and consensus as we face our many challenges ahead.”

Senate Republican Leader Mitch McConnell reacted to the news by describing Coburn as “one of the most intelligent, principled, and decent men in modern Senate history” in a statement.

“Tom is a legend in his own time, an extraordinary man and a deeply serious lawmaker who has made an immense difference to his country and to this body. We will miss him terribly when he leaves the Senate, and we will stand with him every step of the way as he wages this latest of many tough battles that he has fought, and won,” the statement read.