HomeNewsLeahey Says Senate NSA Reforms Needed: ‘We Have Gone Too Much Into Americans’ Privacy’

Leahey Says Senate NSA Reforms Needed: ‘We Have Gone Too Much Into Americans’ Privacy’ 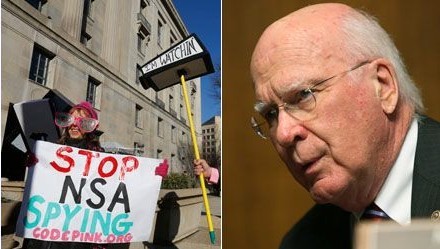 Democratic Senator Patrick Leahy, chairman of the Senate Judiciary Committee, said the Senate will craft their own NSA reforms via legislation to limit NSA spying, echoing many on the left as well as the right who believe President Obama proposed nothing last week to protect Americans’ privacy.

“There’s a concern that we have gone too much into Americans’ privacy,” the Vermont Senator told “Fox News Sunday,” adding “there’s still going to be legislation on this.”

Leahy repeatedly said both Democrats and Republicans are concerned and suggested the direction of the legislation will be impacted by what Attorney General Eric Holder says when he testifies on Capitol Hill on Jan. 29, which is the day after the president’s fifth State of the Union address.

Obama announced minor proposals Friday in a major speech at the Justice Department, which avoided providing any answer for the biggest, most controversial questions surrounding the bulk data collection program.

The president appointed Attorney General Eric H. Holder and the National Intelligence Director James R. Clapper, both of whom lied under oath in Congress, to develop a plan to move phone meta-data from the NSA only to a consortium of independent entities.

Senator Leahy said he wouldn’t oppose the White House on the president’s proposed NSA reforms, but he stressed the inadequacy of the proposal and assured the Senate will act independently.

“I think we have a way we can do this,” he said. “I believe in going after the bad guys. But I also believe in some checks and balances, so you don’t have a government run amok.”

“Reformers may not get all of what we want,” said Democratic Senator Richard Blumenthal of Connecticut, who commented separate from the Sunday Show. “But I think there’s a very real prospect of doing better than the president has proposed, and he’s acknowledged himself that there may be a need for taking additional steps.”

However, Senator Rand Paul, who is suing the Obama administration over the massive meta-data collection, isn’t buying what Democrats are selling.

“This happens all the time in Washington,” said the Republican Senator from Kentucky. “Everybody gets in an uproar — ‘Congress must act! Congress must act!’ But when they do act, they do something devious and don’t really address the problem.”

Paul appears to have reason to be pessimistic, and it comes in the form of the man who joined Leahy on the Sunday show, retired Gen. Michael Hayden, a former Bush administration NSA and CIA director. Though Obama vastly expanded the NSA spying programs, a large amount were actually started in 2006 under the Bush administration.

“There was an awful lot I liked about the [Obama] speech,” Hayden said.

He expresses some concern, the ever-present Washington “but” that follows an answer to an uncomfortable question, particularly regarding the NSA reforms that allow the NSA to only follow the second call from an original call, or “hop” as they are called, and not the third call.

“If the third hop hadn’t been useful, we wouldn’t have been using it,” Hayden said.