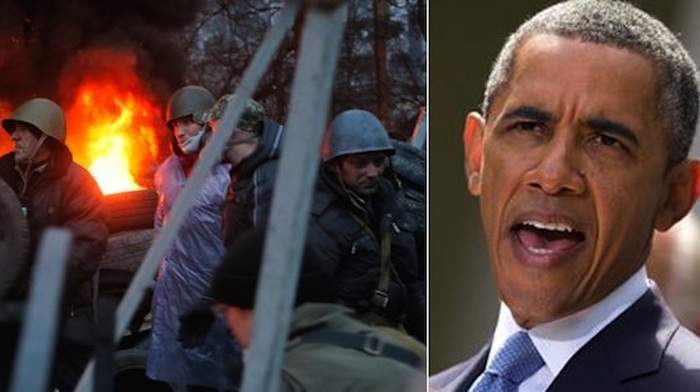 The administration said the International Monetary Fund is working on an assistance package, but Carney said the U.S. will give Ukraine foreign aid to “strengthen its social safety net.”

Just when it appears President Obama has finally begun to understand how the world works and, more importantly, how Russian President Vladimir Putin works, there is a catch. White House Press Secretary Jay Carney said Monday that the U.S. government will provide Ukraine foreign aid, with certain conditions, though Carney curiously said it is to “strengthen its social safety net.”

Carney’s comments came after Ukraine’s acting government issued an arrest warrant for former Ukrainian President Viktor Yanukovych, accusing him of mass crimes against anti-government protesters who began dissent after Yanukovych rejected a landmark trade deal with the EU in favor of closer ties with Russia. Carney Yanukovych’s whereabouts have not been confirmed, however, he is not “actively leading the country.”

Carney said the Obama administration believes the Ukrainian parliament has lawfully elected a new speaker. The parliament’s speaker, Oleksandr Turchinov, has been acting as the government’s interim leader following the storming of the presidential palace by protestors that forced the Russian-backed Yanukovich to flee the capital of Kiev for Kharkiv.

The administration said the International Monetary Fund is working on an assistance package for Ukraine. However, Carney said that the U.S. and other countries are willing to give additional support as the country “takes the reforms it needs.”

Ukraine is facing serious financial challenges, and the recent developments have squashed previous arraignments with Russia to fulfill and meet financial deadlines. Russia’s prime minister said the legitimacy of the new Ukrainian authorities is questionable.

Dmitry Medvedev said Monday, according to Russian news agencies, that the new authorities have come to power as a result of “armed mutiny,” so their legitimacy is causing “big doubts.” The loss of the Ukraine, which was a satellite state of Russia and the former Soviet Union, would be a tremendous loss for Putin. Yet it is unclear whether or not the Obama administration understands an opportunity is presenting itself, or if the importance of social safety nets in a country that never had one to begin with takes precedent over national security and balance of power politics.

Treasury Secretary Jacob Lew spoke Monday with IMF Managing Director Christine Lagarde. Lew said he told Ukrainian opposition leader Arseniy Yatsenyuk that there is, in fact, “broad support” for an international assistance package once a transitional government is in place.

Curiously, for the first time, according to the Gallup annual World Affairs poll, a majority of Americans think President Obama is not respected by other world leaders. It represented a dramatic shift fueled by a year of foreign policy blunder, with many Democrats and a wide margin of independents shifting their views. It remains to be seen how Ukraine may affect those views in the future.

Opposition Awaits Justice For Viktor Yanukovych, But Russia Has 'Big Doubts' Over Their Legitimacy