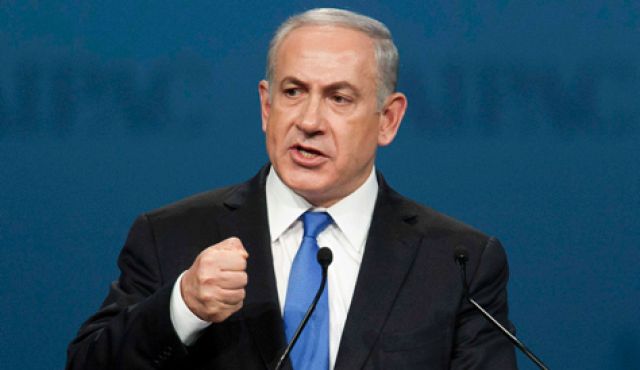 In a speech at the pro-Israel American Israel Public Affairs Committee’s annual policy conference, Israeli Prime Minister Benjamin Netanyahu called on Palestinian President Mahmoud Abbas to do something that Israel requires to move forward in talks. “Recognize the Jewish state. No excuses, no delays, it’s time.”

The Israeli Prime Minister also denounced the anti-Semitic, Palestinian-led boycott, divestment and sanctions —knows by its acronym, BDS. The movement has been gaining momentum recently, particularly in Europe, where some businesses and pension funds have cut investments or trade with Israeli firms they say are connected to West Bank settlements.

“Those who wear the BDS label should be treated exactly as we treat any anti-Semite or bigot,” Netanyahu said. “They should be exposed and condemned. The boycotters should be boycotted.”

He also said Iran has not been living up to their end of the deal pertaining to nuclear development, and that the West is being fooled.

Iran “wheels out its smiling president and its smooth-talking foreign minister. But if you listen to their words, their soothing words, they don’t square with Iran’s aggressive actions,” Netanyahu said.

“Why doesn’t it divulge the secrets of its military nuclear activities? … Iran says it’s not building nuclear weapons. So why does it continue to build ICBMs, intercontinental ballistic missiles, whose only purpose is to carry nuclear warheads?”

Returning his attention to Palestinian, Netanyahu said that by recognizing a Jewish state, Abbas would be telling his people that — although there is a territorial dispute — the right of the Jewish people to have a state of their own is no longer in dispute.

The Palestinian response underscored the still-stalemate that is the reality of the Israeli-Palestinian conflict.

Reacting to Netanyahu’s visit to the U.S., Palestinian official Hanan Ashrawi told The Associated Press that the Israeli leader went to Washington “ready to allocate blame without, in any way, showing any sign of willingness to do the right thing — to stop settlement activities, accept ’67 borders, accept signed agreements, end illegal actions and move ahead. Instead, he is reiterating his ideological condition of recognition of a Jewish state.”

Palestinians argue that embracing Israel as a Jewish state would, essentially, abandon the so-called “right of return,” which is a central sticking point in peace talks, and a position that time and again has halted progress on the talks. They also claim it would undercut the rights of Israel’s own Arab minority, which is the 20 percent of Israel’s 8 million people who are themselves ethnic Palestinians.

The Palestinians want to occupy and control the West Bank, east Jerusalem and the Gaza Strip, which were all territories captured by Israel in 1967 when they faced Arab aggression. Israel had already won an independent state before an Arab coalition decided to try their hand at an attack that Israel not only repelled, but subsequently crushed.

Yet, they still demand Israel agree to accept the final borders with a future Palestinian state on the pre-1967 lines, including small land swaps that would allow Israel to keep some of the Jewish settlements it has built in the West Bank and east Jerusalem since the 1967 conflict.

New Israeli housing statistics showed that Israel began building more than twice as many West Bank settlement homes in 2013 than it did the previous year. The Palestinians consider settlements built on territories captured by Israel in 1967 to be illegal and a deal-breaker.

ObamaCare News To Be Front-Loaded Before Midterm Elections, May Delay Past 2016 For Hillary