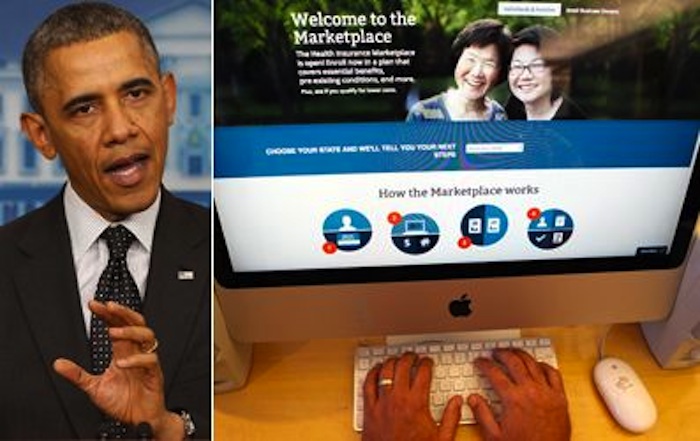 The administration will again delay a key element to Obama’s signature law, granting an ObamaCare deadline extension for those who “attempted” to enroll in the federal insurance marketplace. The president’s move is the latest unilateral action and desperate attempt to avoid responsibility for missing his administration’s set goals by his self-imposed deadline.

If consumers, which is what we call Americans who are forced to purchase a product these days, have begun the process of purchasing coverage on the ObamaCare website, but did not complete the registration by Monday, they will now have until mod-April to ask for an extension to do so.

Astonishingly, government website designers will create a button on the site for users to check, which will register them as a user who tried to enroll by the deadline, but the government says they will not verify whether or not they actually did attempt to enroll.

Though the original excuse for the program’s lack of performance was tied to glitch-prone tech problems, which actually turned out to be core architectural flaws in the website’s code, leading security experts to warn Americans of a real risk to identity theft for users, the fundamental problem is far more serious.

As previously reported by PeoplesPunditDaily.com, uninsured Americans simply are not signing up for insurance, though the argument for the law included a sense of desperation by those without. Yet, according to a survey by the consulting firm McKinsey & Co., which has been corroborated by data from Gallup and the Urban Institute, only 1 in 10 uninsured Americans who qualify for private plans through the new health insurance marketplaces actually enrolled as of last month.

Further, according to insurers, of those who have selected a plan either through the FFM or SBM online Marketplaces, roughly 20 percent have never paid the first month’s premiums and an additional 2 to 5 percent haven’t paid the second month’s premium. Now, health insurers “participating in ObamaCare are a very worried group right now,” according to health insurance industry consultant Robert Laszewski.

What is the cause for such underperformance? Cost. According to McKinsey & Co., Gallup, the Manhattan Institute and the Urban Institute, the number one reason uninsured Americans — and those who have had their policies cancelled due to ObamaCare’s Essential Health Benefit Standards — are not signing up for coverage, is cost.

Meanwhile, the administration is also trying to provide political and logistical cover for state exchanges who were equally inept in the rollout of ObamaCare. Overseers in Nevada Health Link, for instance, have characterized the state’s program as a “full failure” and a “catastrophe.”

Nevada Governor Brian Sandoval, a Republican who both accepted federal funds that will soon run out and opted to set up an exchange, now finds himself in a predictable sinking ship with President Obama.

“We can’t go through this again,” Sandoval said of the proposal to fire Xerox, the company awarded a $75 million contract to develop the system.

“We’re not going to wake up every morning seeing stories of Nevadans who can’t navigate through the system; that aren’t getting insurance cards; the gentleman who had a heart attack who is still sitting in limbo not knowing what his status is.”

Still, though boasting 5 million enrollments as of March, the administration refuses to release data on the risk pool, or whether or not they have an adequate amount of healthy, younger Americans to cover the cost of free insurance and coverage for the more expensive, sicker Americans. If they had positive information, which they claim they do not track, then they would have released it.

Earlier in March, Richard D. Baris, creator and editor of PeoplesPunditDaily.com, predicted people would begin to ask the question: What was the point of ObamaCare, again? As it stands now, the law has not achieved its stated goal to insure at least 30 million of the 45 million uninsured Americans, a figure which was false to begin with, and we have nothing to show for it but an out-of-control, lawless president who changes laws whenever he sees it political expedient.