HomeNewsEconomyThe Outcome Of The Fiscal Fight In Greece, And Implications For Eurozone

The Outcome Of The Fiscal Fight In Greece, And Implications For Eurozone 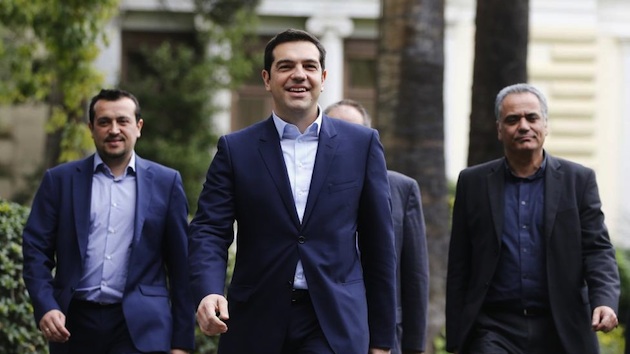 There’s a big fiscal battle happening in Europe. The relatively new Greek government is demanding continued handouts from the rest of Europe, but it wants to renege on at least some of the country’s prior commitments to improve economic performance by reducing the preposterous burden of

That seems like a rather strange negotiating position. Sort of like a bank robber holding a gun to his own head and saying he’ll shoot himself if the teller doesn’t hand over money.

At first glance, it seems the Greeks are bluffing. Or being suicidally self-destructive.

And maybe they are posturing and/or being deluded, but there are two reasons why the Greeks are not totally insane.

1. The rest of Europe does not want a Greek default.

that applies to the Greek fiscal fight. Simply stated, there are lots of people and institutions that own Greek government bonds and they are afraid that their investments will lose value if Greece decides to fully or partially renege on its debts (which is an implicit part of Greece’s negotiating position).

So while Greece would suffer if it defaulted, there would be collateral damage for the rest of Europe. In other words, the hypothetical bank robber has a grenade rather than a gun. And while the robber won’t fare well if he pulls the pin, lots of other people may get injured by shrapnel.

And to make matters more interesting, previous bailouts of Greece have created a rather novel situation in that taxpayers are now the indirect owners of a lot of Greek government debt. As you can see from the pie chart, European taxpayers have the most exposure, but American taxpayers also are on the hook because the IMF has participated in the bailouts.

The situation is Greece is akin to a bankruptcy negotiation. The folks holding Greek government debt are trying to figure out the best strategy for minimizing their losses, much as the creditors of a faltering business will calculate the best way of extracting their funds. If they press too hard, the business may go bust and they get very little (analogous to a Greek default). But if they are too gentle, they miss out on a chance of getting a greater share of the money they’re owed.

2. Centralization is the secular religion of the European elite and they want Greece in the euro.

The bureaucrats at the European Commission and the leaders of many European nations are emotionally and ideologically invested in the notion of “ever closer union” for Europe. Their ultimate goal is for the European Union to be a single nation, like the United States. In this analogy, the euro currency is akin to the American dollar.

There’s a general perception that a default would force the Greek government to pull out of the euro and re-create its own currency. And for the European elite who are committed to “ever closer union,” this would be perceived as a major setback. As such, they are willing to bend over backwards to accommodate Greece’s new government.

Given the somewhat blurry battle lines between Greece and its creditors, what’s the best outcome for advocates of limited government and individual liberty?

That’s a frustrating question to answer, particularly since the right approach would have been to reject any bailouts back when the crisis first started.

And it would have been better if Greece defaulted five years ago, back when its debt was much smaller than it is today.

But there’s no point in crying about spilt milk. We can’t erase the mistakes of the past, so what’s the best approach today?

To follow up on the wisdom of J. Paul Getty, let’s now share a statement commonly attributed to either Will Rogers or Warren Buffett. I don’t know which one (if either) deserves credit, but there’s a lot of wisdom in the advice

to stop digging if you find yourself in a hole. And Greece, like many other nations, has spent its way into a deep fiscal hole.

There is a solution for the Greek mess. Politicians need to cut spending over a sustained period of time while also liberalizing the economy to create growth. And, to be fair, some of that has been happening over the past five years. But the pace has been too slow, particularly for pro-growth reforms.

But this also explains why bailouts are so misguided. Politicians generally don’t do the right thing until and unless they’ve exhausted all other options. So if the Greek government thinks it has additional access to money from other nations, that will give the politicians an excuse to postpone and/or weaken necessary reforms.

2. Saying “No” to Greece will send a powerful message to other failing European welfare states.

Now let’s get to the real issue. What happens to Greece will have a big impact on the behavior of other European governments that also are drifting toward bankruptcy.

Here’s a chart showing the European nations with debt burdens in excess of 100 percent of economic output based on OECD data. Because of bad demographics and poor decisions by their politicians, every one of these nations is likely to endure a Greek-style fiscal crisis in the near future. 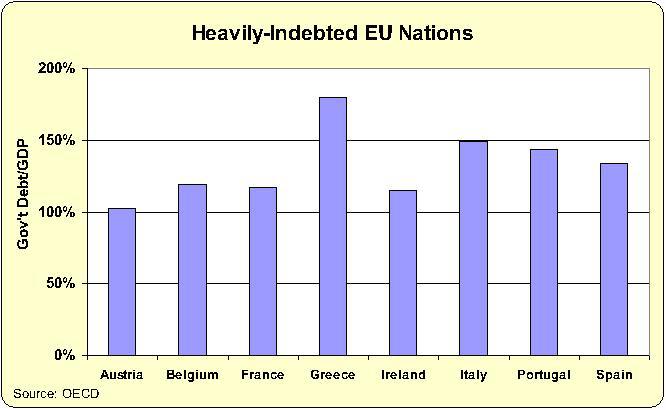 And keep in mind that these figures understate the magnitude of the problem. If you include unfunded liabilities, the debt levels are far higher.

So the obvious concern is how do you convince the politicians and voters in these nations that they better reform to avoid future fiscal chaos? How do you help them understand, as Mark Steyn sagely observed way back in 2010, that “The 20th-century Bismarckian welfare state has run out of people to stick it to.“

Well, if you give additional bailouts to Greece, you send precisely the wrong message to the Italians, French, etc. In effect, you’re telling them that there’s a new group of taxpayers from other nations who will pick up the tab.

That means more debt, bigger government, and a deeper crisis when the house of cards collapses.

P.S. Five years ago, I created a somewhat-tongue-in-cheek 10-step prediction for the Greek crisis and stated at the time that we were at Step 5. Well, it appears my satire is slowly becoming reality. We’re now at Step 7.

P.P.S. Four years ago, I put together a bunch of predictions about Greece. You can judge for yourself, but I think I was quite accurate.

P.P.P.S. A big problem in Greece is the erosion of social capital, as personified byOlga the Moocher. At some point, as I bluntly warned in an interview, the Greeks need to learn there’s no Santa Claus.

P.P.P.P.S. The regulatory burden in Greece is a nightmare, but some examples of red tape are almost beyond belief.

P.P.P.P.P.S. The fiscal burden in Greece is a nightmare, but some examples pf wasteful spending are almost beyond belief.

P.P.P.P.P.P.S. Since we once again have examined a very depressing topic, let’s continue with our tradition of ending with a bit of humor. Click here and here for some very funny (or sad) cartoons about Obama and Greece. And here’s another cartoon about Greece that’s worth sharing. If you like funny videos, click here andhere. Last but not least, here’s some very un-PC humor about Greece and the rest of Europe.