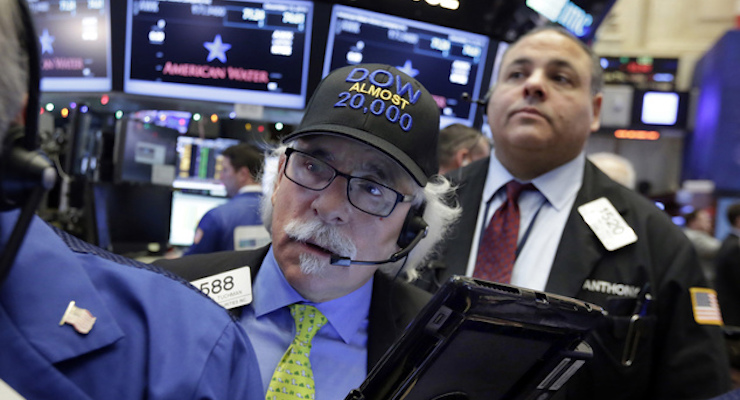 Trader Peter Tuchman wears his “Dow Almost 20,000” cap as he works on the floor of the New York Stock Exchange, Thursday, Dec. 15, 2016. Stocks are opening moderately higher on Wall Street and the dollar is making more gains against other currencies a day after the Federal Reserve raised its benchmark interest rate. (Photo: AP)

The Dow Jones Industrial Average (INDEXDJX:.DJI) breached 20,000 for the first time ever in history, continuing the post-election rally in response to Donald Trump. The Dow opened slightly under the historical mark at 19,994.48 before quickly breaching.

The markets have reacted favorably to President Trump showing he is serious about fulfilling campaign promises of lower taxes, less regulation, and more fiscal spending. After a breakfast with business leaders on Monday, he said they are aiming to reduce burdensome regulations by 75%.

U.S. President-elect Donald Trump is seen speaking on a television on the floor of the New York Stock Exchange (NYSE) in New York, U.S., on Wednesday, Nov. 9, 2016. U.S. stocks fluctuated in volatile trading in the aftermath of Trump’s surprise presidential election win, as speculation the Republican will pursue business-friendly policies offset some of the broader uncertainty surrounding his ascent. Photographer: Michael Nagle/Bloomberg

The Dow crossed the historical milestone just 64 days after crossing the 19000 threshold for the first time ever. It was flirting with 20,000 for weeks and came within a fraction of a point on January 6, but pulled back. Throughout the rally, materials and financials have been key and continued their surge after President Trump on Tuesday signed an executive order green lighting the construction of the Keystone XL and Dakota Access pipelines.

But even as President Trump begins to win over the country and investors, the latter of which supported his rival during the election, the media continues to naysay. On Tuesday, just one day before the Dow crossed 20,000, the headlines were bleak.

Analyst: Trump Rally Is Over, Stocks Could Fall 25%

The headlines were reminiscent of the dire prediction made by New York Times economist Paul Krugman, who claimed the markets would “never” recover if President Trump was elected.

Dow Closes Above 20000 for First Time Ever on Trump Rally