HomeNewsEconomyUnemployment Falls to 3.9%, Lowest Since December 2000

Unemployment Falls to 3.9%, Lowest Since December 2000

A “Now Hiring” sign hangs on the door to the Urban Outfitters store at Quincy Market in Boston, Massachusetts September 5, 2014. (Photo: Reuters)

The U.S. economy created 164,000 jobs in April and the unemployment rate fell to 3.9%, the lowest level since December 2000. While the number of jobs missed the 190,000 median forecast, jobs gains occurred in higher-paying sectors.

The number of unemployed persons, at 6.3 million, also edged down over the month. 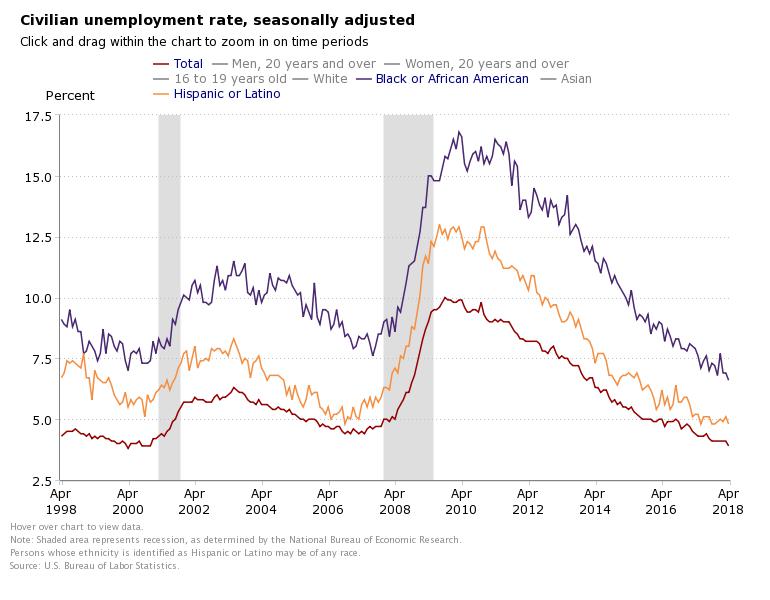 The labor force participation rate (62.8%) and the employment-population ratio (60.3) were largely unchanged. The U-6 unemployment rate fell to 7.8%, the lowest level since July 2001. The alternative measure gauges total unemployment including marginally attached workers and those employment part-time for economic reasons.

That’s significant because it shows the U.S. economy has reverted back to a stronger full-time economy, rather than a part-time one. Under the Obama Administration, many of the jobs created were part-time and low-paying.

Employment in manufacturing increased by 24,000 in April. Most of the gain was in the durable goods component, with machinery adding 8,000 jobs and employment in fabricated metal products continuing to trend up (+4,000). Manufacturing employment has risen by 245,000 over the year, with about 75% of the growth in durable goods industries.

Wages also continued to trend up in April.

Moody’s Analytics Chief Economist Mark Zandi said earlier in the week that the U.S. unemployment rate “will soon be in the threes” if job creation continues “at this pace.” His remarks came with the release of the latest stronger-than-anticipated ADP National Employment Report.

ADP said the U.S. private sector added 204,000 jobs from March to April, beating the 190,000 median forecast. The ADP National Employment report is derived from actual payroll data, while the Employment Situation is derived from data collected in a household survey.

With these revisions, employment gains in February and March combined were 30,000 more than previously reported.