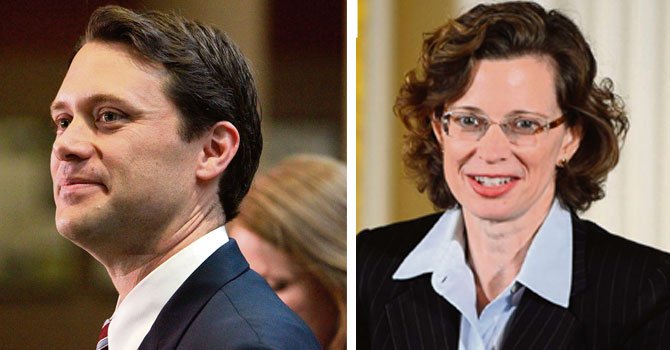 It’s no secret Democrats are hoping strong recruits in the Georgia Senate race and gubernatorial contest will help to offset Republican gains nationwide. Listening to some pollsters, pundits and party talking heads, it appears they have a more than decent shot at calling their efforts a success.

But in a cycle we now know has gone from just “leaning” toward a favorable political environment to a “likely” favorable one for Republicans, can Democrat candidates really pull off an upset in one or both of these two closely-watched contests?

We will first take a look at Peach State data overall, then take a closer look at the individual races and their ratings. As usual, we will touch on the many different variables used in our projection model, then discuss the probability of each projection. Because we have projected David Perdue the likely Republican nominee in the Georgia Senate race, for the purposes of this analysis we will focus on a head-to-head matchup between Perdue and Michelle Nunn. Democrats had hoped Republicans would nominate a less electable candidate, such as Broun or Gingrey, but that is highly unlikely now.

Let’s start with some historical voting patterns and demographic changes in the state of Georgia. Please note that polling data is averaged from the surveys included in the overall head-to-head match-ups.

Carter vocalized his hope that Georgia’s changing demographics can help him end the Republican Party’s 12-year domination of the state’s highest office. The proportion of white voters shrunk 9 points to 66 percent from 2002 to 2010, and the decrease was even more pronounced during presidential election cycles. Roughly 44 percent of Georgia residents are now minorities — which is up by 7 points over the past decade — and nonwhites could outnumber whites in Georgia by 2020. Yet, presidential election results have not historically mirrored these demographic changes.

Though Bush destroyed Kerry by roughly 17 points in 2004, Mitt Romney soundly defeated President Obama 53.30 to 45.48 percent, a slightly larger margin than the 52.10 to 46.90 percent margin McCain carried the state by in 2008. The not-yet purple state remains greater than 10 points more Republican than the national average.

It would appear Carter was premature in his reliance upon black voters to carry him to the Governor’s Mansion. Part of his problem is that he missed the fact that black voters in Georgia are more conservative than they are nationwide. In 2004, Bush won around 12 percent of the black vote, up from 7 percent in 2000, and Gov. Nathan Deal has outperformed Republican candidates, as well. If we are to believe the polling data, he still is. In the small sample of polling we have to examine, Gov. Deal has consistently enjoyed the support of a not-so insignificant number of black voters in Georgia, 15 percent. A smaller 12 percent support David Perdue.

It’s true that Republican candidates poll better in earlier surveys among black voters nationwide, but not in Georgia.

If either candidate hopes to upset their opponent, then they will have to win over a greater share of an increasingly Republican-voting, white electorate. Unfortunately for both Carter and Nunn, as we’ve seen in other southern states like Louisiana, Democratic support among white voters is on the decline. Support for Democratic candidates among white voters has fallen into the 20s, which theoretically means they have almost NO chance at putting together a majority on Election Day, despite the growth of the minority electorate.

Further compounding Democrats’ problems, among all subgroups to include white voters, Republican voters are far more likely to say they will “definitely be voting” come November. The gap among voters who say they are definitely voting is currently 11 points in favor of Republican candidates (67 – 56 percent), with independent voters almost as likely to say they will definitely vote in the upcoming general elections (64 percent). Independents favor deal by 10 points (47 – 37) and David Perdue by 8 points (46 – 38 percent). While the headline for the last Atlanta Journal-Constitution poll claimed Nunn was leading her Republican opponents, she is actually trailing among voters who can actually be projected to vote by 3 points. The same is true for Carter against Gov. Deal, which raises serious questions about the survey’s methodology considering the discrepancies in the various subgroups’ results.

When looking at the polling it is important to remember that — even though the headline results suggest close contests — Republican candidates have not even begun to unload on their Democratic opponents. Gov. Deal, who has a considerable war chest, has all but ignored Carter and his feel-good campaign, even as liberal-leaning Georgia-based media outlets hammer him over recent ethics investigations.

Republican Senate candidates are still beating up each other, with the well-financed David Perdue leading in the money race.

Nevertheless, when we factor in all the variables used on our model, which can be reviewed more on our 2014 Senate Map Predictions and our 2014 Governor Map Predictions, the results are not good news for either Carter or Nunn.

Because of Gov. Deal’s bad press problem, we have recently adjusted the ratings from “Safe Republican” to “Likely Republican” with a 74 percent chance that Deal will be reelected. The new rating now nearly mirrors the Georgia Senate race. With Broun and Gingrey out of the equation, Democrats’ hopes have faded, despite Michelle Nunn as their nominee. Perdue has a 71 percent chance of defeating Nunn in November.

Worth noting, many are assuming the two Democratic candidates — Michelle Nunn, daughter of ex-Senator Sam Nunn, and state Sen. Jason Carter, Jimmy Carter’s grandson — are, in fact, strong candidates. But do we even have strong evidence to support this assumption? We should be careful when pundits offer analysis that is predicated on such a superficial argument. Even though candidate recruitment is a very important variable in our election projection model, we must always avoid tipping the scales based on one variable alone, particularly when it contradicts the fundamentals of a state and an election cycle.