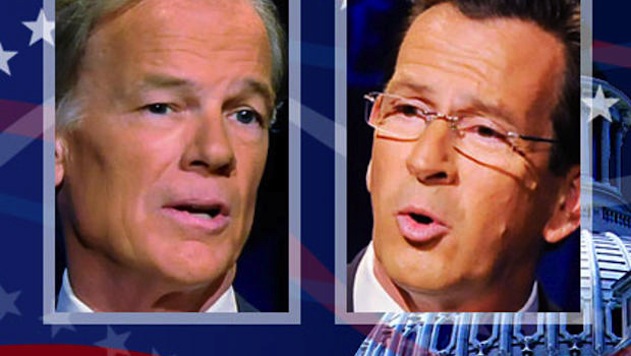 The Connecticut Governor race is the eleventh article in what is a succession offering expanded analysis of our ratings on the 2014 Governor Map Predictions. Former Stamford Mayor and incumbent Governor Dannel P. Malloy will face the former U.S. Ambassador to Ireland and his 2010 Republican opponent, Tom Foley. Considering new developments in the race and the release of the latest Connecticut Governor poll, now is as good of a time as ever to revisit this gubernatorial contest.

Gov. Dan Malloy’s approval rating actually took a turn for the better last year after, under his direction, the state rammed through stricter gun laws following the Sandy Hook tragedy. Now, it looks as if the liberal honeymoon is over. The first Quinnipiac Univsersity poll found Malloy trailing Tom Foley, 43 percent to 40 percent. Malloy was on top of Republican Mark Boughton 43 percent – 36 percent, but the survey found that only 44 percent of voters thought Gov. Malloy deserved to be reelected.

We only have polling data from one pollster, Quinnipiac University, which often gives me reason for pause. However, Quinnipiac has a considerably accurate track record, particularly in their home state of Connecticut. The model used at People’s Pundit Daily researches pollsters’ track records, then weighs them based on the ratings they are on assigned, with 1 being the most accurate and 5 being the least accurate (we formerly rated pollsters on a scale from 1 to 4). Quinnipiac has an overall rating of 2.25 and, even though they were slightly outside of our 3-point threshold in 2010, we can still ascertain voter sentiment and trends by comparing variables in 2010 to 2014.

We will come back to polling data more in a bit, but let’s first discuss a little bit about the state’s political background.

We tend to think of Connecticut as a Democratic stronghold — mainly, because of Republican candidates’ pathetic performance on the presidential level — but Republican governors resided in the Governor’s Mansion for 16 years in a row prior to Malloy winning against the odds in 2010. Voters in the Nutmeg State, historically, have been more than willing to turn to the Republican Party on a gubernatorial basis.

The Republican primary had a ton of influence on this election prediction, and Foley didn’t have the road paved for him early on. Mayor Mark Boughton and State Senate Minority Leader John McKinney are also vying for the nomination alongside Foley and others. But, with a week to go before the Republican convention, we now confidently project Tom Foley will be the Republican nominee for governor. The first two Quinnipiac polls did find Foley with a slight edge over his GOP challengers, which was most likely due to name recognition, but I always felt his politics fit the state better and was basically waiting for the polling to confirm my suspicions.

Foley now enjoys a dominating lead over the Republican field in terms of both money and voter support, with 39 percent of Connecticut Republicans choosing him as opposed to Boughton, who earns just 9 percent and McKinney at 8 percent. No other Republican in the crowded field even tops 5 percent, with 28 percent remaining undecided. With Foley as the Republican nominee, the Republicans’ chances of flipping control of the Governor’s Mansion have increased significantly.

Getting back to general election polling, “It’s deja-vu all over again,” said Douglas Schwartz, director of the Quinnipiac University poll. Admittedly, Schwartz was referring to the two candidates being “locked in a dead heat.” But, is it really?

Unlike 2010, there has been a clear and consistent pattern of voter’s remorse. In the very first survey conducted in June, 2013, only 44 percent of voters thought Gov. Malloy deserved to be reelected. Now, in the latest survey, by a 48 – 44 percent margin voters say he does not deserve to be reelected, an uptick of 4 points against the incumbent. The particular issues that are hurting Malloy are unique to the state in some ways, but are typical fundamentals that sway gubernatorial elections. Unlike national races, “All politics really is local,” and the issues that impact the lives of state residents and voters are working against Malloy.

“Economic issues are dragging Gov. Malloy down,” Schwartz correctly noted. “A bright spot for Malloy is that voters think he has strong leadership qualities and is honest and trustworthy.”

Taken together, the levels of disapproval on these ever-important issues are one career-ending, three-fold combination. When we factor in all of our variables, including Partisan Voting Index, which will be an identical D+7 that we saw in 2010, we project Republican Tom Foley has a 54 percent chance of victory. However, 45 – 55 percent qualifies as a “Toss-Up” on our model.

Considering Malloy trailed Foley in most polls conducted during the final month of the race in 2010, that is likely the safer assessment even though my gut is telling me Foley has the upper hand. Unlike 2010, when Malloy enjoyed a lead until the final month of the campaign, Foley has consistently polled ahead or even with the incumbent. Nevertheless, Gov. Malloy is in some serious trouble. I’m just not ready to count him out yet.

If you would like to read more about the election prediction/election projection model used at People’s Pundit Daily, view our 2014 Governor Map Predictions.