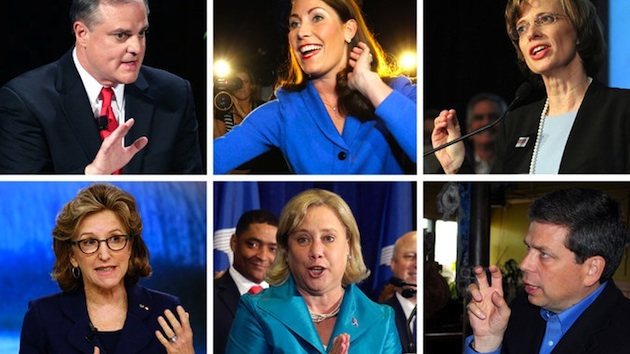 We have heard an awful lot about the increased turnout among black voters and Democrats’ gains in early voting numbers from 2010 to 2014. However, most of the so-called political gurus are making an apple to oranges comparison in key Senate races. While PPD’s final Senate ratings and predictions will be released Monday — with several going out between now and then — we wanted to take a look at some of the data in response to various claims.

Nate Cohen’s early voting analysis, for instance, is wrong. On GOP turf, it’s not enough for Democrats to simply improve their 2010 numbers, which they did in 2012 and still lost. They must turnout an electorate that looks more like a presidential election, a task they have thus far failed to do, then get a larger-than-average share of the white electorate to vote for their candidates.

Rather than comparing black voter turnout in 2010 to turnout in 2014, which is frankly irrelevant, instead pollsters and pundits should be comparing 2012 to 2014. PPD’s election projection model assumes a turnout far better for Democrats than they experienced in 2010, but less than 2012 in most states and, with the data we have available, it would appear that is turning out to be the case.

Below we have compiled the share of the black vote juxtaposed to the overall electorate for 2010, a wave Republican cycle. Then, we compiled the black vote share of the early vote in 2012, their final share of the overall electorate in 2012 and, finally, the current early vote share in 2014, as reported by the Election Projection team at my alma mater — the University of Florida — which is the go-to citation for journalists this year reporting on early voting numbers.

We have validated the numbers with each state’s secretary of state office to ensure the data was current and accurate when it was available. What we found is simple: Black voters aren’t enough to save incumbent Senate Democrats. The challenge each candidate has is a different one, depending upon the demographics of the electorate. However, generally speaking, without far outperforming President Obama among white voters in each state, often by double-digit margins, they will lose. Let’s take a look at the table below to drive the point home.

We can clearly see that the final black vote share fell as a percentage of the overall electorate in each state, compared with their early voting numbers. This is particularly concerning for Democrats, because from the data there come little reason to believe the pattern won’t hold. That’s why they refuse to deviate from the 2010 vs. 2014 comparison, which is again, inaccurate.

In North Carolina, black voters are making up roughly 3 percent less of the electorate than in 2012. The state, of course, was the only state that flipped and voted for Mitt Romney. If we listen to the media pundits and their incessant regurgitation of the fact that Democratic ballots are outpacing Republican ballots 47.6 – 32.0, we might think Thom Tillis was doomed. But again, in 2012, Democrats were ahead 47.6 – 31.5 in early voting, yet went on to lose statewide. That spread was even worse for Republicans in 2010, but they were victorious in races across the state by double-digit margins.

How did that happen?

First, black voters’ share of the overall electorate fell by Election Day and, second, older and whiter voters in the South — particularly in North Carolina — are registered Democrats who disproportionately and reliably vote Republican.

Currently, 54.5 percent of the early voting ballots in North Carolina are from voters 60 years and older, a Republican-friendly demographic and an increase from the 35.5 percent they were in 2012. If Hagan wins, it will be because she peeled off enough of these older, white voters, who also represent a good number of a bloc we have dubbed McCain-Hagan voters.

When Kay Hagan first ran for the Senate six years ago, she got 106,000 more votes than President Obama. However, for nerdish reasons you don’t care to hear about, there are actually 120,000 McCain-Hagan voters. Yet, when we look at who these voters are, then it becomes clear why we aren’t putting too much stock in the polls, in a state which historically, have underestimated Republican support. These voters, who disproportionately make up the roughly 8 percent of voters still undecided, are older, whiter, and more likely to be married than in any other battleground state.

Just 4 percent of undecided voters are under 40, and more than 96 percent are white. In fact, 18-29 year-olds make up just 4.7 percent of the ballots, down significantly from the 13.2 percent they represented in 2012. As of now, there are just too many traditionally Republican voters unsure of their vote for Senator Hagan to believe the polls. She can certainly win, but she needs to start polling roughly 2-3 points higher among whites.

PPD’s election projection model currently rates the North Carolina Senate race a Toss-Up, though we will make our final call on Monday.

Louisiana Sen. Mary Landrieu may survive until a December runoff, but due to her precipitous decline among white voters, she is more than likely going to lose, regardless. Currently she is polling at an abysmal 22 percent among white, which might even fall further if her recent comments catch fire.

“To be very, very honest with you, the South has not always been the friendliest place for African-Americans,” Landrieu said. “It’s been a difficult time for [President Obama] to present himself in a very positive light as a leader. It’s not always been a good place for women to present ourselves. It’s more of a conservative place, so we’ve had to work a little bit harder on that.”

PPD’s election projection model currently rates the Louisiana Carolina Senate race a Leans Republican, though we will make our final call on Monday.

We recently dove into the Georgia Senate race in more detail, and would certainly encourage you to look at it here for more of our analysis. But the basic argument in Georgia remains the same. The black vote share actually increased by .3 percent from 2008 and 2010 to 2012, yet the Republican nominee Mitt Romney actually increased his margin over McCain by 4 points. So, we once again find Michelle Nunn’s challenge to be one of outperforming Obama’s share of the white vote substantially.

If Nunn is in the low to mid 30s among white voters or higher on Election Day, then she will win. Otherwise, she will lose.

Perdue remains the favorite in the Georgia Senate race despite the recent hype, with the GOP enjoying a 69 percent chance they will pick up a seat that clearly still Leans Republican.