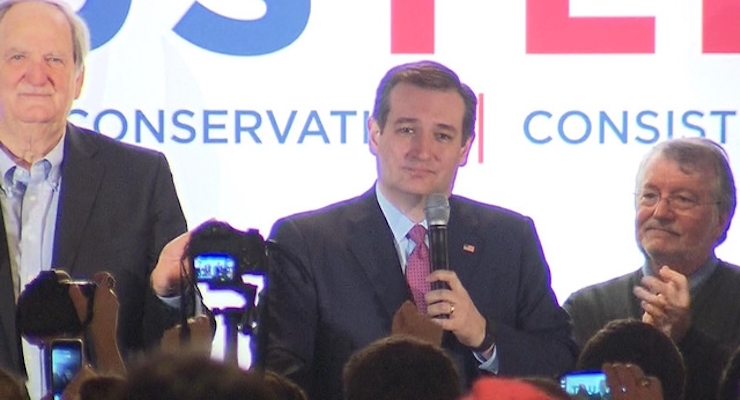 Why Cruz Looked Flustered in New Hampshire Speech. He Should Be.

Wednesday, we spelled out the status of the Republican nomination and what the results of the New Hampshire primary meant moving forward. We also told you to ignore pretty much everything you will hear and read about the topic, and here’s a perfect example of why.

Headline at The Fix: “Don’t sleep on Ted Cruz. The next five weeks look very, very good for him.” 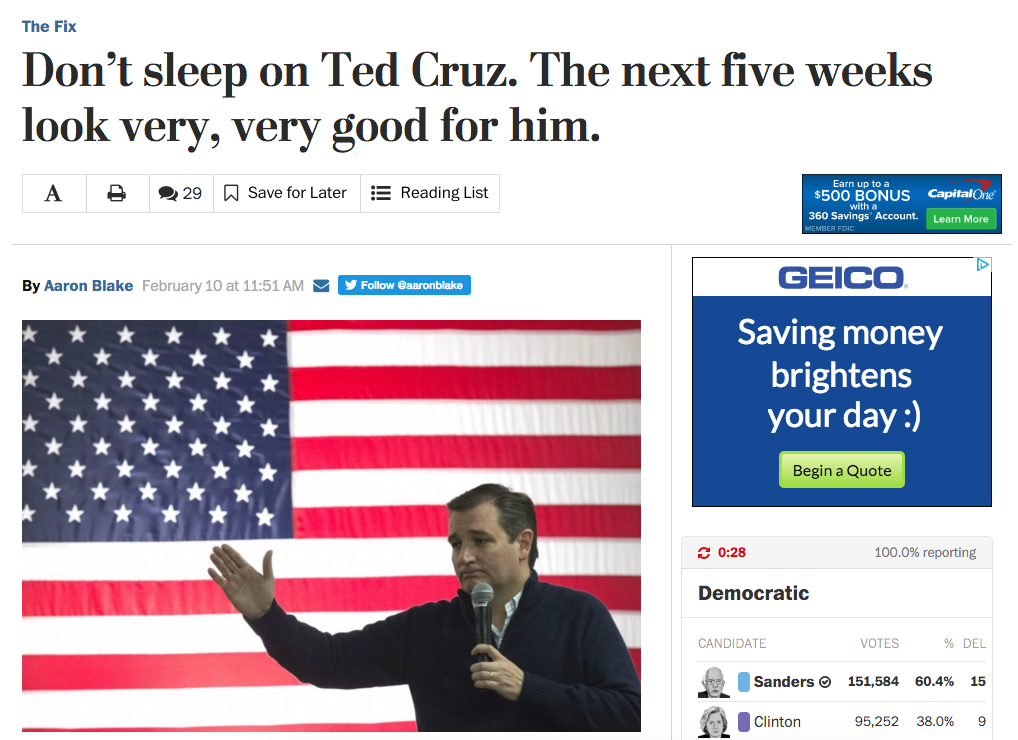 Believe us, the PPD Election Projection Model isn’t sleeping on Sen. Cruz, either. But not for the same reasons as The Fix. He has put together a national campaign that understands this race is a marathon, not a sprint. We give him credit for his fundraising prowess and playing a long-ball game.

Worth noting, The Fix, which is run by Chris Cillizza, who Donald Trump called “one of the dumber and least respected of the political pundits,” doesn’t have a particularly good track record. The Donald is right. With only a few short weeks left to go before the 2014 midterm elections, Cillizza still had his model favoring the Democrats to hold control of the U.S. Senate against what was clearly an “imminent” Republican wave.

With that said and out in the open, Aaron Blake, the author of this particular piece, argues that “moving forward it’s easy to see how the Granite State could one day look like a very minor bump along Cruz’s path to the Republican presidential nomination.”

The argument basically holds that New Hampshire is far more secular and “the next few weeks of the GOP race look a whole lot more like Iowa than New Hampshire. And that is fantastic for Cruz.” He bases this argument on the white evangelical share of the electorate in Iowa and the coming contests in the South.

Except, as we pointed out on Wednesday, that’s not really what the historical and empirical data suggest, nor is the argument supported by the New Hampshire primary exit polls. In fact, to explain our headline, Sen. Cruz looked a little shaken on Tuesday during his post-New Hampshire primary speech because he knows what we know looking at the data and raw vote.

Trump, who has a substantial lead on the PPD aggregate average of Palmetto State polls, dominated among self-described conservatives, very conservatives and white evangelicals, all blocs Cruz was hoping and expecting to consolidate. In addition, Cruz did not pull significant support from libertarians with Sen. Rand Paul out of the race, as was also expected (not by us, however).

Looking at the pre-New Hampshire surveys down South, which are roughly three weeks old, that appears to still be the case. Cruz has a lot of work to do between now and February 20. More importantly, while the evangelical share of Republican primary electorate in South Carolina could be and has been as high as two-thirds, the state has voted for the winner of the New Hampshire primary in every nomination cycle except for one since 1980 (barring 2012).

In 2012, former House Speaker Newt Gingrich road a post-debate wave to victory after he put on a great performance and Gov. Mitt Romney delivered a disappointing debate performance. However, Gingrich didn’t win the Iowa caucus. Former Sen. Rick Santorum won the 2012 Iowa caucus with overwhelming evangelical support, yet Southern evangelicals didn’t back him. The lesson of 2012 is that debates matter. It’s not that we should throw out overwhelming empirical evidence to the contrary.

In other words, despite the composition, the comparison to Iowa is simply historically inaccurate. What good will it do for Cruz if evangelicals come out if they vote for Trump by similiar and poll-predicted margins. As of now, there is little reason to suspect otherwise, particularly with religion and social issues far below jobs, the economy and national security.

It’s also important to remember that Iowa is a caucus state and South Carolina is a primary, which helps explain the disparity in the evangelical vote each cycle, which other “pundits” never acknowledge. In Iowa, the Texas senator bet the farm, spent millions of dollars and a year of his time building an organization to make his case at the caucus–among other, more regrettable things–yet still only won by a few points.

The fundamental problem with the “millions of courageous conservatives” strategy Ted Cruz has staked it all on–aside from the fact there aren’t enough of them to win a general election–is that they voted for Donald Trump, not him.

Is it possible for Sen. Ted Cruz to consolidate “courageous conservatives” and win South Carolina and, more importantly, the nomination? You bet. We believe Cruz will be extremely competitive in South Carolina and the SEC primary. But a combination of Trump’s strengths among Cruz’s core target voters, momentum and the dynamics of the field, means it’s far more likely that the frontrunner is well-positioned to take the top spot in South Carolina on February 20.

“And if you’re him [Cruz], the above has to make you feel very good about your chances,” Blake wrote for The Fix. That’s a cute way to end an article posing as election analysis. But in reality, at least according to PPD’s Election Projection Model, Cruz’s chances of winning the South Carolina Republican primary stand at only 15%, while Trump’s are much greater (61%).