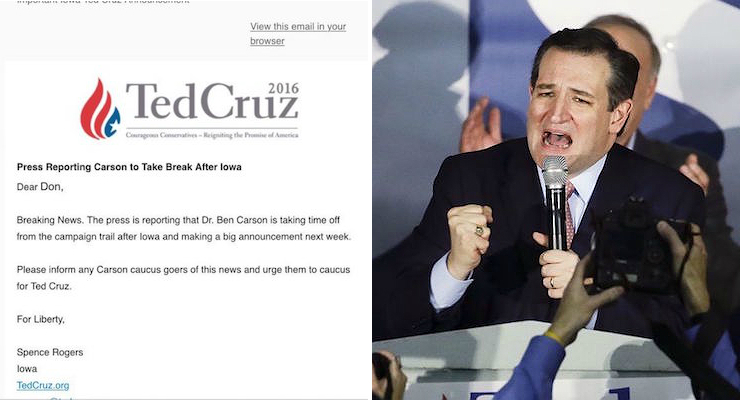 EARLIER: PPD has learned that caucus site supporters of Texas Sen. Ted Cruz were falsely telling caucus-goers Dr. Ben Carson had suspended his campaign. Based on the reports and evidence, it would appear that the spreading of this false information was intentional and specifically targeted the supporters of Dr. Carson because the Cruz campaign previously identified them as voters highly likely to back Cruz as their second choice.

UPDATE: Breitbart News has obtained voicemail audio that stands in complete contradiction to the defense put forward by Sen. Ted Cruz, as well as Jeff Tyler, the campaign’s communications director. Tyler specifically denied such calls went out making these claims during an appearance on “Hannity” Wednesday night.

Hello, this is the Cruz campaign with breaking news: Dr. Ben Carson will be [garbled] suspending campaigning following tonight’s caucuses. Please inform any Carson caucus goers of this news and urge them to caucus for Ted instead. Thank you. Good night.

It’s important to note that the calls were placed after the Carson campaign had already clarified that Carson was not suspending his campaign. However, upon researching the results, Trump carried this particular precinct (DC-A-B). That said, as explained in the initial original story below, that’s not necessarily relevant as to whether this tactic swayed the results of the Iowa caucus (Read more below).

“The voicemails are in line with the reports that were made at that time,” Cruz campaign spokesperson Catherine Frazier told Breitbart News. “Our campaign shared an accurate report that Carson was suspending campaigning after the caucuses – he went home and he went to D.C. – and these voicemails do not suggest that he would completely drop out of the race.”

Republican primary voters will have to read the timeline below and decide whether they believe that or not. However, it is undeniable that the story from the Cruz team has evolved and the voicemail was not in line with reports at the time.

BACK TO ORIGINAL STORY: “There has never been a more tainted victory in the Iowa caucuses,” said Jason Osbourne, senior communications strategist for Ben Carson. “From the mailing denounced by the Iowa Secretary of State to his abject lies about Dr. Ben Carson, Senator Ted Cruz demonstrated he is a worst kind of Washington insider. No candidate who claimed to be an outsider would stoop to these tactics.”

The “mailing” cited by Mr. Osbourne, which claimed Iowans listed were guilty of a “voter violation” for lack of activity in past elections, made headlines the day before the Iowa caucus. But Osbourne produced an internal Cruz memo from Spence Rogers, a member of Cruz’s Iowa team, which instructed supporters to spread the false word to caucus-goers. On Monday, Cruz’s team deployed some 12,000 volunteers, with precinct captains in roughly 90 percent of Iowa’s 1,681 precincts and county chairs and supportive pastors across the state. With such a significant ground game in place, it isn’t hard for analysts to conclude the effort could have had a significant impact on the outcome of the Iowa caucus results. If Cruz’s captains failed to sway just 4 votes each based on this information, Donald Trump would’ve won the Iowa caucus.

“This doesn’t look good for Sen. Cruz and certainly isn’t the news you want floating around the day after a win,” said Richard Baris, PPD’s senior political analyst. “I’m a data guy, and this smells really bad. It looks like a premeditated ‘Plan B’ effort.”

Because of Cruz’s data juggernaut, the campaign had already identified Carson supporters as a threat, despite their second choice preference. With Carson pulling in support from such a similiar pool of voters, particularly self-described evangelicals, a large enough showing from Carson could’ve denied Cruz a win and could’ve allowed Trump to carry the night. According to Baris, this would help to explain the disparity between the entrance polls and the results.

Carson won't go to NH/SC, but instead will head home to Florida for some R&R. He'll be in DC Thursday for the National Prayer Breakfast.

What’s important to remember is that neither Chris Moody at CNN or Dana Bash, whom the Cruz team is scapegoating, ever reported that Carson was quitting. On the contrary, Moody only initially said he was going to travel to Florida rather than New Hampshire. Yet, hours later the memo above went out with the added assertion that Carson was calling it quits and had plans to make a “big” announcement, which was never reported.

Folks, Ben Carson is just making a brief stop at home in FL tonight and campaign says he'll be back on the campaign trail by Wednesday.

Further, Rep. Steve King, who serves as Cruz’s state chair, tweeted the falsehood after 8:30 p.m. local time, when he knew full well that it was incorrect. Moody had already sent out repeated clarifications and, again, never reported on any break or announcement.

Carson looks like he is out. Iowans need to know before they vote. Most will go to Cruz, I hope. https://t.co/lW5Js50EMA

Worth noting, Carson’s wife reported to have shown up to a caucus site to find supporters overjoyed to have her there to set the record straight with caucus-goers in the room. Following a speech, he carried that particular site. Unfortunately, PPD has spoken with numerous caucus-goers with identical stories, absent the clarification.

“Cruz over-performed no doubt in large part due to his organization,” Baris said. “But this helps me make sense of what otherwise appeared to be a strange and almost random pattern of results in certain counties. It certainly stains, at least in my mind, what previously appeared to be just a very impressive victory as a result of a well-engineered, organized grassroots campaign.”

PPD reached out to Jeff Tyler, the communications director for Ted Cruz. However, we did not receive a comment or response to the allegations. Tyler, among others on the Cruz team, were retweeting the unconfirmed reports ahead and during the caucuses.