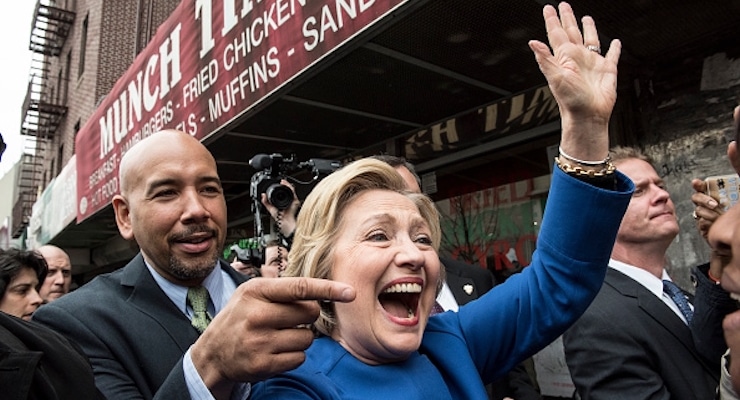 Hillary Clinton campaigns in New York, where she is leading Bernie Sanders in the polls. Donald Trump leads the GOP primary race in both Maryland and New York as well according to latest polls. (Photo : Andrew Renneisen/Getty Images)

PPD can now project Hillary Clinton will be the winner of the New York Democratic Primary, fending off a late-surging Sen. Bernie Sanders on her home turf. Mrs. Clinton won with strong support from minorities in the city, particularly in Kings County and Queens County, who helped the state’s former senator end Sen. Sanders’ nearly month-long seven-state winning streak.

The win, which lit up the Empire State Building, means that Mrs. Clinton’s rival is a bit more likely to find it mathematically impossible to capture the nomination with delegates earned by the time the month is out. However, Mrs. Clinton trailed her rival in Albany County, home to the state capitol and in the vast majority of counties in The Empire State.

“There’s no place like home,” the former secretary of state said in her victory speech in New York City on Tuesday. “The Democratic primary season is now in the home stretch.”

More than 8 in 10, on the other hand, viewed Sen. Sanders as honest and trustworthy. That’s roughly the same ratio we’ve seen in previous states.

In another unimpressive gauge for Mrs. Clinton in her home state, about half in these preliminary exit polls say she has run the “more unfair” campaign. Only a third said the same about Sen. Sanders.

“We didn’t get the victory we had hoped for this evening, but what’s important is that it looks like we’re going to win a lot more delegates in New York than any state that voted or caucused before tonight,” Sen. Sanders said in a statement released late Tuesday. “We remain in a position to take the pledged delegate lead when almost 700 delegates are up for grabs on June 7.”

The Democratic rivals compete next Tuesday in Pennsylvania, Connecticut, Maryland, Delaware and Rhode Island. In all, 383 total delegates are at stake.