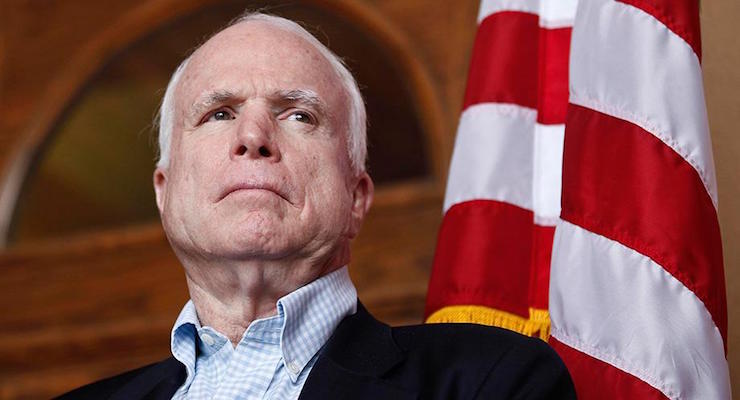 Sen. John McCain, R-Ariz., on Saturday withdrew his endorsement from Donald Trump after a leaked audio from 2005 revealed him making lewd remarks about women. The New York businessman was talking with Billy Bush in 2005, then of “Access Hollywood,” while on a bus arriving on the set of “Days of Our Lives” before taping a segment on the soap opera.

“He alone bears the burden of his conduct and alone should suffer the consequences,” Sen. McCain said in a statement. “Cindy and I will not vote for Donald Trump. I have never voted for a Democratic presidential candidate and we will not vote for Hillary Clinton. We will write in the name of some good conservative Republican who is qualified to be President.”

Billy Bush, the nephew of President George H.W. Bush and cousin to President George W. Bush, was also making what most found to be inappropriate comments. Both men have since apologized for their remarks 11 years ago, which were only now published by Clinton-friendly The Washington Post mere hours before WikiLeaks was scheduled to release damaging documents on Hillary Clinton. Melania Trump released a statement saying the “words my husband used are unacceptable and offensive to me,” but that “does not represent the man that I know.”

“I hope people will accept his apology, as I have, and focus on the important issues facing our nation and the world,” she said.

Here is my statement. pic.twitter.com/WAZiGoQqMQ

The conventional wisdom holds Sen. McCain made a smart, calculated political decision. He now holds a large in the average of polls and he, like other candidates down ballot, are understandably concerned Trump could drag them down in defeat. But depending on the outcome Sunday at the second presidential debate, it might prove to be a disastrous decision for the 2008 GOP presidential nominee.

Sen. McCain first won a 21-point victory in 1986 and, ever since, there has never been a serious primary or general-election opponent challenge. Despite unhappiness among his conservative base, the power of the incumbency, a vast political network and a massive war chest with high name recognition saved him from a tea party challenge in 2010.

Arizona has gone Republican in every presidential election since 2000. Yet, as a direct result of his weak stance on illegal immigration over his 30-plus years in Washington, The Grand Canyon State bears little resemblance to the one George W. Bush carried twice. This year, the five-term senator finds himself facing what could turn out to be the toughest challenger of his political career.

It’s political irony at its best. Some would say it is the result of political suicide and, for his failure to secure the border and restrain illegal immigration over 3 decades, he is running in a state that is 30% Hispanic. Unlike previous cycles, Democrats have had great success registering new Hispanic voters to vote and Sen. McCain needs a large white turnout to ensure his reelection.

With the exception of one poll conducted by the Behavior Research Center, which appeared to be an outlier at the time, just every poll conducted prior to the Trump endorsement showed him locked in a statistical tie with Democratic challenger Ann Kirkpatrick. In fact, his problem was never the voters Trump has struggled with, it’s with the voters Trump is overwhelmingly winning.

“For many years, rural voters have tended to lean Republican in most races,” Earl de Berge, the pollster said. “But in 2016 Kirkpatrick is outpolling McCain by 43 to 39 percent in the state’s rural counties in a modest but important pattern we have noticed since January.”

“Whatever the reason, Senator McCain appears to have opened the door for Kirkpatrick to make gains with voters,” he added.

It was only after he stopped his adversarial relationship with Donald Trump that the race began to change. In the pre-endorsement poll, Behavior Research Center found support for Sen. McCain among Republicans was only around 51% with 27% defecting to Kirkpatrick in protest. In fact, polling showed Republicans were most undecided about how to vote in the Senate race (22%, compared to 16% among Democrats and only 12% among Independents.)

Following the endorsement and unity, Sen. McCain jumped to a 13-point lead over Kirkpatrick in a CNN/ORC Poll and began to perform in rural regions of the state.

As someone who polls this race daily, I can say with certainty that the vast majority of those Republican-leaning rural voters who were on the fence are Trump voters. And McCain’s weakness with voters in rural regions of the state is a direct result of his weakness on illegal immigration and his public criticism of Donald Trump. They will not fall in line and support someone who abandoned their candidate without at least first allowing him to apologize, explain himself and make his case to the American people during the debate on Sunday.

Believe me, an undetermined but very significant percentage of them may just “write in the name of some good conservative Republican who is qualified.” Just like Mr. McCain is doing at the top of the ticket.

Data aside, there is something I find to be troubling, even hypocritical, about Mr. McCain’s decision, as well as other Republicans. If Hillary Clinton is everything that Mr. McCain and other Republicans have claimed her to be, or even half of what they’ve claimed, then Donald Trump won’t “alone suffer the consequences,” the nation will.

Further, as it relates to McCain, those who live in glass houses shouldn’t throw stones. The most difficult moment to listen to on the Trump tape for me is when he said “[email protected]$$y”. Well, in 2008, after many documented temper fits by the Arizona senator, who is also human and fallible, he was quoted by reporters calling his wife a cunt. He had made the comment during an campaign event in 1992 where he was joined by his wife, Cindy, as well as campaign aide Doug Cole and consultant Wes Gullett.

“You’re getting a little thin up there.” McCain said as his face reddened. “At least I don’t plaster on the makeup like a trollop, you cunt.”

Melania Trump on Leaked Audio: "I Hope People Will Accept His Apology, as I Have"