From Mogadishu to Music: An Exclusive with J.T. Cooper 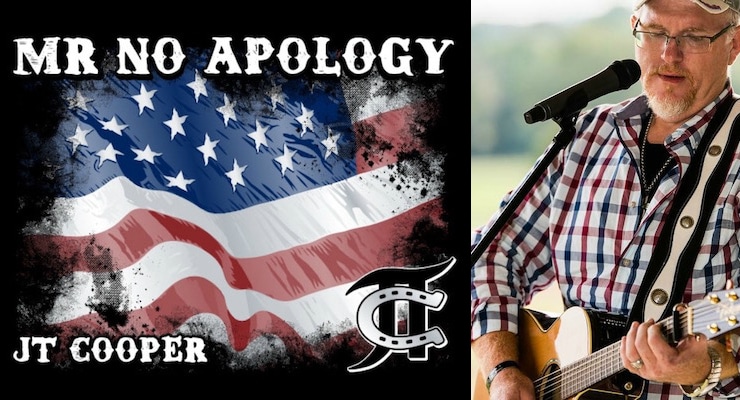 The adjustment from military to civilian life can be difficult for most veterans, in large part because just about any career change is dramatic. A few weeks ago, I had a chance to speak with someone who epitomizes this challenge, someone who has been on a journey that began in Jamestown Tenn., and has taken him from Mogadishu to music. On Independence Day, this past July 4th, J.T. Cooper released “Mr. No Apologies,” the first single on a soon-to-be released killer Country Rock album.

But the songs on the album represent more than just a collection of music. They’re a product of his new mission–to help men and women coming out of the service who are trying to figure out what their next move should be. He’s been there and, like so many others, it wasn’t always pretty.

“Not everyone can write a song, but at least I can give them something that they can relate to,” Cooper said. “Something no one else understands.”

After his role in the event culturally known as Black Hawk Down, J.T. Cooper visited the Country Music Hall of Fame, when and where he decided to share his music with the world. In 1996, J.T. Cooper found himself in Syracuse, New York, after being assigned to the 10th Mountain Division in Fort Drum. He was battling survivor’s guilt over the loss of his buddy Jimmy Joseph “Jimmy Joe” Martin Jr., who lost his life in Mogadishu, Somalia.

“Music made me a survivor,” he said. “There was a six-month period when it was a daily choice to live. It, along with a bottle of Jack Daniels, was on the table everyday for six months.”

In the military, a soldier always has direction, a purpose and a goal. You not only know you’re at Point A , but the location of Point B and how you’re going to get there. Out of the military, and with no one telling him what to do next or assigning him the next mission, he wondered what do with that “never surrender” attitude.

He decided his responsibility was to use music to tell his story. The inspiration for “Mr. No Apology” came from a meme he saw online, but the flag-waving, kick-ass Country Rock tune was the breakout single for the upcoming album “Coming Home” to be released in September. I got a preview during the interview and, take my word for it, it’s awesome.

“The majority of my music surrounds God, family and country. They are my three chords and a truth,” he said, in a reference to Country music icon Harlan Howard.

When asked what real country music was, Howard once replied “Country music isn’t nothing but three chords and the truth.”

“I may never be Garth Brooks, but everything that comes out of me you can bank on being 100% J.T. Cooper.”

No doubt “Mr. No Apology” is a hit, but Cooper hopes the real message of the album people take away and carry with them highlights the struggles of veterans. In the United States, 22 veterans each day commit suicide, while countless more feel lost and have a difficult time re-entering the civilian population.

“There’s so much noise out there. Everyone wants to be a star, but no one wants to stand for anything,” he added. “The old country rock stars couldn’t even get on the radio now, they’d be too afraid they might offend someone.”

J.T. was spending the upcoming Saturday before the interview with nearly two-dozen veterans and 40 songwriters. For each veteran, two songwriters will help to compose a song with the veteran, who may have something to put on the shelf, a way to say “there, I dealt with that or I have a way to memorialize that person or event.” For their efforts, the songwriters get inspiration by appreciation.

“Rise again,” a title released in the upcoming album, came out of that very experience, along with another song “Doing Things.” Cooper talks a lot about what retired U.S. Army Lt. Gen. William “Jerry” Boykin called it the “transcendent cause,” or the unique experience and feeling that you are fighter on behalf of something greater than the interests of a single person.

“The warrior fights for a transcendent cause, for something greater than himself,” Gen. Boykin told attendees at the second annual Operation Heal Our Patriots reunion.

“We were taught to serve, but where are you still serving something bigger than yourself,” Cooper said, adding how the Department of Veterans Affairs, or Veterans Administration (VA) is simply not equipped to deal with the sheer loss a veteran feels when he or she no longer is a warrior for a “transcendent cause” in life. “We’ve become MTV Cribs, where’s my reward. The VA comes out playing to that mentality. I think we’re doing a disservice to our vets handing out drugs, not helping them to get to the next level.”

Sure, it’s true there are plenty of success stories. That’s why many come back and transition to careers in law enforcement or other first responder careers such as firefighters. But thus far, addressing the void a veteran feels from the loss of the transcendent cause is largely taboo, a dynamic captured in the documentary film Honor the Code, which featured Cooper.

“You know a beer and a paycheck is never going to be enough,” he said. “They build you up to be a warrior but then take your weapons and send you home. My goal is to preach the mission. What am I doing to serve humanity. Veterans criticize civilians, but it’s our job to teach them. You weren’t any different when you came in. Instead of being mad, teach them.”

That goal is to complete this mission one song, one show at a time. During events, J.T. has taken to asking the crowd if they can name a single person that died for their freedom. Now, the number one request he gets is not for his autograph. It’s for him to write the name so they never again do not know the name of one person who died for my freedom.