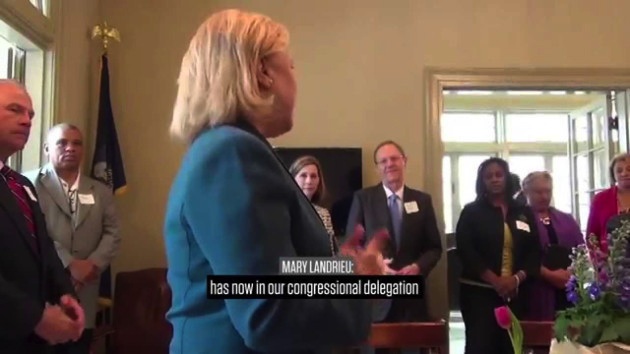 Louisiana Democratic Senator Mary Landrieu, who faces a tough reelection in November, has been on the receiving end of attacks from Republican for months. But the latest round over her effectiveness as the new chair of the Energy and Natural Resources Committee, is resonating with Louisiana voters.

Landrieu was a shoe-in for the role due to her seniority and the obvious political benefit of giving such a role to an embattled incumbent. The role has given her the ability to go home and tout her state’s new “clout” in Washington, which they would no longer enjoy if voters choose Republican Bill Cassidy in the fall. Landrieu even went so far as to tell the New Orleans-based Times-Picayune in April  “I’m indispensable,” because she can now “secure for Louisiana a significant and reliable string of revenue.”

However, there are two problems with Landrieu’s entire justification for reelection. Several polls conducted by SMOR and others, which we previously examined last month, show that Landrieu’s incumbency and seniority provide more of a reason to vote against her than they do to vote for her. Her approval rating hit an all-time low of 39 percent in the SMOR poll, and she trails Cassidy by 6 points in a survey conducted by the Republican polling firm, Magellan Strategies. Democratic polling firm CEA/Hickman Analytics also found her trailing Cassidy, but by a slightly smaller 4-point margin, 46 – 42 percent.

Despite the fact that her PAC has a documented track record of supporting opponents of the oil and gas industry, which constituents may find a bit dishonest, voters just don’t see her getting the job done.

“Last month, I said that the battle to build the Keystone Pipeline was not over,” Landrieu said Tuesday while discussing Wednesday’s largely meaningless committee vote on the Keystone pipeline. “Tomorrow is the next skirmish. Unlike some of my colleagues, I’m not going to give up until we get it built. The events in Iraq remind us how important it is to make our country energy secure. Keystone would bring twice as much oil to the United States than we import from Iraq. We need to build this pipeline now.”

The measure has zero chance to pass in the Senate, which Landrieu knows, because she has already had several conversations with Majority Leader Harry Reid (D-NV) over the pipeline. Reid ensured a plan to vote on a measure that would approve the pipeline absent Obama’s nod died last month, and according to aides, openly told Landrieu as much during a recent conversation about the upcoming confirmation hearings. Landrieu’s committee will approve Obama’s recent nominations of Norman Bay and Cheryl LaFleur to the Federal Energy Regulatory Commission, the agency that oversees America’s power grid.

While Landrieu makes an impossible attempt to appear moderate on the more controversial nomination of Bay, Louisiana’s other senator is concerned that he is just the next step in a climate change agenda that will hurt Louisiana’s economy.

“Norman Bay is a close ally of Majority Leader Harry Reid and President Obama – and I’m concerned he will serve as a rubber stamp for the President’s new unworkable cap-and-trade rule that will drive up electricity prices and hurt our economy,” Vitter said.

Louisiana voters by a whopping 79 – 15 percent margin say Washington should give precedent to job creation over climate change. By a 60 – 28 percent margin, the state’s voters say they are more likely to support someone who opposes the president’s climate change agenda.

The president’s job approval, which varies between 35 – 40 percent in recent polling, has become a real liability for Landrieu. Support among whites, women, and registered Democrats has cratered in recent weeks to the point it is becoming harder and harder to imagine how she can build a majority coalition in the fall, suggesting Republican attacks coupled with reality are taking a serious toll. Landrieu’s reelection team says her reelection strategy consists of maxing-out support among black voters and hoping to convince enough white Democrats that her seniority and independence from party leadership are reasons enough to stick with her over Cassidy in November.

Landrieu first won her seat in a competitive 1996 race and managed to increase her margins in 2002 and 2008, even as the state has become more solidly Republican. But the 2008 election cycle was a wave election for Democrats, and in a red state that voted for Mitt Romney by roughly 17 points, it is becoming increasingly clear that her incumbency and a few symbolic votes will not be enough to save the seat for the Democrats in November.

The Louisiana Senate race is currently rated a “Toss-Up” on PPD’s 2014 Senate Map Predictions, but that is likely to change in the next few weeks.

Benghazi Suspect Arrested And En Route To US, Where He'll Face Prosecution