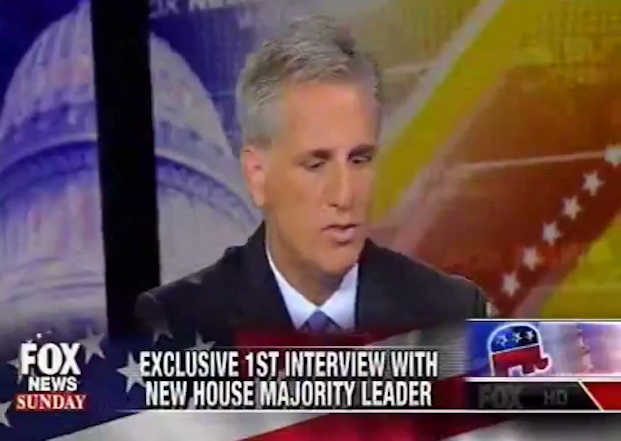 In the days following the stunning defeat of Eric Cantor, the first House majority leader in U.S. history to lose his primary, pundits were droning on and on about the impact the results would have on immigration reform. However, the defeat of Eric Cantor is potentially shaping up to be a big win for Main Street on another Capitol Hill battle.

The “new” House Majority Leader Kevin McCarthy (R-CA), the former House whip and establishment candidate, needs an issue to help bridge the divide between the establishment and activist wings of the party. McCarthy did not go unchallenged and even though he defeated or scared off his more conservative challengers, has not silenced the criticism.

“Dave Brat’s historic victory over Eric Cantor (R-VA) was a clear sign of a grassroots conservative resurgence, but how did House Republicans respond? They doubled down on the status quo,” Senate Conservatives Fund executive director Matt Hoskins wrote in an email to PPD.

In an interview on “Fox News Sunday” with Chris Wallace, McCarthy gave a clear indication that he will be allied with conservatives on another issue of utmost importance — the Ex-Im Bank.

“Do you agree with conservatives who say that the Export-Import Bank is crony capitalism and it should be put out of business, allowed to expire?” host Chris Wallace asked McCarthy. Here was his first response:

One of the problems with government is they go and take hard earned money so others do things that the private sector can do. That’s what the Ex-Im Bank does. The last authorization with the Ex-Im bank directed the President and the Treasury secretary to wind down the Ex-Im bank, negotiate with other countries to wind them down so we have a level playing field. We’ve got hearings going on next week in financial services, which I sit on. I think Ex-Im bank is one that government does not have to be involved in. The private sector can do it.

“So, straightforward question, you can say it right here. You would allow the Ex-Im bank to expire in September?” Wallace followed-up. McCarthy’s second answer is cause for conservative optimism.

“Yes, because it’s something that the private sector can be able to do,” McCarthy added.

Last year, the revolving door that has become the Export-Import Bank was almost slammed shut by conservatives in Congress, but this year supporting politicians, lobbyists and their friends who benefit from the Ex-Im Bank planned to strike early.

Since April, the Main Street versus Wall Street and K Street battle over the Export-Import Bank has been heating up. Conservatives have once again found themselves in a political fight with the Chamber of Commerce, a group that has spent millions pushing immigration reform to obtain cheap labor to benefit corporate America.

“We’re going to be doing our damnedest to focus some minds,” Christopher Wenk, the senior director for international policy at the U.S. Chamber of Commerce said of the intense lobbying effort underway over the Ex-Im Bank.

Cantor was largely seen as a voice for both K Street and Wall Street, both of whom favor the institution that acts as a corporate slush fund for special interest, and worse.

The Export-Import Bank, which was established in 1934 by Franklin D. Roosevelt, supposedly exists to “facilitate exports and imports and the exchange of commodities between the United States and other Nations.” But five minutes of actual investigative journalism tells a very, very different story.

“The Export-Import Bank is nothing more than a slush fund for corporate welfare,” Club for Growth Spokesman Barney Keller told People’s Pundit Daily in April. And it gets even worse. The bank “has given subsidies to everything from Mexican drug cartels and Enron, and it should be eliminated,” he added.

While McCarthy’s comments on the Ex-Im Bank are cause for optimism within conservative circles, it is unlikely that the new majority leader will be an ally on immigration when it reappears in the national debate. However, With nothing short of a refugee crisis occurring on the southern border, the possibility public opinion will overrule special interest on immigration, as well, increases.