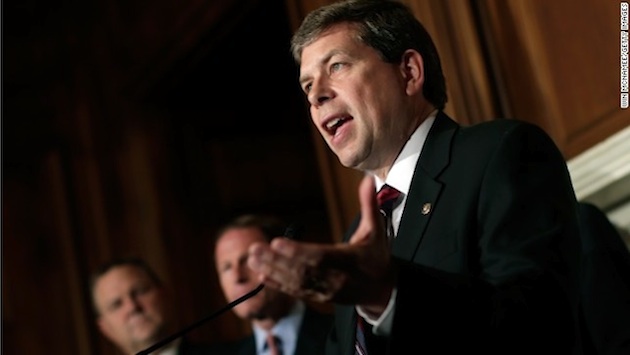 Alaska Democrat Sen. Mark Begich is under fire for running an ad that was not only insensitive, but also false and put in jeopardy an ongoing criminal prosecution. (Photo: Getty – See Image)

Alaska Democrat Sen. Mark Begich finally pulled heavily criticized ads Tuesday following demands from a crime victim’s family, but the damage to an otherwise flawless campaign has been done. Anchorage attorney Bryon Collins, the victim’s family attorney, said that the ads were not only insensitive, but also jeopardized the prosecution of a criminal suspect.

“The family [of the murder victims] directly and without question has told your campaign they want no part of this,” Collins wrote in a letter to Begich’s campaign that was obtained by The Daily Caller. “You[r] campaign is playing pure politics at the expense of my clients, and frankly has done only what is in the best interests of ‘Mark Begich’ rather than protecting the victims of the most serious crime in Alaska history.”

The ad highlighted the case involving 25-year-old Jerry Active, who is charged with murdering the victim’s two grandparents and the sexual assault of their two-year-old granddaughter. Active, who had a prior 2007 felony conviction, should never have been free to commit these crimes in the first place. However, a database error set him free via a parole he wasn’t eligible for and, last May, he allegedly committed the murders and assault. The state has since admitted by the mistake, but the Begich campaign dishonestly claimed his Republican opponent and former attorney general, Dan Sullivan, was responsible for the crimes.

In addition to the televised ad, Begich’s campaign Web site posted an image — viewable below — with Sullivan’s name on the plea deal signed in March of 2010. However, the campaign cropped the picture just above Assistant District Attorney Gustaf Olson, though the document was actually signed by him.

As far as we could tell from the obvious comparison of these two images, the Begich campaign intentionally tried to pull the wool over both the heads of fact-checkers and Alaskan voters. The page from Begich’s site has since been removed. However, it can still be viewed in Google cache. The image below clearly shows Sullivan’s name as a simple AG document template. 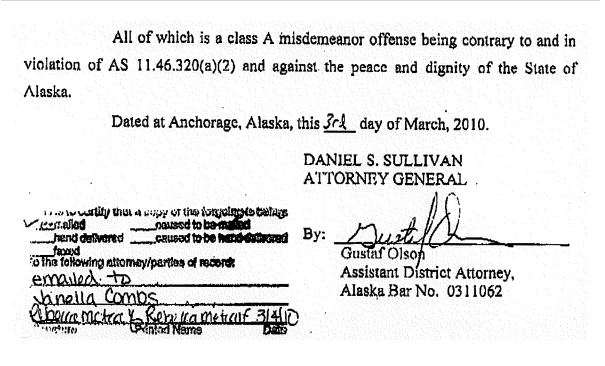 Worth mentioning, an Anchorage Daily News piece criticizing the state for the error, which insinuated blame but did not mentioning Sullivan specifically, has also been removed from the paper’s Web site, though we found it and it can be read here.

Meanwhile, Sullivan’s campaign agreed to pull its response ad almost immediately, an ad that flat-out accused Begich of “lying” about his role. In a written statement the campaign said that it was “pleased we could play a role along with the victims’ attorney to end it.”

Begich, on the other hand, refused to take the ad down over the weekend, opting instead to air a revised version without consideration for the victims’ family. Because of his refusal to pull the ad when requested and its wide condemnation for falsehoods, the denounced tactics of Begich’s campaign and the suffering it cause the victim received more air-time than the original ad. Begich, undoubtedly, hurt himself far more than he ever could have hurt Sullivan with the ad.

“Begich, surprisingly, really bombed this one,” says PPD’s senior political analyst Richard D. Baris. “If you are going to play the Bush-Horton card, then you’d better have two things on your side — the victim’s consent and the truth.”

Begich has managed to keep a moderate image and steer clear of answering questions regarding his support for the Obama agenda. The president is deeply unpopular in the state and Republican nominee Mitt Romney carried The Last Frontier by double-digits.

“Until now, Begich was running a strong campaign for a Democrat in such a conservative state,” says Baris. “Begich wanted nothing more but to run a localized campaign based on his deep ties to Alaska.”

According to data gathered from Gallup for the PPD 2014 Senate Map Predictions model, Alaska is now the sixth most conservative state in the union. Regardless of whether Republicans were successful in nationalizing the Alaska Senate race, Baris says it was always going to be a hard lift for Begich to get reelected.

“The polls in Alaska are notoriously useless. So, we have no choice but to rely upon the fundamentals,” Baris said. “Look, he beat a convicted felon in a Democratic wave election by under just 4,000 votes, and now its pretty much time to pay the piper for the seats they should never really have won in the first place.”

Begich was defying political gravity with his localized strategy, which basically asked voters to trust his character even though they may not necessarily agree with him on the issues. Of course, as Baris notes, this is exactly why this story was so damaging.

“Obviously, voters might say his integrity is very much in question now.”

Friend, Colleague Reflects On Life Of Steven Sotloff, Pleas Not To Let Death Be In Vain