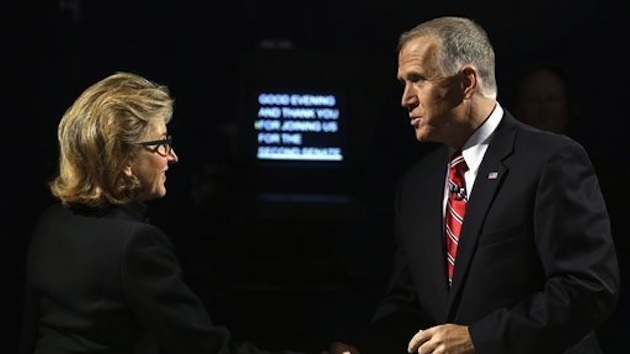 Democratic Sen. Kay Hagan and Republican challenger Thom Tillis met for their second debate at the University of North Carolina Television studios. The issues debated were widespread, including the spread of the Ebola virus to the rise of the threat from the Islamic State in Iraq and Syria.

No less than ten times did Tillis mention that Hagan — a first-term senator who has yet to sponsor a single bill — voted with Obama 96 percent of the time. President Obama’s approval rating in the state is an average 38.7 percent, with the vast number of undecided voters disapproving of the president’s performance.

On the threat from ISIS, Hagan said Tillis is “spineless on what he would do to take ISIS out.” Tillis, who has been ramping up his attacks against Hagan for supporting Obama’s ill-fated plan to remove U.S. troops from Iraq too quickly, fired back with a criticism heard from most military experts.

“They left and created a vacuum in Iraq and the ISIS terrorists filled it,” he said.

Tillis also hammered Hagan on ObamaCare, noting that she promised the people of North Carolina 24 times that they could keep their health care and doctors if they chose to under the law. However, as has been widely reported, that was simply not true. With the administration unilaterally delaying implementation of the law, the people of the state and the country have yet to realize the full impact of the law.

According to a study from PPD, 145 million Americans had coverage that did not meet the Essential Health Benefit Standards outlined in the bill before it was passed.

Though ObamaCare dominated the first half of the cycle, it is now the deadly Ebola virus making headlines in health related issues. ABC News anchor George Stephanopoulos, who moderated the debate, brought up the fact Tillis recently called for a travel ban to West African countries in response to containing the Ebola disease threat. Then, he cited the Centers for Disease Control and Prevention director, who has said that plan would be counterproductive.

“I know the CDC is working hard,” Tillis said. “I don’t know that they’re working smart.”

Most Americans disagree with the CDC director and the majority of Democrats who back Obama’s plan. Tillis said a travel ban would give experts time to make sure the disease doesn’t spread further.

“Until the CDC can convince me we’re able to intervene … then we’ve got to prevent them from traveling there,” he added.

On the issue of gay marriage, Tillis defended the plan by him and Senate leader Phil Berger support the voters of North Carolina, who recently and overwhelmingly approved a constitutional amendment that banned gay marriage.

“I feel it’s my responsibility, after 60 percent of the people voted that into law, to defend the laws of the state,” Tillis said.

On Thursday, Libertarian Sean Haugh will participate with Hagan and Tillis in the third and last general election debate at the WECT-TV studios in Wilmington, North Carolina. The North Carolina Senate race is currently rated a “Toss-UP” by PPD’s 2014 Senate Map Predictions model.