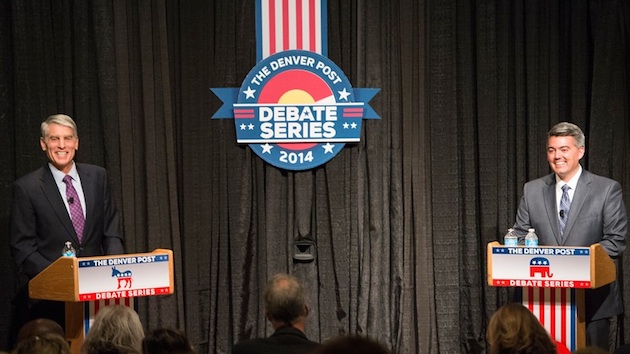 Democratic Sen. Mark Udall and Republican Rep. Cory Gardner spent most of the Colorado Senate debate “dodging questions and blurring each other’s record,” as the Denver Post put it. For the vulnerable Udall, it was another chance to tie Gardner to a host of attacks aimed to earn back women’s support, while Garnder used the floor to remind voters that Udall has voted to support President Obama 99 percent of the time.

“It’s simply outrageous to believe that someone would try to ban birth control,” Gardner said to blunt the attack on women’s issues. Meanwhile, Udall said he just wanted “to remind Congressman Gardner he’s running against me, not Barack Obama, not my father, not Harry Reid.”

The body language dynamic between the two candidates was noteworthy. Udall made an effort to point at Gardner during his attacks, but he refused to turn his head to look at his challenger, making the effort to seem aggressive appear half-hearted and unnatural. On the other hand, Gardner was more dominant, seemingly unafraid of his opponent as he faced him directly in his attack delivery.

The dynamic the Colorado Senate race has changed dramatically since the National Journal released a May, 2013, article entitled, “Colorado’s Forgotten Senate Race.” Since the disastrous rollout of ObamaCare, Colorado voters have consistently reported low approval ratings for incumbent Sen. Mark Udall, as well as President Obama.

Gardner is only a 56 percent favorite, but that was just enough to put this race into the “Leans Republican” corner for the first time this cycle in September.

Gov. Bobby Jindal: This Is 'America That President Obama Wanted To Create'