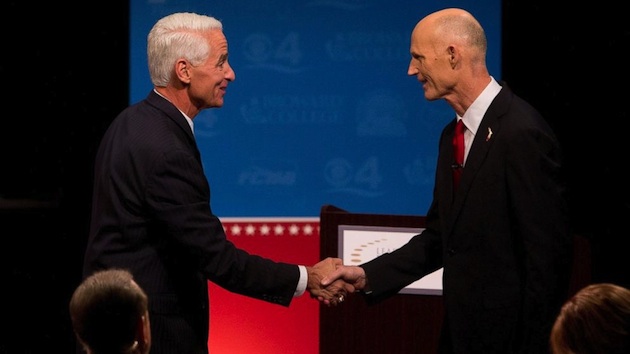 After getting off to an incredible odd start that involved an electric fan underneath former governor Charlie Crist’s podium, the Florida governor debate got underway Wednesday night.

For weeks, the National Rifle Association and has charged Crist with reversing his position on the Second Amendment and, last night, he pretty much confirmed he is for stricter gun laws.

“Everyone believes in that American premise and it is the right thing to do to defend yourself and your property,” Crist said. “But when it gets to the point where you have a statute on the books that allows the instigator … to end up killing another human being after they started the incident, there is something fundamentally wrong with that law.”

George Zimmerman was of course aquitted when it became clear that Trayvon Martin was the aggressor. Polls show an overwhelming number of Floridians believed the law worked as intended.

Gov. Rick Scott said Martin’s death was tragic, but the law should remain as is.

“I believe in the right to defend yourself. I can’t imagine losing a child like that but I have talked to sheriffs and police chiefs,” Scott said. “I stand with them that we need to have the existing law in place.”

Gov. Scott commissioned a panel after the shooting that found the law wasn’t racially bias and, in fact, was actually used as a defense more successfully by non-whites than whites.

“Charlie is the zero-wage governor: 832,000 people went from wages to zero wages when Charlie was governor,” Scott said.

“Rick, there you go again, trying to blame the global economic meltdown on me. It is unbelievable that he would continue to say that, but he says it. And he also says he created all these new jobs all by himself,” said Crist. “You just can’t trust Rick. And it’s sad. It’s unfortunate.”

It was also unfortunate that the former governor broke the rules by putting a small fan beneath his podium, which the governor used as an excuse for delaying the debate. For the record, Crist wanted the fan because he was concerned about repeating a display during his debate with now-Florida Sen. Marco Rubio, or sweating when confronted over his changing positions.

Joe Biden's Son Booted From Navy For Cocaine Use