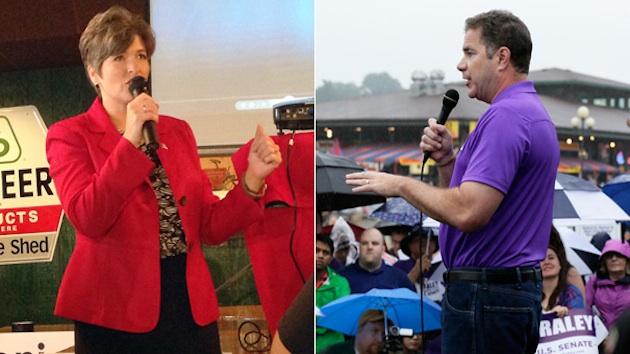 PPD projects Republican Joni Ernst will win the Iowa Senate race outright, giving the GOP a majority outright in the U.S. Senate for the first time since they lost it in 2006. Ernst is the first women ever to be elected to the U.S. Senate in the state of Iowa.

As the returns came pouring in, Democratic Rep. Bruce Braley saw his supporters leaving the headquarters and heading for the cash bar. Braley made a huge mistake belittling Iowa Senator Chuck Grassley as a lowly farmer.

The soon-to-be former Majority Leader Harry Reid said Saturday on a conference call with progressive groups in Iowa that the state would decide the balance of power in the Senate, urging Iowa Democrats “to double down and save the Senate.”

“If we win Iowa, we’re going to do just fine,” Reid said. “Iowa is critical, there’s no other way to say it.”

He was certainly right.

Braley’s missteps have done much to shape the state of this race. He was caught on video belittling Iowa farmers by attacking Iowa’s favorite senator, Republican Sen. Chuck Grassley. Then, in an attempt to answer a voter’s question on the comment, he falsely claimed to be a farmer, which again, was caught on video.

Braley had also missed the majority of his Veterans Affairs Committee hearings, which the poll shows hurt him almost as much as the comment about Grassley.

In every election projection model — save for ours at PPD — Braley was considered the early favorite in the race that clearly slipped away from Democrats. PPD early and repeatedly argued that Iowans favored a Republican-controlled Senate, agreed with the GOP on the issues, and had a severe case of voters’ remorse with President Obama.