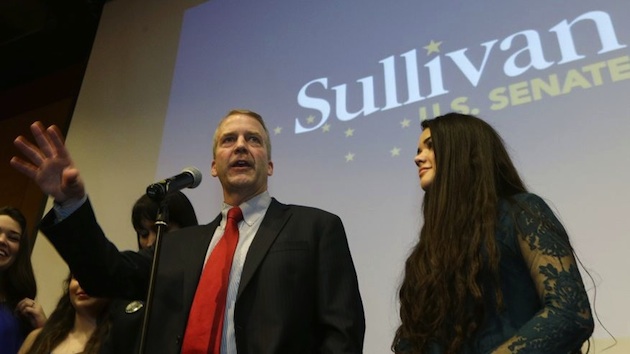 A ninth net gain is likely in the Louisiana Senate runoff on December 6. Democrat Sen. Mary Landrieu grossly underperformed on Election Day and Republican Bill Cassidy was running far ahead of his support in what were terribly inaccurate polls. Democratic sources say the DNCC is bailing on her campaign, sensing inevitable loss.

Sullivan ran a campaign on his own terms, ignoring the debate schedule Begich laid out. The Democrat was somewhat successful at localizing the race in a national environment favorable to the GOP, but blew it when he ran what was a widely denounced ad blaming the then-state attorney Dan Sullivan for the early release of a rapist-murderer.

The ad highlighted the case involving 25-year-old Jerry Active, who is charged with murdering the victim’s two grandparents and the sexual assault of their two-year-old granddaughter.

Sullivan ran against the expansion of the federal government under Obama’s tenure, and Begich’s support of that agenda, including their opposition to energy independence and expansion.

PPD maintained on Election Day that Begich had no viable path to defeat Sullivan, and as officials began to count absentee ballots it became clear that Sullivan maintained a 8,100 vote advantage — which is large for Alaska — over Begich.

Sullivan won the nomination in a hard-fought, three-way GOP primary against 2010 nominee Joe Miller, who came in second despite the erroneous polling, and Lt. Gov. Mead Treadwell.

Sullivan had the backing of both the GOP establishment and conservative outside groups, including The Club For Growth, a pro-fiscal sanity and free market group.

“Senator-elect Dan Sullivan will be an excellent addition to the pro-growth caucus and the Club for Growth PAC was honored to support his campaign,” said Club for Growth President Chris Chocola. “Dan Sullivan will get results for America just as he got results for Alaska – by rolling up his sleeves and fighting for pro-growth policies. Dan knows the fight for economic freedom has just begun, and we can’t wait to see what he can do in the United States Senate.”

Club’s Super-PAC, spent nearly $150,000 on independent ads to help elect Dan to the Senate, and the Club’s PAC bundled $559,137 directly to Dan’s campaign from Club members.