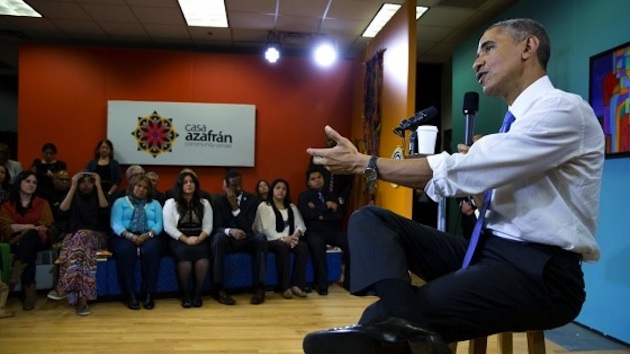 President Obama in Nashville spoke his recent executive order on immigration, but Wednesday 7 more states joined the lawsuit against the unilateral order, bring the total number to 24. The president’s message attempted to convince the audience, who were mostly composed of activists, that undocumented workers are no different from most Americans.

But now half of the country is united against the order that would grant roughly 5 million illegals legal status, a development that comes just a week after the Republican-controlled House voted to strip the order.

“More than 20 states have joined our challenge against the president’s unilateral executive action to bypass Congress and rewrite immigration laws,” said the man who is leading the lawsuit, Texas Attorney General and Gov.-elect Greg Abbott. “The president’s proposed executive decree violates the U.S. Constitution and federal law, circumvents the will of the American people and is an affront to the families and individuals who follow our laws to legally immigrate to the United States.”

Despite the president’s message, clearly many Americans believe the U.S. Constitution is too important to compromise. Yet, the president made his case in Tennessee Tuesday.

“They are us,” Obama said. “They work as teachers in our schools, doctors in our hospitals, police officers in our neighborhoods. They start small businesses at a faster rate than many native-born Americans. They create jobs making this city more prosperous, and a more innovative place.

Unfortunately, data from the president’s own administration doesn’t back up that assessment. In 2011, which is the latest data available, the Social Security Administration found that — out of the alleged 11 million illegal immigrants in the U.S. at the time — just 3 million had ever paid anything into federal taxes.

Meanwhile, U.S. District Judge Andrew Hanen Monday was assigned to hear the legal challenge. Judge Hanen, who was appointed to the bench in 2002 by President Bush, said the Obama administration was involved in the “criminal conspiracy” involving defendant Mirtha Veronica Nava-Martinez, a mother who paid $6,000 to smuggle her child from El Salvador to Virginia.

Under Obama’s direction, the Department of Homeland Security actually notified the mother after Border Patrol agents caught her daughter at the border and arranged for the child to be delivered to her at taxpayer expense, “thus successfully completing the mission of the criminal conspiracy.”

“[DHS] did not arrest her. It did not even initiate deportation proceedings against her,” Judge Haden wrote. “This DHS policy is a dangerous course of action.”

This is the fourth case with the same factual situation this court has had in as many weeks. … The DHS is rewarding criminal conduct instead of enforcing the current laws. More troubling, the DHS is encouraging parents to jeopardize the safety of their children. … Those who hear that they should not fear prosecution or deportation will not hesitate, and obviously have not hesitated, to act likewise.

“If they persist in this policy, more children are going to be harmed, and DHS will be partly responsible because it encourages this kind of Russian roulette,” Haden wrote, noting that that the number of unaccompanied alien children rose 81 percent under Obama’s tenure.