HomeNewsPoliticsObama’s ‘Hopeful’ Islamic Attacks Are Over, But Real Hope Is A New President

Obama’s ‘Hopeful’ Islamic Attacks Are Over, But Real Hope Is A New President 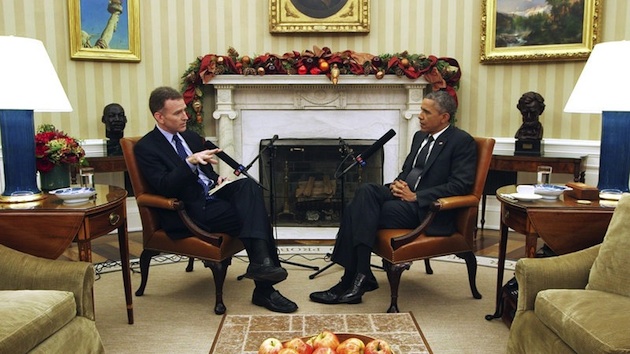 So President Obama’s “hopeful” the violence in France has ended. In a recent address, the White House chief told the world that he was “hopeful the immediate threat” from the terrorist attacks that left more than a dozen Charlie Hebdo staffers, police and hostages dead, and that sent the city into terrified lockdown, had been “resolved.”

Well, Mr. President, we’d like to be “hopeful,” too – but we’re not holding breath. That’s because the White House, with the eyes of the world watching, seems once again to have headed into campaign mode and issued generic, flowery statements aimed at appeasing the very terrorists who want to kill us. By all means, let’s not call the spade a spade – an Islamic terrorist, an Islamic terrorist.

This, from Jane Hartley, U.S. ambassador to France and Monaco, who wrote in Le Monde: “[T]he United States has shared with France an abiding belief that freedom of expression is not the window dressing of democracy, but rather a universal right and a fundamental value, along with freedom of religion. … Americans stand in solidarity with the victims of these senseless attacks, their families and with the people of France: Today we are all Charlie Hebdo.”

What’s next – a Twitter handle from the White House, #WeAreCharlieHebdo, a la first lady Michelle Obama’s similar social media reach-out after the Islamist abduction of Nigerian girls? A mass hand-holding and sing-a-long in the streets of Paris, headed by Secretary of State John Kerry – who assured reporters at the State Department that freedom of speech and expression wouldn’t be killed “by this act of terror?”

The tough-talk grows thin. With Team Obama, we’ve heard it all before. In April, 2009, North Korea defied America and the world by sending a satellite into orbit. Obama issued a tough statement, slamming the regime for its “provocative act.” A month later, North Korea defied international warnings to conduct an underground nuclear test – its second time doing so. Obama’s reaction? He “strongly condemn[ed]” the test and vowed to work with America’s allies to “stand up to this behavior,” he said. Jump over to Syria, and Obama proved himself similarly weak, setting a so-called red line for America to get involved militarily – if President Bashar Assad was proved to have used chemical weapons on his own people – and then pulling back from that vow after said proof was given.

Adding further embarrassment: Obama’s weak-kneed blunders actually opened the doors for Russia’s Vladimir Putin to flex his leadership muscles and capture the public relations ground by acting as the third party to take control of Assad’s chemical stocks – the same chemical stocks that Obama couldn’t even get Assad to admit owning, never mind using. And how ‘bout those Iranians? The dance of Iran’s denial – nuclear weapon program? What nuclear weapon program? – and America’s scolding, chiding and sanction treatment has been going on for years. The latest is Obama penned a letter – no doubt, a stern one – to Iran’s Supreme Leader Ali Khamenei, the contents of which are unknown.

Are we supposed to feel better with that?

Calling this administration weak on leadership – and especially on foreign policy – is an understatement. That’s because the terrorists of the world have been paying attention, and they’re finding the White House ineptitude and reluctance to act a real boon for business. Unfortunately, Obama’s not likely to change any time soon. That means the best chance to turn back the Islamic onslaught – the most hopeful option – is to hold out for 2016 and the next presidential election.

Cherly Chumley, a full-time news writer with The Washington Times, is also the author of Police State USA: How Orwell’s Nightmare is Becoming Our Reality, available at Amazon and Barnes & Noble. To learn more about Cheryl, visit her website.

Judge Jeanine: 'We Need To Kill Them, It Is Time For This To Be Over!