HomeNewsPoliticsJudge Jeanine: ‘We Need To Kill Them, It Is Time For This To Be Over!

Judge Jeanine: ‘We Need To Kill Them, It Is Time For This To Be Over! 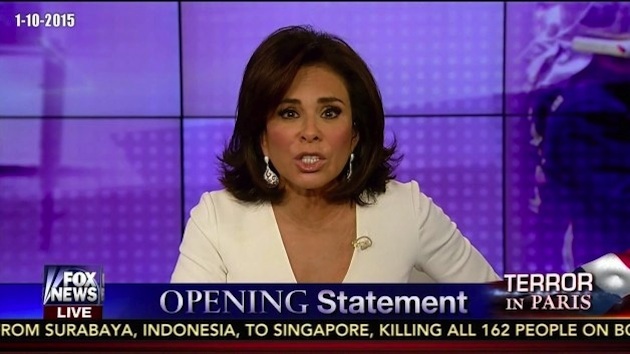 “It is time for this to be over!” Judge Jeanine Pirro said Saturday night in her Opening Statement in response to the radical Islamic terrorist attacks in Paris.

Though three suspects in the attacks on Charlie Hebdo and a Jewish kosher deli are dead, at least one is still at large. However, the judge said the West has been going about it all wrong, respecting the defeat of radical Islam.

“After this week’s brutal terror attacks in France, hopefully everybody now gets it,” Judge Jeanine said. “And there’s only one group that can stop this war: the Muslims themselves.”

Pirro slammed the U.S. for sending foreign aid to countries that don’t cooperate, or worse, help foster radicalism in their countries, and single-out a few in particular.

“Our job is to arm those Muslims to the teeth. Give them everything they need to take out these Islamic fanatics,” she said. “Let them do the job. Let them have at it. And as they do, we need to simply look the other way. It is time for this to be over and stop sending American dollars to any Arab country that does not support this mission, Pakistan at the top of the list.”

Force Arab nations to choose. They’re either with us or they’re against us. And stop with this nuclear negotiation nonsense. They don’t operate the way we do. You can’t negotiate. You can’t mediate. You can’t bargain. You can’t even reason with these people!

Now, Egyptian President el-Sisi – a Muslim in a country 85-percent Muslim – rid Egypt – the largest Arab country – of Islamic fanatics. He threw out Hamas terrorists and outlawed the Muslim Brotherhood, the mother of all terrorist organizations.

And ironically, days before the attack in France that same President el-Sisi called for a religious revolution to take out violent jihadists. He called on the imams and the religious establishment to lead the fight, saying the entire world is waiting for their next move.

I’ve been telling you for a year that they’re coming for us. That there is a reverse crusade in progress, a Christian genocide. Hundreds of thousands of innocents killed in the Middle East.

Seven months ago, I said that we needed to bomb ISIS as it began to steamroll through Iraq. Bomb them. Bomb them. And bomb them again. For which, I was roundly criticized.

Our country’s response to this threat? The FBI destroys tens of thousands of documents deemed offensive to Islam. The CIA removes the word “Islamic” before terrorist in the Benghazi talking points. The Ft. Hood massacre, the Oklahoma beheading, both workplace violence. Are we morons?

Of course, none of this should be a surprise given that our president invited the Muslim Brotherhood to fill the first two rows of his “apology for being an American speech” in Cairo in 2009.

And as we cower to these Islamic fanatics, our president and former Secretary of State Clinton say they will prosecute the man who made the video – free speech be damned!

They call murders accompanied by “Allah Akbar” workplace violence. This surrender is nothing more than a coward’s response to the fear of this fanatical terrorism. And this political correctness will be the death of us.

They can kill us, but we can’t hurt their feelings? I’m surprised there isn’t a new executive order that simply says “don’t offend Muslims”.

And make no mistake – as sure as I’m talking to you – there will be efforts to limit our First Amendment – our free speech – to comply with Sharia blasphemy laws which call for death to those who slander the prophet Mohammad.

At a time when we have never been in more danger, our president is focused on free community college on his continuing his march to reduce the size of the military and eviscerate our national security.

Our government’s response to the terror threat is to have interfaith dialogue, to try to understand and empathize with our enemy. And when they want to shut us up, they call us “Islamaphobes.”

Muslim groups like CAIR and the Nation of Islam have been integrated into our society. Muslims were even invited to worship at the national cathedral in Washington, DC.

We are directed by a political correctness so bizarre so disconnected from reality that it does nothing but assist our enemy in our own destruction.

Now he Prime Minister of France – just a few hours ago – stated that France is at war with radical Islam. Why can’t our president even say the words “radical Islam” or “Islamic terrorists” – let alone protect us Americans.

It’s not like we haven’t suffered from these fanatical terrorists. Thousands of Americans have died at their hands: the World Trade Center, U.S.S. Cole., Tanzania, Ft. Hood, Benghazi.

When the head of MI5 – one of the most secretive positions – shows his face to the world saying that Britain is going to get hit next , it is time to get serious.

And as this Islamic cancer metastasizes throughout the world – Boko Haram in Nigeria, Al-Shabaab in Somalia, Ansar al-Sharia in Libya, Al Qaeda, ISIS – and as it goes through Europe, it is headed our way.

Our forefathers gave up everything, their fortunes, their families, their lives to create a government where free speech and freedom of religion were sacrosanct.

This surrender, this refusal to call it what it is is an insult to my father, my grandfather and everyone who served in armed forces, who fought to protect what is sacred to every American.

Yes, it is time for this to be over.

Obama’s 'Hopeful' Islamic Attacks Are Over, But Real Hope Is A New President