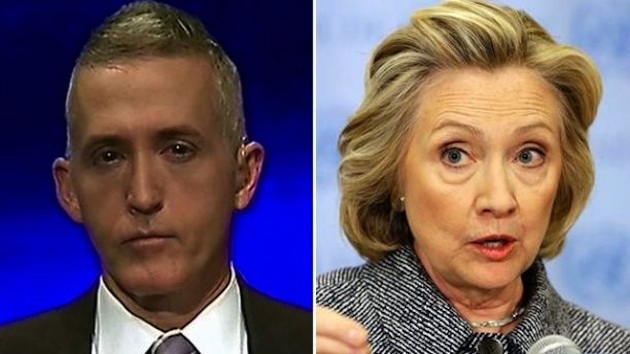 The House Select Committee on Benghazi has extended the deadline for former Secretary of State Hillary Clinton to turn over any emails related to the terror attack.

Rep. Trey Gowdy, R-S.C., the committee’s chairman, had given Clinton until this past Friday to respond to a subpoena of documents held in her private e-mail server. However, committee spokesman Jamal Ware said that the deadline had been extended by two weeks to March 27.

“Chairman ‎Gowdy granted a reasonable extension because for him this is not about politics, it is about getting all relevant documents for the Committee,” Ware said in a statement late Monday. “He still believes the best option for Secretary Clinton is to turn over her server to a neutral arbiter to independently determine what should be in the public domain. The Committee has no interest in her personal emails.”

Chairman Gowdy said Sunday that the House will issue a subpoena for the server itself if need be, because her aides did not have the right to “decide what’s personal and what’s public.”

“But who gets to decide what’s personal and what’s public?” Gowdy noted “And if it’s a mixed-use e-mail and lots of e-mails we get in life are both personal and some work, I just can’t trust her lawyers to make the determination that the public is getting everything they’re entitled to.”

Clinton has come under heavy fire since a revelation earlier this month showed she conducted all her State Department business on a private e-mail address run on a so-called “home-brew” server registered to her New York home. Her aids then decided to determine what was and was not private versus public, and deleted those they themselves deemed private.

A Clinton spokesman attempted to clarify the process late Sunday, stating that members of her staff read “every e-mail” from that account before turning over more than 30,000 messages to the State Department to comply with federal record-keeping rules.

However, nearly 32,000 emails (over half) were deemed private, and were subsequently deleted.

The State Department has said that it has already turned over all official correspondence related to the Benghazi attack to the committee, which consists thus far of approximately 300 messages.

Yet, Mrs. Clinton’s role the night of the attack remains very much in question, as does her honesty to the victims’ families in the days after. The Sept. 11, 2012 attack on the U.S. Consulate in the Libyan city resulted in the deaths of four people, including U.S. Ambassador Chris Stevens, State Department employee Sean Smith, and security contractors Tyrone Woods and Glen Doherty.

Recently uncovered emails obtained by Judicial Watch and first covered by PPD reveal Clinton’s top aides always knew the Benghazi mission compound was under attack from a terrorist group, and Clinton herself lied to the victims’ families.  The documents, which were obtained as a result of a Freedom of Information Act lawsuit against the State Department, make no reference to a spontaneous demonstration or Internet video.

More than suspiciously, not a single email to or from Secretary Clinton was released in the timeline thread from the FOIA request.