On The Flat Tax, Is The IRS Boss Right And Ted Cruz Wrong?!? 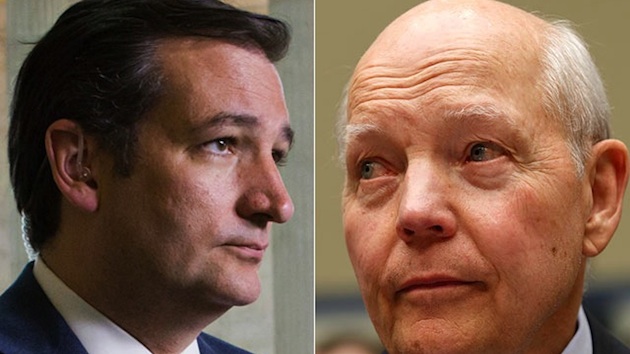 I’m not a fan of the IRS or it’s Commissioner, a partisan Democrat named John Koskinen. The agency has become politicized, interfering with America’s political process. Needless to say, I’m not shedding tears that the bureaucracy is no longer getting big budget increases.

By contrast, I oftentimes applaud Senator Ted Cruz. His shutdown fight against Obamacare was a net plus. He was one of the few 2016 candidates who took a strong stand against cronyism in Iowa. And he manages to retain a sense of humor in the fight against big government.

So it’s with considerable chagrin that I feel compelled to admit that IRS boss made a good point, at least from a technical perspective, when he criticized Senator Cruz on the topic of the flat tax.

Here’s the background. A story in Bloomberg quotes Senator Cruz about his goal for tax reform.

“Instead of a tax code that crushes innovation, that imposes burdens on families struggling to make ends meet, imagine a simple flat tax that lets every American fill out his or her taxes on a post card. Imagine abolishing the IRS,” Cruz said.

Now here’s an excerpt from a Politico report about Mr. Koskinen’s response.

IRS Commissioner John Koskinen poked holes in Republican presidential candidate Ted Cruz’s plan to abolish the IRS and create a simple flat tax so taxpayers could file their taxes on a postcard. Koskinen pointed out that even if taxpayers were to file their taxes on “a small card,” someone would have to collect the money and make sure the numbers filled out are actually correct. “You can call [tax collectors] something else than the IRS if that makes you feel better, but basically someone has to follow through on all of that,” Koskinen told reporters today after a speech at the National Press Club.

Koskinen is right. So long as the federal government intends to extract more than $3 trillion from taxpayers, there will be a tax-collection agency. That’s true even if you have a flat tax or a national sales tax.

Sure, you can rename the IRS, or even require states to collect the revenue instead, but none of that changes the fact that some coercive body will exist to take our money.

That being said, Cruz’s overall point surely is correct. The IRS in a flat tax world would be largely de-fanged. Indeed, the Tax Foundation estimated several years ago that compliance costs would drop by more than 94 percent if we replaced the internal revenue code with a flat tax. And, as pointed out in this video, the tax code today is even more complex, so the savings now presumably would be even larger.

So Koskinen may be technically correct, but only because he is focusing the conversation on the narrow issue of whether government will still have a tax-enforcement body.

But Cruz is correct on the big-picture issue of whether the IRS as it exists today will no longer exist.

Since we’re on the topic of tax reform, Amity Shlaes and Matthew Denhart, both with the Calvin Coolidge Presidential Foundation, have a column in today’s Wall Street Journal that is somewhat critical of the Rubio-Lee tax reform plan.

Signaling opportunity throughout the tax code has long been the basis of the philosophy known as supply-side economics, or “Reaganomics.” Reaganomics treats even individual wage earners as entrepreneurs. The marginal rate to which a worker is subject under the progressive tax schedule is crucial. A higher rate on the next dollar a worker earns discourages him from working more. The highest tax bracket is especially important as top earners produce the most and innovate the most. …That top marginal rate also functions as a symbol of how society rewards enterprise.

…on the personal side their proposal drops the top marginal rate on individual income by a puny 4.6 percentage points, to 35% from 39.6%. …What’s more, Rubio-Lee lowers tax thresholds drastically. Singles with taxable income as low as $75,000 find themselves entering the 35% top bracket; for couples the top rate applies after $150,000. Currently, individuals don’t hit the 35% bracket until $411,501, and the same holds for couples.

So why aren’t there big reductions in tax rates for households to match the very good reforms for businesses? The answer, at least in part, is that “Rubio-Lee also raises the child credit” and this consumes a lot of money, in effect crowding out lower marginal tax rates.

As a result, you get big economic benefits from the reforms to business taxation, but the child credits don’t have any impact on incentives to create wealth, expand jobs, or boost income.

The nonpartisan Tax Foundation recently estimated that Rubio-Lee would increase economic growth so that by 2025 the economy would be 15% larger than otherwise, almost entirely due to business tax cuts. The effect of the child credit on growth is reckoned at zero.

But imagine if Rubio-Lee took their good tax reform plan and made it better by replacing the child credit with lower rates? And then made it even better by getting rid of additional tax preferences such as the healthcare exclusion?

Shlaes and Denhart quote me in their column as pointing out that if Rubio and Lee made their plan into something akin to the flat tax, the tax rate could be under 20 percent.

Dan Mitchell of the Cato Institute notes that if Rubio-Lee dropped all the preferences it contains, old and new, the plan could drop its top income-tax rate to 20% or lower.

I confess that I don’t have up-to-date estimates to confirm my assertion, but the Clinton Treasury Department back in 1996 estimated that the flat tax rate in a revenue-neutral world would be 20.8 percent.

But since the Rubio-Lee plan is a very large tax cut, amounting to more than $4 trillion over 10 years, combining that amount of tax relief with the flat tax surely would allow the rate to be well below 20 percent.

By the way, none of this should be interpreted to suggest that Rubio-Lee is bad tax policy. It’s a huge improvement over the current system. As I wrote last month, it’s a very good tax reform plan. It is especially good about fixing some of the worst features of the current tax code, such as worldwide taxation,depreciation, and double taxation.

But that doesn’t mean it is as good as the flat tax, which does everything good in Rubio-Lee, but also has a low rate for households and fewer tax preferences.