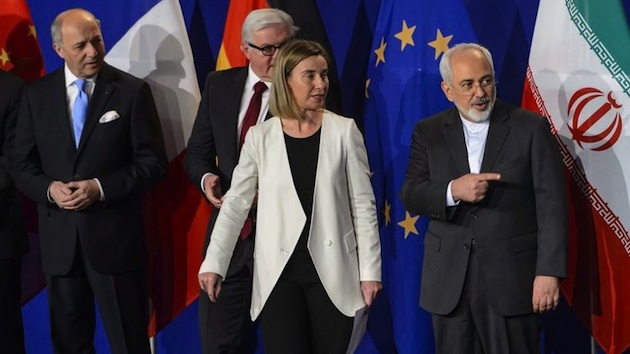 The details of the Iran nuclear deal remain elusive, but what we do know isn’t being truthfully conveyed to the American people by President Obama, or the media (including FOX). The Obama administration gave us all in the media a “fact sheet” shortly before the president’s press conference, which claimed victory on a host of issues that are either spun to be misleading, at best, or flat-out lies.

The solutions are good for all, as they stand. There is no need to spin using "fact sheets" so early on.

He didn’t stop there. Let’s take a look at one of the most controversial issues — and the one that is perhaps surrounded by the most deception — which the Iranian foreign minister exposed.

Iran/5+1 Statement: "US will cease the application of ALL nuclear-related secondary economic and financial sanctions." Is this gradual?

The administration previously and repeatedly argued that the economic sanctions were not completely dismantled, nor would they be until it was verified that Iran had stopped pursuing a bomb. And they did so again Thursday, while the media regurgitated the narrative.

Sadly, the Iranian foreign minister is being more truthful to the American people and the world than the United States government, and the state-run media outlets.

Iran/P5+1 Statement: "The EU will TERMINATE the implementation of ALL nuclear-related economic and financial sanctions". How about this?

The language of the agreed upon statement explicitly states the EU will immediately terminate sanctions, while the U.S. sanctions are a bit more vague. It reads as follows:

The European Union will terminate the implementation of all nuclear-related economic and financial sanctions and the United States will cease the application of all nuclear-related secondary economic and financial sanctions simultaneously with the IAEA-verified implementation by Iran of its key nuclear commitments.

However, the very next statement agrees to terminate all previous resolutions regarding sanctions on the regime in Tehran as a response to their nuclear program. It reads as follows:

A new UN Security Council resolution will endorse the JCPOA, terminate all previous nuclear-related resolutions, and incorporate certain restrictive measures for a mutually agreed period of time. We will now work to write the text of a joint comprehensive plan of action including its technical details in the coming weeks and months at the political and experts level. We are committed to complete our efforts by June 30.

Clearly, all bets are off on Iran’s end if the U.S. does not drop their previously installed sanctions. So, this would appear to be a clear CYA that allows the administration to claim a falsehood.

On the issue of current enrichment facilities and locations, sadly, there just isn’t enough to draw a serious conclusion. Considering the administration’s lack of truthfulness in the past on this and a host of other issues, it is wise for the American people to hold tight to their skepticism.

The agreement centers on the facilities in Arak and Natanz, the latter of the two will still spin some 6,000-plus centrifuges. Arak will not produce weapons-grade plutonium, anymore, and will be converted into a modernized heavy water research reactor with the help of the international community.

What is to stop Iran from taking Western technology and then tossing out inspectors from the International Atomic Energy Agency?

“The International Atomic Energy Agency will be permitted the use of modern technologies and will have announced access through agreed procedures including to clarify past and present issues,” the statement reads. “Iran will take part in international cooperation in the field of civilian nuclear energy which can include supply of power and research reactors. Another important area of cooperation will be in the field of nuclear safety and security.”

Not to be a bubble-burster to those celebrating the framework of the Iran nuclear deal, but this mirrors their past obligation that they did not follow in the first place, which led to the economic sanction imposition that no longer stands. Of course, the same sanction imposition that got them to the table in the first place, is no longer a threat to them. They have successfully legitimized a long-time delegitimate nuclear program that is more likely than not to set off a nuclear arms race is the least stable region on planet Earth.

Tehran declared another victory yesterday to cheering Shiite militias. Unfortunately, they have reason to celebrate, not us.

And shame on the American media, including the so-called adversarial and conservative news outlet FOX News, for not telling you the truth.

On The Flat Tax, Is The IRS Boss Right And Ted Cruz Wrong?!?