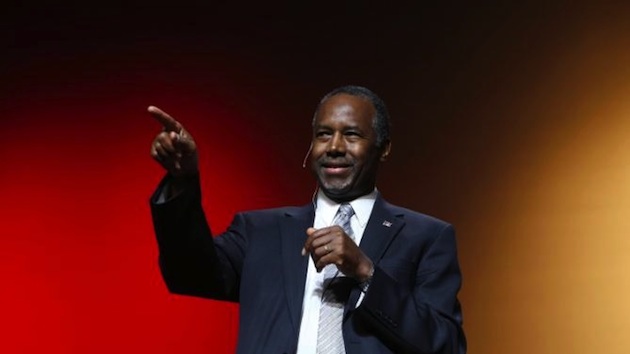 Ben Carson announces his candidacy for president during an official announcement in Detroit, Monday, May 4, 2015. Carson, 63, a retired neurosurgeon, begins the Republican primary as an underdog in a campaign expected to feature several seasoned politicians. (Photo/Paul Sancya)

Dr. Ben Carson, a retired neurosurgeon from humble beginnings, announced in Detroit Monday that he will seek the Republican presidential nomination in 2016.

“I’m Ben Carson and I’m a candidate for president of the United States,” he declared almost immediately to supporters.

Carson rose to national political prominence at the end of his 29-year careet leading the pediatric neurosurgery unit of Johns Hopkins Children’s Center in Baltimore. He directed the first surgery to separate twins connected at the back of the head during a career that inspired the 2009 movie, “Gifted Hands,” with actor Cuba Gooding Jr. depicting Carson.

But, as impressive as the doctor’s career has been, he is not a politician. And, though critics say that makes him untested and unpredictable, he is proud of it.

“I’m not a politician,” he said. “I don’t want to be a politician. Because politicians do what is politically expedient. I want to do what’s right.”

Carson also addressed the charge leveled by some in the media that claimed he wanted to eliminate social welfare programs that his family must have taken advantage of while Dr. Carson was growing up in abject poverty.

Speaking without notes, Dr. Carson told his moving personal story that so often includes his hardworking, yet illiterate mother, who used to make him and his brother write book reports weekly. He praised her work ethic, commitment to educating her children, and her value and appreciation for hard-earned money and its proper management.

“I’m fond of saying that if my mom were secretary of treasury, we wouldn’t be in a deficit situation,” he joked.

Now, with former Florida Gov. Jeb Bush reportedly raising as much as $100 million if not more, and Sen. Ted Cruz raising more than $30 million in the few weeks following his announcement, it remains unclear whether Carson can also raise the funds necessary to be competitive.

Following his retirement in 2013, supporters led by John Philip Sousa IV, the great-grandson of the famous composer, formed a super PAC called the National Draft Ben Carson for President Committee. That group blew away political analysts’ expectations by raising $13.5 million in 2014. That was more than a super PAC set up to draft Hillary Clinton, which raised just $12.9 million. There are also at least three other political action groups now affiliated with Carson, including USA First, One Nation and American Legacy. Though they raised much less than the Draft Carson group, they’ll likely see those numbers increase now that he’s officially in the race.

Yet, from Carson’s speech, it is clear he will run a very different campaign, one that is far more blunt and far less politically correct than those Americans are used to. His speech covered warnings about the left’s “Saul Alinsky 101″ tactics to shame and silence the majority, to economic lessons involving GDP. Dr. Carson said he isn’t asking everyone to vote for him, just to listen to the message.

Donald Trump On Pamela Geller: 'What In The Hell Is She Doing?'