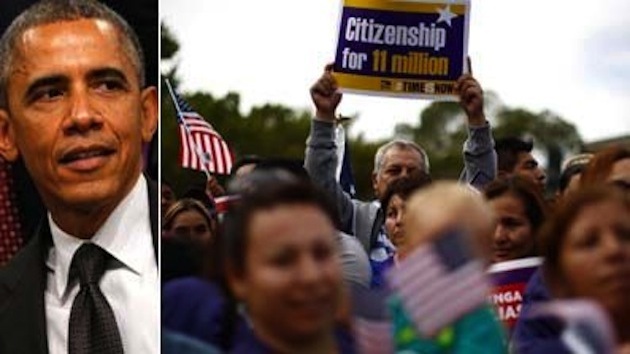 The Obama administration admitted to a federal judge last week that they broke the injunction handed down by Judge Andrew S. Hanen temporarily blocking the president’s executive amnesty by issuing thousands of work permits to illegal immigrants. Now, a report by PJ Media further provides proof Obama’s amnesty order was always about adding new Democrats to the voter rolls.

Despite assurances by top administration officials to the contrary, including from Department of Homeland Security Secretary Jeh Johnson, the United States Citizenship and Immigration Services is reallocating significant resources away from a computer system — known as the “Electronic Immigration System” — in order to send letters to all 9,000,000 green card holders urging them to naturalize prior to the 2016 election.

A newly obtained document (viewable below) written by Leon Rodriguez, the “director and co-chair of the Task Force on New Americans,” details an “integration plan that will advance our nation’s global competitiveness and ensure that the people who live in this country can fully participate in their communities.”

“’Full participation’ is a term commonly used to include voting rights,” says former Justice Department lawyer J. Christian Adams. “To that end, resources within DHS have been redirected toward pushing as many aliens and non-citizens as possible to full citizenship status so they may ‘fully participate’ in the 2016 presidential election.”

In fact, the document does blatantly states that “specific recommendations” aim to “strengthening pathways to citizenship and promoting civic engagement,” otherwise known as naturalization and voting rights.

According to Adams, Mr. Rodriguez has been a controversial and less-than honest central player in the “radicalization of Eric Holder’s Civil Rights Division.” He cites an instance when Rodriguez “undertook a purportedly illegal search” of a government employee’s computer in Montgomery County, Maryland.

Adams said that DHS is not only fast-tracking new green card holders before the 2016 election, but also hunting down previous visa holders to move them to green card status.

Meanwhile, Judge Hanen has been weighing whether to sanction the Justice Department lawyers after they were previously caught misleading him in the case on more than 100,000 amnesty applications approved between the Nov. 20 date Mr. Obama announced the amnesty order and the Feb. 16 date the judge issued the injunction.

However, the latest stunning admission is legally far worse than the previous instance, because it breaks Hanen’s injunction directly.

“The government sincerely regrets these circumstances and is taking immediate steps to remedy these erroneous three-year terms,” the administration lawyers in the brief filed with the court just before midnight Thursday. However, officials also say they will simply reduce the term from three to two years, not undo actions the judge ruled they never had the authority to take.

But that’s not satisfying the chairman of the Senate Judiciary Committee, who said it was “remarkable” that the administration continues to ignore Judge Hanen’s order by approving further applications without the constitutional authority to do so.

“The last time I checked, injunctions are not mere suggestions. They are not optional,” Iowa Sen. Chuck Grassley wrote in a letter to Secretary Johnson. “This disregard for the court’s action is unacceptable and disturbing, especially after Secretary Johnson’s assurances that his agency would honor the injunction.”

Yet, multiple sources at DHS confirmed that President Obama’s political appointees are pushing naturalization ahead of the 2016 presidential election, with the obvious purpose of giving Democrats an electoral edge via millions of new voters in the election. La Raza, an alleged pro-Hispanic civil rights group that translates to “The Race,” as well as the American Immigration Lawyers Association have been playing a central “stakeholders” role in the administration’s immigration policies, both secretively and internally.

“Middle class Hispanics were a key voting bloc that helped propel the Republican Party to its historic wave election in 2014,” says PPD senior political analyst Richard Baris. “As PPD has repeatedly demonstrated through the available data, outreach efforts made by the party and their private supporters paid off in 2014, big time.”

“Democratic strategists are increasingly fearful that the nearly monolithic black coalition, as well as the 2 to 1 support they enjoyed among Hispanic voters in 2012, were an Obama electorate phenomena,” he added. “They believe these margins are unlikely to be repeated by their 2016 nominee and congressional candidates. The significant Republican inroads among minorities in Florida, Nevada, Colorado, Georgia and Virginia, further exacerbated that fear.”