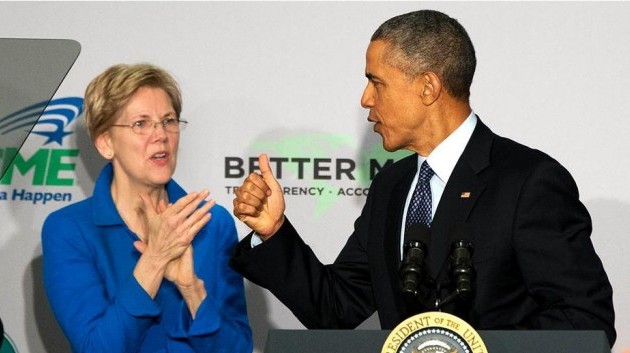 President Obama suffered a lame duck-like defeat Tuesday at the hands of members within his own party in the U.S. Senate, who blocked a key component of his trade agenda. The opposition was led by Sen. Elizabeth Warren, D-Mass., a vocal critic of the trade bill that enjoys otherwise bipartisan support.

With Democrats divided on the issue, intense lobbying on both sides of the issue resulted in the failure of the upper chamber to agree to start debate on expanding the president’s authority to negotiate trade deals. The motion failed on a 52-45 vote, which was not very close considering it needed 60 votes to move forward.

The development is an ironic one, as the rebuke came from members of a party seemingly unconcerned with the vast expansion of presidential powers over the last 6 years. Meanwhile, Republicans, who have lamented that expansion on executive power, were largely aligned with President Obama on the issue of trade.

The major sticky point for Warren and other leftwing Democrats is the push for so-called “fast track” authority, which would grant him the authority to negotiate trade deals that Congress can reject or ratify, but not amend. The legislation would pertain to a broad trade pact with Japan and other Pacific nations.

That is not the only other concern held by many Democrats entrenched in the interests of labor unions. They, the party that brought us NAFTA, say the deal could potentially negatively impact U.S. jobs. Senate Minority Leader Harry Reid, D-Nev., told reporters he’s a “hell no” on the deal when asked recently.

But Warren goes even further in her opposition. Obama and Warren have been publicly at odds over the issue, with the president recently saying Warren’s claims were “absolutely wrong.” She responded in a blog post.

“The Administration says I’m wrong — that there’s nothing to worry about,” she said in a blog post titled You can’t read this on her website. “They say the deal is nearly done, and they are making a lot of promises about how the deal will affect workers, the environment, and human rights. Promises – but people like you can’t see the actual deal.”

A growing number of Democrats chastised Obama for criticizing Warren, which he did most recently in an interview with Yahoo News. Democratic senators, who now in the minority have sought to block more centrist motions than they credited the GOP for prior to 2014, said they are opposed to the Democratic president making deals with Republicans on trade.

With a 54-seat Republican majority in the Senate, the administration needed just 6 Democrats to come on board. However, the labor union lobby, liberal groups and others oppose the legislation, leaving Democrats paralyzed and unable to vote for “poison pill” amendments. The president has no such concerns now that he will never face the voters again.

Obama and congressional Republicans have argued that U.S. goods and services need better access to the 95 percent of world consumers who live in other countries. If Obama can ultimately get the trade measure passed, which he will attempt again to do immediately, he will no doubt try to use that political victory as leverage to ask Congress to approve the Trans-Pacific Partnership being negotiated with 11 other countries, including Japan, Vietnam, Canada and Mexico. Other free-trade proposals could follow.

Yet, the question remains if he has much capital left, at all. While it is true that a number of Democrats say they will back fast track only if Republican leaders clear a path for three other trade measures, including the African Growth and Opportunity Act, the Trade Adjustment Assistance amendment, which provides federal aid to workers displaced by trade agreements, remains controversial. Republicans largely oppose it, but may swallow the bitter bill in exchange for Democratic support on other amendments on other controversial amendments.

The third bill, which includes Customs enforcement, is one of them. The bill puts in place certain actions against countries that keep their currency artificially low, which grants an unfair competitive advantage regarding exports. President Obama have opposed the “currency manipulation” bill, claiming it could invite international challenges to the Federal Reserve’s policies he believes have given a boost the economy. Loose monetary policy, such as printing trillions in fiat currency, is increasingly unpopular with Republicans, who view Fed policy as having long-term disastrous consequences on the purchasing power of the American worker and a grave threat to the servicing of the national debt.