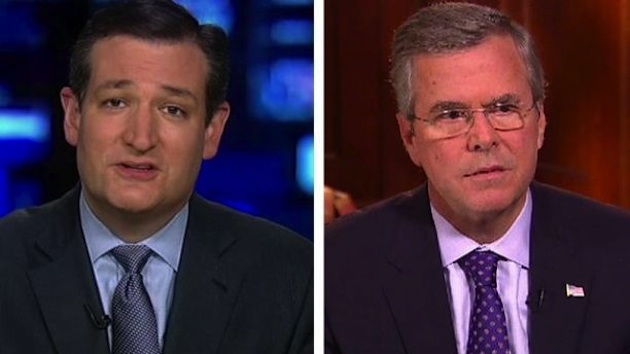 Sen Ted Cruz, R-Texas, responded to an interview former Florida Gov. Jeb Bush did with Megyn Kelly, rebutting his positions on Common Core and immigration. Cruz, who was the first to announce he will seek the Republican nomination and run for president in 2016, credited Bush for his honesty but made clear there were stark differences between him and the 43rd president’s brother.

“You know, look, I’m a fan of Jeb Bush. I’ll give him credit for candor and consistency, he is running based on his views, his views are different from that of a lot of Republican primary voters,” Cruz said. “But he’s honest about it, and I think we’re going to have a clear straight-up debate about what’s the right direction for the Republican Party to go and what’s the right direction for the country to go.”

Those views would include Common Core, immigration and the Iraq War. On two of those issues, immigration and Common Core, Cruz defended his criticisms against both Jeb Bush and Megyn Kelly, who clearly sided or sympathized with the former Florida governor. Kelly challenged Cruz on immigration, stating that Bush’s position “isn’t an amnesty exactly,” though past events and recent developments more than suggest otherwise.

“Well, you know, there are an awful lot of candidates in the 2016 field who have supported amnesty or have gone back and forth on the issue. My position has been consistent and clear. I think amnesty is wrong. I think it is unfair.”

The Texas senator and tea party-backed conservative expanded on his position.

“Well, but if you grant in state tuition to students who are here illegally, that comes at the expense of American citizens or it comes at the expense of legal immigrants who follow the rules to come here, you know, there’s a finite number of slots, and a finite number of dollars,” Cruz said. “And often the people that get left behind in this immigration debate are legal immigrants, are people like my dad who in 1957 fled Cuba, he came on a student visa, came here legally, and I think most American people outside of Washington agree that we need to secure the borders, we need to stop illegal immigration. Amnesty is wrong.”

During the exchange on Common Core, which is growing increasingly unpopular among voters, parents and teachers who demonstrate a greater understand of the policy, Kelly again argued that the former governor was correct in his assertion that education would still be directed at the state and local level.

“But Megyn, that’s not how it works,” Cruz rebutted. “The Obama administration has used race to the top money, federal money to force states to adopt Common Core standards.”

Kelly simply redirected by declaring that “they (states) could bail out if they don’t want to be a part of it,” but didn’t challenge the premise of Cruz’s argument.

“Well, sure, they can, but there are a lot of dollars connected to it,” he pointed out. “And the federal government, you know, it’s sort of like the drug dealer that goes to the junior high and gets a kid hooked by saying, just try it once, the federal government does that to the states with dollars, and there are so many strings attached.”

Despite focusing on the substance of the in-depth policy discussions by both Cruz and Bush, the media has obsessed over one of Bush’s answers regarding the Iraq War. In the context of a hypothetical, Bush said he would have authorized the invasion of Iraq, as well, had he been president during his brother’s tenure.

“I would have. And you know who else would have? Hillary Clinton,” Bush said. However, the media pounced and took it as if he was speaking about the present, or given what we know today. That narrative clearly doesn’t sum up the governor’s position, particularly when considering his final answer.