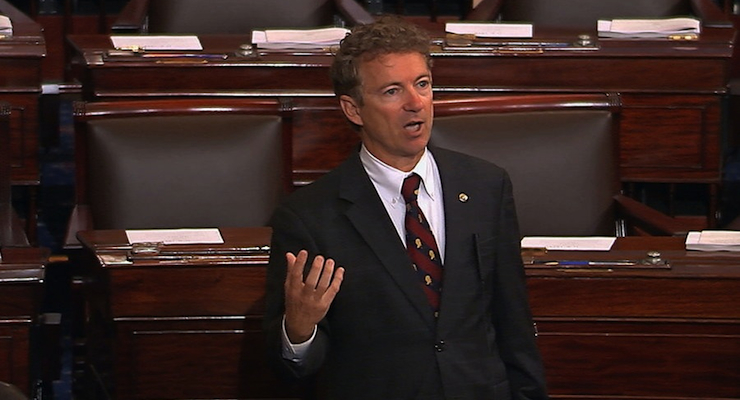 Republican presidential candidate Sen. Rand Paul, R-Kentucky, speaks on the floor of the U.S. Senate on Wednesday May, 20, 2015, at the start of an almost 11-hour speech opposing the wholesale renewal of the Patriot Act. (Photo: Senate video feed)

An internal Justice Department inspector general (IG) report on the controversial Patriot Act appears to vindicate Sen. Rand Paul, R-Kty., who has taken fire from his fellow-2016 presidential hopefuls over his stance against renewal of the bill.

Inspector General Michael E. Horowitz admitted in the 77-page report that the agency could not point to a single major terrorism plot thwarted as a result of the vast expansion of federal spying authority granted in the bill. Horowitz said that between 2004 and 2009, the period when the FBI tripled its use of bulk metadata collection under Section 215 of the Patriot Act, compelling businesses to turn over records and documents on Americans led to a bloated system that revealed no ties to official terrorism investigations.

“The agents we interviewed did not identify any major case developments that resulted from use of the records obtained in response to Section 215 orders,” the inspector general found. “While the expanded scope of these requests can be important uses of Section 215 authority, we believe these expanded uses require continued significant oversight.”

Sen. Rand Paul on Wednesday stood his ground on the floor of the Senate for nearly 11 hours in a filibuster-like speech to argue just that, and chastised the so-called Patriot Act as “the most unpatriotic act” to be passed in recent memory. The libertarian-leaning senator warned Americans and colleagues that we are entering a pivotal period in modern American history when the sacrificing of Fourth Amendment privacy rights in the name of security will lead to neither.

“There comes a time in the history of nations when fear and complacency allow power to accumulate and liberty and privacy to suffer,” the Kentucky senator said at 1:18 p.m. EDT when he took to the Senate floor. “That time is now, and I will not let the Patriot Act, the most unpatriotic of acts, go unchallenged.”

Section 215 of the Patriot Act is set to expire at the end of May. The Republican-dominated House overwhelming passed the USA Freedom Act in a bipartisan vote, a bill that renews provision but also limits the ability of the government to conduct bulk metadata collection seen on the level of the NSA. However, with a significantly higher number neoconservatives and big government-loving Democrats in the Senate, the bill ran into problems.

Majority Leader Mitch McConnell, R-Kty., who is leading the fight to protect the NSA program against his fellow Bluegrass State lawmaker, is doing everything he can to avoid Paul and Co. from being able to garner the 60 votes needed to pass the House bill. He hopes to force them into a choice of either extending Section 215 or allowing the bill to expire. McConnell, and other proponents of the Patriot Act, argue that the bill must be kept intact and without reform.

But opponents of the bill have always been suspicious and critical of the effectiveness of Section 215, believing it to be an ineffective law that throws civil liberties and security into a state of imbalance.

“This report adds to the mounting evidence that Section 215 has done little to protect Americans and should be put to rest,” said American Civil Liberties Union Staff Attorney Alex Abdo.

Stephen Kohn, an attorney at Kohn, Kohn & Colapinto, LLP and advocate for government whistleblowers such as Edward Snowden, who brought the extent of the government’s metadata collection to light, said bulk metadata collection only helps to create false leads that exhaust agency resources and, ultimately, hurts national security.

“They have a large amount of agents who are working counterterrorism that have no human resources, no leads, no infiltrations, so they have nothing else to do,” he said. “In other words, when they staffed up and made [counterterrorism] a major priority, these agents need to do something. And they’re doing what they know to do, and that’s electronic surveillance.”

A request for comment sent to Team Paul 2016 was not immediately answered.