The Denny Hastert Scandal: When Bad Things Happen to Bad People for the Wrong Reasons 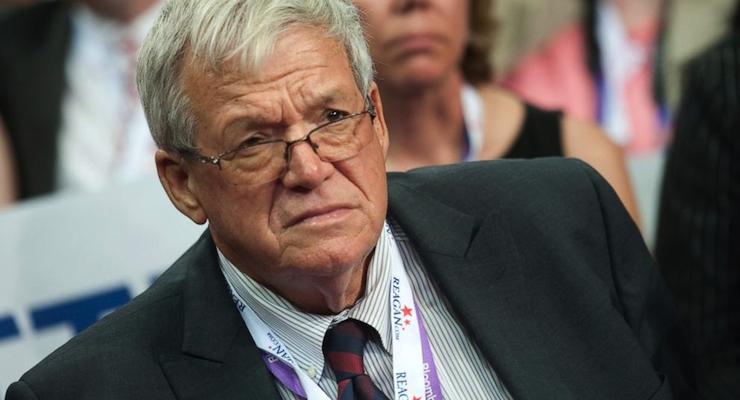 Former Speaker of the House Dennis Hastert, R-Ill., is in the Illinois delegation at the 2012 Republican National Convention at the Tampa Bay Times Forum. (Photo: Getty Images)

I don’t like former House Speaker Dennis “Denny” Hastert. But not because of any personal interactions. I don’t think I’ve every even been in the same room as him, much less ever met him.

But I know that he did nothing to restrain the reckless expansion of government when he had power during the Bush years. Indeed, he fought against those who tried to throw sand in the gears.

So I’ll admit a certain Schadenfreude now that he’s in legal trouble. But I’m also irked. He’s being charged with something that shouldn’t be a crime, while getting (at least so far) a free pass for the bad things that he has done.

As is so often the case, Tim Carney has the right perspective. Here’s some of what he wrote for the Washington Examiner.

If the the stories that have leaked in the media are true, the true sin Hastert committed is unspeakable, but possibly unprosecutable. There is one aspect of the Hastert scandal, however, that reflects a problem that is more troubling than “structuring” bank withdrawals… How in the world could a school-teacher-turned lawmaker afford to pay, reportedly, $3.5 million in hush money?

Hastert monetized his public service into a lucrative lobbying career — largely by increasing government. One telling episode begins in May 2007. Hastert at that time was a chief cosponsor of the “light bulb ban,” the law that effectively outlawed the traditional incandescent bulb, forcing consumers to buy more expensive fluorescent bulbs and LEDs. …in March 2008, Hastert joined Polybrite “as a strategic advisor,” according to a company press release. A year later, after he had joined K Street lobbying firm Dickstein Shapiro, Hastert officially registered as a lobbyist for Polybrite… Hastert’s first lobbying work for Polybrite…was his job to try to get stimulus money for Polybrite.

Hmmm… I wonder is Polybrite was part of the $27 bulb stimulus scandal?

But nanny-state light bulbs are just the tip of the iceberg. Here’s another example.

Ethanol subsidies were another Hastert special. In the first three months of 2015, the ethanol industry lobby group, Fuels America, paid Dickstein Shapiro $60,000 for ethanol-mandate lobbying by Hastert and another lobbyist. All the House members Hastert had rewarded with committee assignments, earmarks and co-sponsorships were now taking phone calls from their former commander on behalf of green-tinted subsidy sucklers. This is part of how Washington turned a school teacher into a millionaire.

In other words, Hastert is a poster child (along with Harry Reid, Bob Dole, and countless others) for the proposition that Washington is basically a giant scam operated for the benefit of insiders who get rich by taking money from earners and producers and giving it to those with political connections.

Which is my message in this video from the Center for Freedom and Prosperity.

But now let’s return to the main topic. Hastert wasn’t charged with being a sleazy insider who used connections to pillage money from taxpayers and steer it to corrupt clients.

Instead, he’s being charged with violating “money laundering” laws that shouldn’t even exist. Here’s some of what Warren Coats (a colleague on the Editorial Board of the Cayman Financial Review) wrote on this topic.

Mr. Hastert is being charged with violating our Anti Money Laundering (AML) laws. These laws allow arresting and convicting people for moving money (as Mr. Hastert was doing) that the government thinks was the proceeds of crime (not the case with Mr. Hastert, his crime was failing to report what he planned to with his money), when they are not able to prove that there was a crime in the first place. As far as I know, paying a blackmailer (which is what Mr. Hastert apparently did) is not a crime, though demanding and receiving such money is. The United States has pushed such legislation and the new bureaucracies needed to enforce it all over the world at the cost of billions and billions of dollars (that could have been used for poverty reduction or other more pressing things) with very little if any benefit to show for it. Charging Dennis Hastert with AML violations is a rare exception. Wow, what a benefit for such intrusions into our private lives. I consider AML laws more than a costly waste of money. They are another expansion of the arbitrary power of governments that can be used for good or ill with limited oversight.

For more information, here’s the video I narrated on why it’s inefficient and intrusive to require banks to spy on their customers.

I suppose the bottom line is that Dennis Hastert is a bad person who did bad things, so he deserves some payback. And that’s exactly what he’s getting.

But I can’t help but wish he was punished for the right reason.

P.S. Like most fans of the New York Yankees, I’m not a big fan of the irrelevant quasi-Major League team on Long Island.

But I confess my allegiances are just an accident of birth, family, and geography.

However, I now have a policy reason to dislike the Mets.

The New York Mets have become the first sports team to join the nationwide anti-gun campaign, aligning with celebrities like Piers Morgan and Chicago Mayor Rahm Emanuel to back today’s National Gun Violence Awareness Day. Sponsored by the Michael Bloomberg-backed Everytown for Gun Safety, people with some 200 organizations are wearing orange to draw attention to the issue. According to the group, the Mets even dressed in orange to show their support.

It’s both amazing and disappointing that there were no real Americans on the team who refused to participate in this attack on the Constitution.

To offset this bad news, here’s some anti-gun control humor to brighten your day.

Meet Team Hillary 2016: Players, Pollsters and Pockets Behind the Campaign