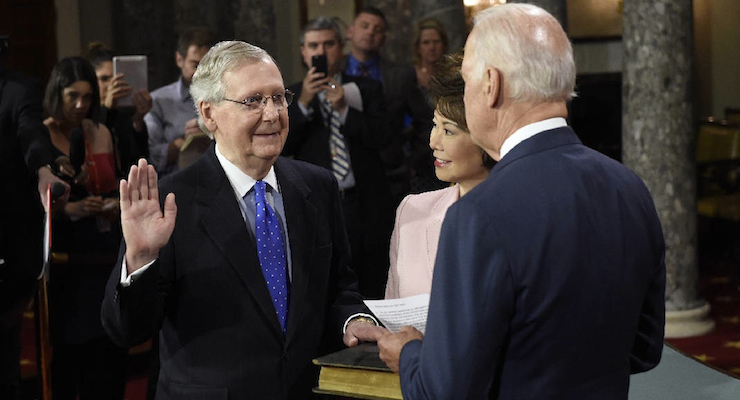 “We’ll have a plan that makes sense for the American people,” the Republican leader said during an interview with The Joe Elliott Show. “If the plaintiff is successful it will require some addressing of the issue, and if that were to happen we’ll be ready to announce our proposal.”

However, according to a congressional aide who spoke to PPD on Tuesday, Mr. McConnell is trying to avoid the the inevitable blowback from Republican base voters who are about to find out that he intends to “fix the subsidies.” Senate leadership, according to the source, will not support efforts by House Republican leaders to repeal — let alone replace — aspects to the law McConnell and others have long promised to do away with.

“House leaders are frustrated, if that’s the right word,” the aide said. “The plan the majority leader outlined last week to House members — to end IPAD (Independent Payment Advisory Board), stop the cuts to Medicare, repeal the medical device tax — this is all low-hanging fruit. But the Senate apparently has a different plan. And that plan is to fix the subsidies.”

For conservatives, who have long-warned against blindly believing McConnell’s campaign promises, the revelation wasn’t at all surprising.

“Unfortunately, there are a number of Senate Republicans who are already planning to surrender and snatch defeat from the jaws of victory,” Senate Conservatives Fund President Ken Cuccinelli said in an email. “These Republicans, led by Senate Majority Leader Mitch McConnell, believe that they should SAVE ObamaCare by amending the law to affirmatively extend the subsidies to every state. This would be the ultimate betrayal of the voters who gave them the majority last year after they promised to repeal ObamaCare, ‘root and branch.'”

In fact, Mr. McConnell’s state is one of only a handful of Republican-controlled states that won’t be impacted by the Supreme Court ruling in King v. Burwell expected this month. The case addresses the legality of subsidies offered in states that refused to set up a State-Based Marketplace. Because Kentucky did setup a State-Based Marketplace, the ruling is somewhat irrelevant to his constituency, whom overwhelmingly support repeal of the law.

“These spineless Republicans are so worried about being blamed for a law they opposed that they’re willing to break their promises and bail it out,” Cuccinelli added. “If the Supreme Court stops the President from illegally spending $20 billion on subsidies, illegally subjecting Americans to the individual mandate, and illegally forcing employers to comply with the 30-hour rule, the last thing Republicans should do is make these policies lawful.”

The BlueGrass State is often cited by proponents of the law as a notable success story, though this argument fails to go beyond the 223,335 top-line enrollment number. According to the latest numbers from the Health and Human Services Department (HHS), out of the 153,920 in the state that have begun to apply for coverage in 2015, only 94,447 have completed their applications.

Out of the 106,330 who have selected a plan from the marketplace — versus the 152,529 eligible for Medicaid enrollment and 138,320 eligible to receive subsidies — only 39 percent are active enrollees in the state. The misleading top-line HHS number, consequently, also includes the 35 percent of Kentuckians who are automatic enrollees.

No wonder McConnell wouldn’t discuss the details of what Senate Republicans would do if subsidies for people in at least 34 states disappear. He apparently plans to pass legislation that will make the nation as a whole mirror the “success” in his own state. Of course, conservatives contend that Republicans should allow the Democrats to reap what they have sown.

“If people lose their subsidies as a result of the Court’s decision and have trouble paying for coverage, Democrats should be held accountable for the health care takeover that raised premiums in the first place,” Cuccinelli said. “ObamaCare was passed by President Obama and the Democrats and it’s more unpopular than ever. This is not the time to surrender.”

Yet, despite the falling poll numbers and rising premium and out-of-pocket costs, that is exactly what Republican Senate leaders plan to do.

“We’ll let you know depending on the outcome of the decision,” McConnell replied when asked.