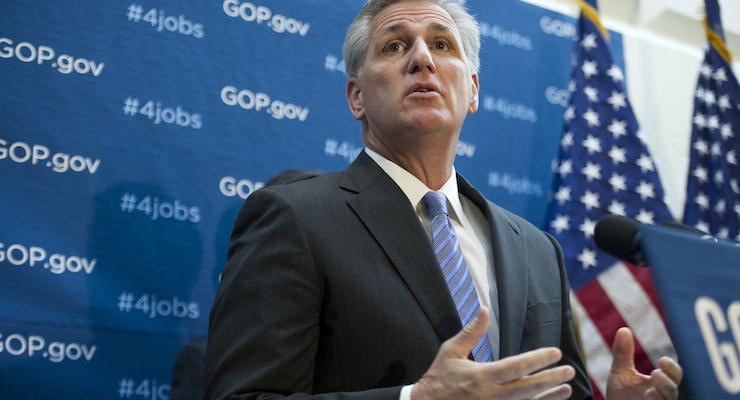 A memo from House Majority Leader Kevin McCarthy, R-Cali., reveals GOP leadership is planning votes to repeal ObamaCare provisions a few days before the Supreme Court hands down a decision that could gut the president’s signature health care law.

According to the memo, the Republican-controlled House will vote the third week of June to repeal the tax on medical devices, and the law’s provision that gives a board of appointees the power to cut Medicare doctor payments if the program’s spending grows beyond expectations. Considering the Congressional Budget Office (CBO) announced last year they can no longer stand by their initial projections claiming budget neutrality on the law, but rather revised their spending estimates to reflect a budget-busting program, the latter is likely.

The formation of the Independent Payment Advisory Board, or IPAB, is dependent upon the growth of spending as a result of ObamaCare, and has been one of the most controversial provision in the law.

However, despite the law’s deep unpopularity and the fact the planned vote will not repeal the law in its entirety, the memo indicates the GOP will not offer a single alternative solution.

“Beyond Obamacare’s added costs, reduced choice and access to Medicare Advantage plans for seniors, the law’s 15 person Independent Payment Advisory Board acts as a de facto rationing body through arbitrary cuts to providers that can effectively stop access to care in order to control costs,” McCarthy wrote.

The proposed vote will come down just days before the Supreme Court is expected to hand down the King v. Burwell decision, which could end ObamaCare subsidies for the millions of Americans who purchased health insurance plans through the federal marketplace online. The lower federal courts have ruled that the administration and the IRS knowingly and illegally offered subsidies to those living in states where state-based exchanges were rejected.

While the administration’s lawyers argued the law intended to allow for the practice, in truth, Democrats were unable to revise and introduce amended legislation to do just that because they lost their House majority and multiple Senate seats in the 2009 – 2010 elections. In particular, the election of former Massachusetts Sen. Scott Brown in a devastating upset victory to replace the late Democratic Sen. Ted Kennedy forced House Democrats to pass the bill that did not provide for subsidies through the federal exchange.

ObamaCare architect Jonathan Gruber was caught on video admitting the subsidies weren’t permitted by the law, and set off a political firestorm last year when another video surfaced of Gruber saying Democrats and the president relied upon a “lack of transparency” and “the stupidity of the American voter” to pass the bill.

Regardless, the GOP runs the risk of facing the wrath of voters if they are blamed for already-skyrocketing healthcare costs climbing even higher as a result of the lawsuit. Yet, in the face of this risk, the House majority leader’s memo doesn’t prioritize an alternative.

To be sure, the cost of healthcare in 2016 was destined to give voters a rate shock simply because the law backloaded much of the law’s cost increases to avoid the 2014 elections. This week, insurance companies around the nation began providing states with their proposed premium rates for 2016, which include premium rate hikes of up to 51 percent in New Mexico and more than 30 percent in Maryland and Tennessee.

Up until now, premium increases, though a reality, have been modest compared to the out-of-pocket cost increases under the Affordable Care Act, or ObamaCare. Sky-high deductibles have thus far offset the necessary cost increases, but premiums were always on the time and will inevitably rise.

BlueCross BlueShield of Tennessee, for instance, which is the state’s largest insurance provider, requested to raise premiums by an average of 36.3 percent.

In addition to the ObamaCare repeal votes, according to the memo, the House is also planning a vote on various Medicare-related measures. In piece of legislation, the GOP would delay the government’s authority to terminate privately-run Medicare plans that underperform, while another would require the government to annually report on enrollment data for such plans.

Aside from related medical cures bill recently passed by the Energy and Commerce Committee, McCarthy offered no plan to counter the rising costs of healthcare or provide political cover for the party.